Cardano Price On The Verge Of Getting Overbought

Looking at the Cardano price chart, we can see that ADA has chart four straight bullish days, wherein it jumped from $1.57 to $2.20. The MACD shows increasing bullish market momentum. However, this surge has pushed the relative strength index (RSI) into the overbought zone, so a bearish correction could be around the corner.

Cardano price has a robust support barrier at $2.10. Previously, at this level, nearly ~60,000 addresses had purchased ~1.65 billion ADA tokens.

Billionaire and entrepreneur Mark Cuban recently had a conversation with Cardano’s founder Charles Hoskinson on Twitter. Hoskinson responded to Cuban when he questioned what ADA can actually be used for.

Hoskinson revealed that they had rebuilt their entire smart contract model, among other things, to which Cuban said that he was “rooting" for him.

The more valid options the better for all of us! But as I’ve been tweeting, for the foreseeable future, it all comes down to utility and marketing. When you have some apps you think I could benefit from, I’m happy to try them out.

Hoskinson followed this declaration up with a video, which he directly addressed to Mark Cuban. In the video, he explained further about ADA and exposed some of the failings of Ethereum. The ADA creator was one of the eight founders of Ethereum. However, he parted ways with the blockchain company in 2014 after a dispute with co-founder Vitalik Buterin.

Around the same time, Mark Cuban responded to a follower who suggested ADA could be used for merchandise purchases at the businessman’s NBA team, the Dallas Mavericks. In his response, Cuban stated he would be “happy to sell for ADA”, providing the payment processor BitPay will accept it.

Before his ADA conversation with Charles Hoskinson, Mark Cuban was tweeting about DOGE. When asked what the point was behind the meme-inspired altcoin when it was inflationary, Cuban explained:

Doge has “deterministic inflation” meaning the amount of inflation is defined. There is no uncertainty as to the amount of created and it’s inflation percentage. Which could allow it to grow as a valid payment mechanism. The unknown is whether enough people will use it this way.

Cardano Social Dominance On The Rise 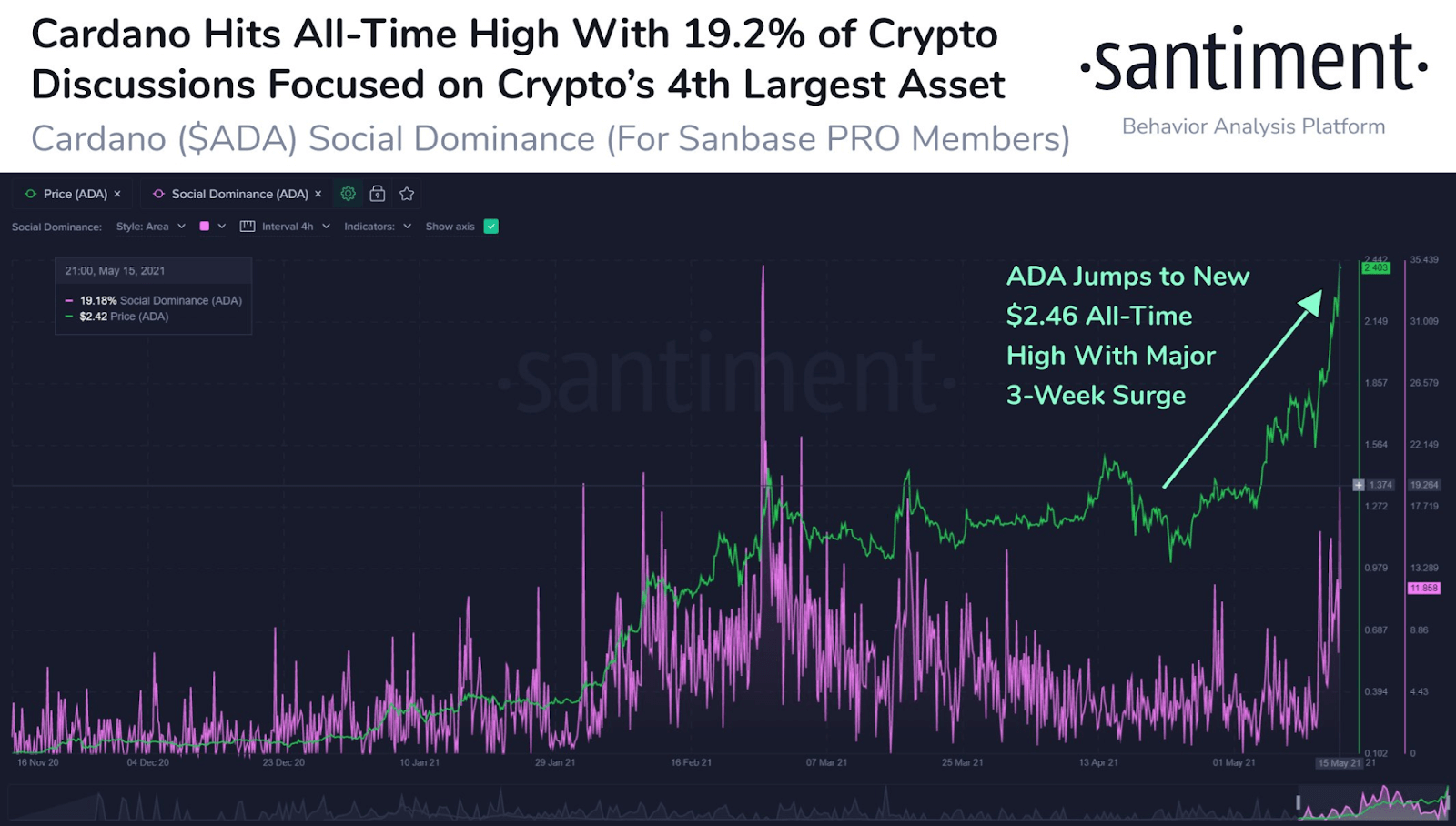 "#Cardano has hit a new #AllTimeHigh of $2.46, and is unsurprisingly the fastest rising topic in #crypto, according to our social data. $ADA's price has now jumped a staggering +2,255% in 6 months, and is having its highest social dominance in 11 weeks."

The Cardano price could potentially jump to the $2.25 level before it faces inevitable bearish correction. On the downside, there is a health support wall at $2.10, which is robust enough to absorb a lot of selling pressure.