This Monday, the Cardano price dropped from $1.42 to $1.28, and below the $1.40 and $1.30 levels. The relative strength index (RSI) shows that ADA could drop some more before it gets oversold. The MACD shows increasing bearish market momentum so a further drop is in the cards.

As per the IOMAP, the Cardano price has crucial support at $1.20. Previously, at this level, almost 105,000 addresses had purchased over 1.4 billion ADA tokens.

Popular blockchain platform Cardano and open-source blockchain payment network Stellar Lumens are attracting the attention of institutional investors, as per digital asset investment firm CoinShares. In a new report on the crypto markets, CoinShares disclosed that while many assets are losing institutional money, ADA and XLM are receiving positive inflows from sophisticated investors.

In the same week, CoinShares added that Ethereum saw total outflows of $12.7 million. Meanwhile, Bitcoin saw outflows of $10 million. ADA and XLM funds are up, despite the entire digital asset investment product suite seeing outflows of $21 million. On the month, most crypto funds are in the positive, except for Bitcoin, which has seen $156.8 million worth of outflows month-to-date. 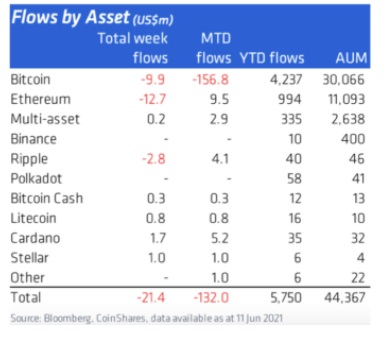 As institutional money appears to be fleeing the market, the entire crypto sector recorded a $1.52 trillion valuation.

The Cardano price is falling towards the $1.20 support wall. A further break will take ADA to the $1.10 support.