This Tuesday, the Cardano price has crashed from $1.10 to $0.958. However, ADA has found support at the 20-day SMA, and has since managed to jump above the $1-line. Let’s take a closer look at the technical analysis.

Cardano Price Has Reversed Sentiment From Bearish To Bullish

Over the last two days, the Cardano price has jumped from $0.96 to $1.12. The MACD also shows sustained bullish momentum, which gives proper credence to overall bullish outlook. This Thursday, ADA tried to touch the $1.20 resistance wall and have since dropped down.

However, this retreat looks like a temporary setback for Cardano price. On the upside, there is a lack of strong resistance walls. On the downside, there is an immense support barrier at $1, wherein 71,000 addresses had purchased at least 3.6B ADA tokens.

The 4-hour Cardano price chart has flipped the parabolic SAR from bearish to bullish, which shows that the current market sentiment is positive.

IOHK (the company behind Cardano) recently announced that the “Mary” protocol update (which will require a hard fork) will be applied to the mainnet on March 1. 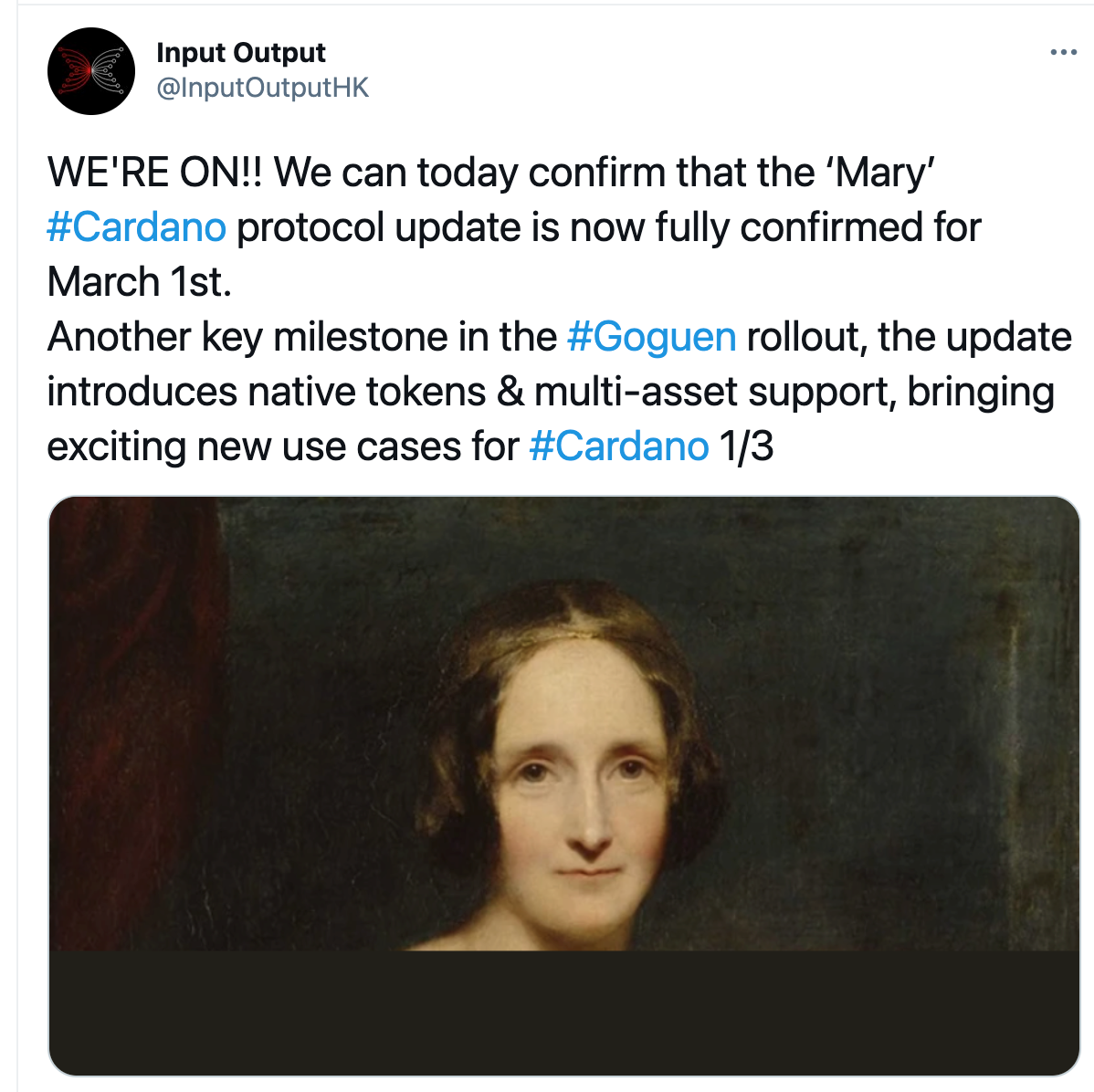 The Mary protocol is an important part of the rollout of phase 3 (Goguen) of Cardano’s development. According to the Cardano roadmap, the Shelley era decentralizes the core of the system and Goguen adds the ability to build decentralized applications (DApps).

The Goguen era is more than just about adding support for smart contracts. An excerpt from the roadmap reads:

Goguen will also see improvements to the core Cardano offering. Most significantly, the addition of a multi-currency ledger will extend the usefulness of Cardano even further, enabling users to create new natively-supported tokens. This will allow the creation of fungible and non-fungible tokens, supporting the creation of new cryptocurrencies on Cardano as well as the tokenization of many types of digital and physical assets.

In a medium post, Cardano Foundation’s Elliot Hill explained the impact that the Mary hard fork will have on the Cardano ecosystem. He said that while smart contracts are arriving soon and will form an important part of the ecosystem, they are not required to create a native token on the blockchain network. In other words, as soon as the mary hard fork is completed, users can create “user-defined native tokens” on Cardano and start using their newly-created assets.

Hill added that native assets could be used to mint non-fungible tokens (NFTs), which can be used to represent a huge range of unique real-world and digital assets. He added:

For example, an NFT could be minted which represents a fractional equity stake in a forestry biodiversity initiative. This could be traded on digital asset exchanges, and held by those looking to offset their carbon footprint via the Cardano blockchain. Alternatively, a Cardano-based native NFT could be used for creating a unique work of digital art 71 stored on the blockchain forever. Such NFTs have seen growing popularity among blockchain enthusiasts 34, with utility in both online gaming and the world of collectibles.

He then went on to say that the ability to create native custom tokens “representing stablecoins, wrapped assets, and lending protocol utility tokens” will be crucial in bringing the world of DeFi to Cardano.

Cardano price is expected to breach the $1.20 resistance barrier by leveraging this current bullish wave.