Cardano Technical Analysis: ADA Fails To Push Beyond $2.40, Slips Back In The Red

The Cardano price failed to push up towards $2.40 over the weekend, with the 50-day SMA acting as resistance and pushing the price down. ADA rose by a significant margin of 13.88% on Wednesday to push up to $2.25 and then rising further on Thursday to move up to $2.32, where the 50-day SMA was acting as resistance. Friday saw the price fall by a little over 2% to drop to $2,27 before marginally recovering on Saturday. After hitting its all-time high at the beginning of the month, ADA has endured an extremely bearish month.

Cardano Price Chart Indicates Sellers Could Push Price Down to $2

The Cardano price started the previous week on a bearish note, falling by nearly 7% on Monday (13th). A recovery on Wednesday saw the price push up to $2.50 before falling by 3.52% on Thursday and a further 2.85% on Friday. Although the price did recover marginally on Saturday, it fell back on Sunday, falling by over 3.76% on Sunday to slip below the 50-day SMA and settle at $2.283. Monday saw ADA continue on its bearish streak, as the price fell by 8.87% and dropped to $2.08. 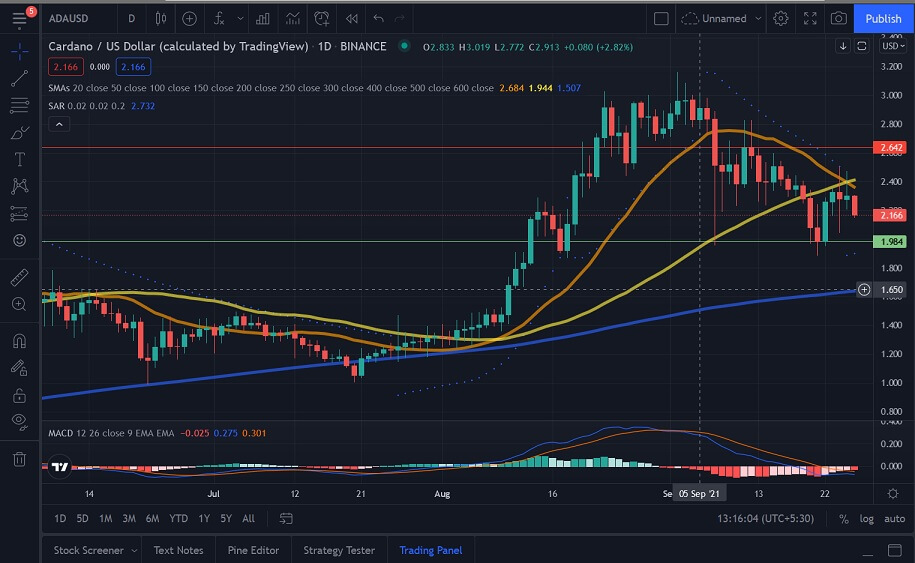 Tuesday saw the Cardano price endure another significant fall, as it fell by 4.64% to slip below $2 and drop to $1.98. However, ADA found support at this level and rallied strongly, as the price pushed up by 13.88% on Wednesday, as it rose to $2.25, with Thursday registering a rise of 3.07%, pushing ADA up to $2.32 by the end of Thursday. Friday saw the price drop once more, falling by 2.10%, before rising marginally on Saturday to settle at $2.30. However, with the 50-day SMA and the 20-day SMA performing a bearish cross, the current session saw ADA back in the red, having already lost over 6%. With the MACD and the Parabolic SAR both bearish, we could see the price fall even further during the current session.

Looking at IntoTheBlock’s IOMAP for the Cardano price, we see that ADA faces strong resistance at around $2.45. At this level, nearly 71,000 addresses have sold over 2.5 billion ADA. 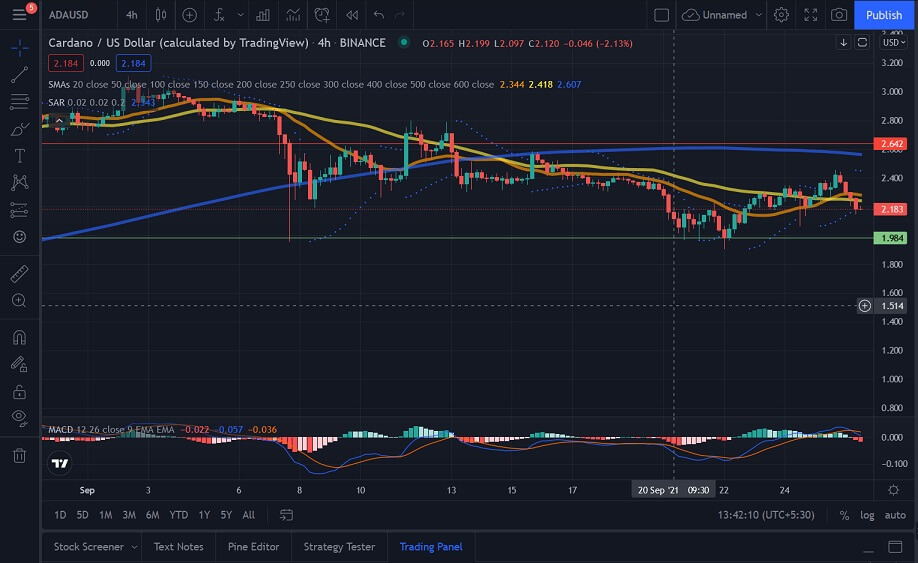 Speaking at the Cardano Summit 2021, Hoskinson said that while the main idea was to create a network where users can move seamlessly from one space to another, the underlying business infrastructure has remained “ossified.”

“We think there’s a lot of intersection between the use of identity the movement of data capacity exchange and other things that can be done and explored. And it can be done at a scale of millions to tens of millions, and eventually at a global scale. So, this is a super exciting relationship we can’t wait to see how it goes.”

The IOHK founder added that he hopes the partnership will transform the entire model of the Telecom industry despite the challenges of implement blockchain technology into the field.

According to him, millions of DISH users will have network connectivity with Cardano without the influence of centralized corporations. If it becomes successful, it could turn into the default business model for the telecom space.

DISH is one of the largest Telecom services, with over 19 million customers, that gives users complete control of every aspect of their accounts. The company is also one of the first public companies to accept crypto payments.