Cardano Technical Analysis: ADA Has Been Trending Horizontally Around The $1.20 Level

The Cardano price has been trending horizontally for the last five day in a narrow $0.03 channel between $1.20 and $1.17. The buyers and sellers are effectively cancelling each other out. Let’s take a closer look with technical analysis.

The buyers and sellers have been engaged in a tug-of-war. As such, the price is hovering around the $1.20 line with very low volatility. The MACD shows that the overall market momentum is bearish. The 20-day SMA on the downside has repeatedly stopped ADA from dropping any more.

The IOMAP tells us that the $1.20 line is extremely strong. Previously, at this level, over 142,000 addresses had purchased a little less than 4 billion ADA tokens. On the downside, the 20-day SMA ($1.15) is robust enough to prevent further downward slides. 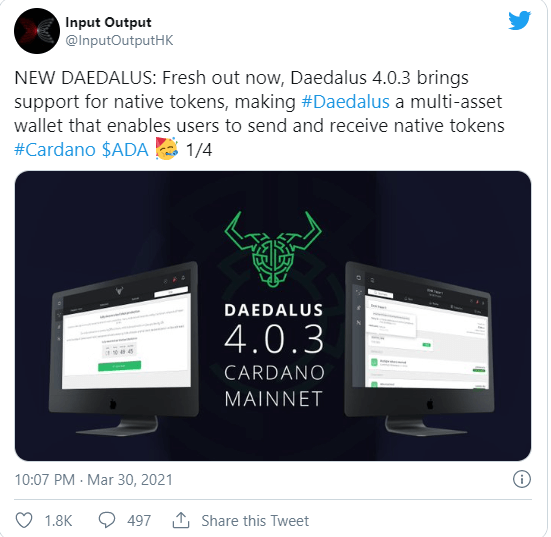 As per Daedalus 4.0.3 release notes, the most important new feature is support for native tokens. Wallet addresses can now receive both ADA and native tokens contained in a single Cardano transaction. Available native tokens appear in the token section of the Wallet Summary screen, where the balance for each of the tokens is shown.

When using native tokens, transaction fees are paid in ada, and some ada needs to be sent with every transaction for network protection against attacks.

Notably, Daedalus is “a download-only full node wallet for Linux, Mac and Windows PCs” and “it is NOT available as an Android or iOS mobile app.”

The Cardano price will likely keep trending around the $1.20 level.