The Cardano price has been on a serious upsurge since July 21. During this rally, it has gone from $1.05 to $1.39. As things stand, ADA is looking to enter the $1.40 psychological level and touch the $1.45 resistance barrier. During this jump, Cardano managed to:

The MACD indicates that the overall market sentiment is positive.

The Cardano price faces a massive resistance at $1.45. Previously, at this level, around 86,000 addresses had purchased nearly 663.000 ADA tokens.

Cardano founder Charles Hoskinson recently dismissed technical analysis published by veteran trader Peter Brandt suggesting that the price of ADA could soon plunge after forming a pattern similar to one Litecoin saw in 2018.

In an Ask Me Anything (AMA) session, Hoskinson dismissed the technical analysis, suggesting that markets are now too complicated for it to work and even likening it to “voodoo” that doesn’t make sense. His words came in response to Peter Brandt showing a head and shoulders pattern has formed on ADA’s chart. 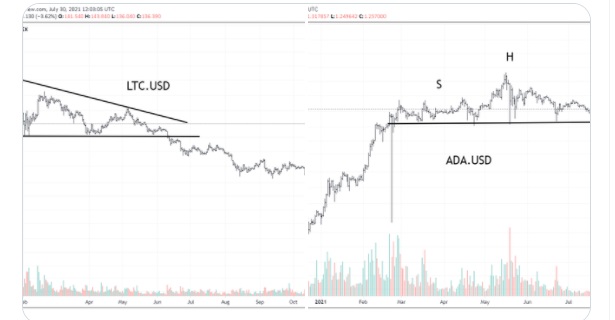 "I remember being scoffed at unmercifully when I identified this top in $LTCUSD back in mid 2018 Hey Cardano trolls $ADAUSD , take aim..."

A head and shoulders pattern is a chart formation that appears as “a baseline with three peaks,” with the one in the middle being the highest and the other two being close in height – forming what resembles a head and two shoulders.

In technical analysis, a head and shoulders pattern is used to predict a bullish-to-bearish trend reversal. It is “believed to be one of the most reliable trend reversal patterns.”

Per a CryptoSlate report, Hoskinson noted that Brandt’s call was “strictly a technical and not fundamental analysis based on his interpretation of arbitrary charts.” He added that markets nowadays are too evolved for such analysis to work, saying:

"Technical analysis worked well before computers, and when people were trading with some degree of intuition, or along with fundamental analysis. In the age of quants and AI black box models and big data and these things, looking at a simple chart for candles, it makes no sense at all."

If the buyers do manage to push the Cardano price above the $1.45 resistance barrier, ADA should reach the next strong resistance at $1.60.