The Cardano price is currently moving horizontally below the $1.20 level. The price may even touch the upper Bollinger Band curve, if they somehow break above the $1.20 resistance line. However, this seems highly unlikely.

Now, when you look at the IOMAP, you can see that the Cardano price has quite the challenge at $1.20. 79,000 addresses had previously purchased 2.7 billion ADA tokens here.

From March 31, 2021, ADA stakers will be responsible for all blocks on the Cardano mainnet. The Cardano blockchain is currently in its last phase (epoch), in which federated nodes are helping stake pool operators in block production. On March 31, the d-parameter will be reduced to zero. 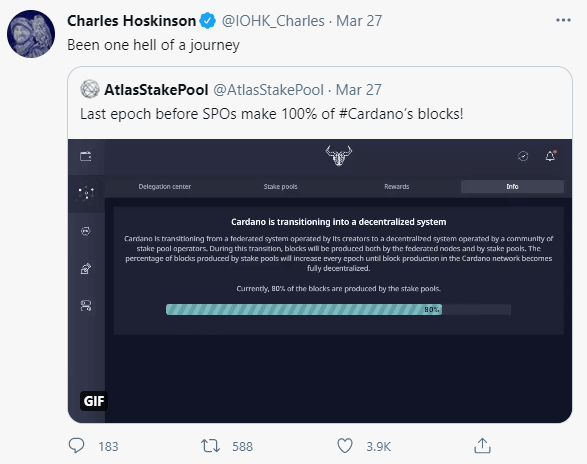 IOHK (the firm behind Cardano) recently submitted a proposal to implement the update into Cardano's codebase. As a result, at the boundary of epoch 257, the d-parameter will finally be reduced to zero. Since the launch of ADA staking, the hard-coded mechanism reduced it by 2% (0.02) per epoch. Hence, more and more computational power from the staking pool entered the network.

Furthermore, Cardano is adjusting another decentralization metric, the k-parameter, which prevents large-scale pools from gaining control over block production. This erases the risks of Cardano evolving into a "whale-dominated" blockchain.

Is Cardano The Next Top NFT Platform?

Charles Hoskin, the creator of Cardano, recently said that the blockchain network is looking to become one of the best NFT (non-fungible token) platforms. In a new Periscope stream, Hoskinson said that Cardano already has the technology that would enable it to make a big difference in the booming sector.

What’s cool is that a lot of these problems about metadata, identity, authentication, problems about governance, we have native capabilities built into Cardano from Catalyst to our metadata standard, to how we handle native multi-assets that I think will make us, probably long term, one of the best platforms to issue, curate, and transfer, an NFT from one party to another party.

Hoskinson noted that they plan to succeed in the NFT space by anticipating the sector's movements in the next decade and a half. The Cardano creator added that the platform is teaming up with some big names in the NFT marketplace.

Just in NFTs, we’ve already approached several of the top 10 marketplaces and already begun discussions porting them over to Cardano because why not? It’s an easy conversation. It’s just engineering resources and we’re scaling up capacity there specifically for these types of relationships.

The Cardano price will keep trending horizontally below $1.12. A break above this could take ADA to $1.15.