Chainlink Price Analysis: LINK Falls Further As It Fails To Push Beyond $25

The Chainlink price is back in the bearish territory after a positive weekend that saw the price rise towards $25. On Thursday, the price did push above $25, but Friday saw LINK fall by a significant margin to drop to $23.81. However, a weekend recovery saw LINK push back towards $25, with market watchers anticipating LINK crossing $25, but Monday saw the bearish sentiment return as LINK fell to $23.02. The current session sees both buyers and sellers vying to take control of the session.

The Chainlink price had rallied spectacularly to push above $30 on the 14th of September and move above the 200-day SMA and the 20-day SMA during the same session. However, LINK’s fortunes changed after this point as the price dropped on Wednesday and Thursday to fall to $29.81. Friday saw a significant fall of over 7%, pushing LINK below the 200-day SMA, as it settled at $27.71. On Saturday, a marginal recovery saw LINK rise up to $28.40 before it fell back on Sunday, settling just above the 50-day SMA at $27.40. LINK continued to remain bearish on Monday as it fell by a staggering 14.5% to drop below the 50-day SMA and settle at $23.55. Tuesday saw more of the same, with the price falling by 9.14% to drop to $21.40. 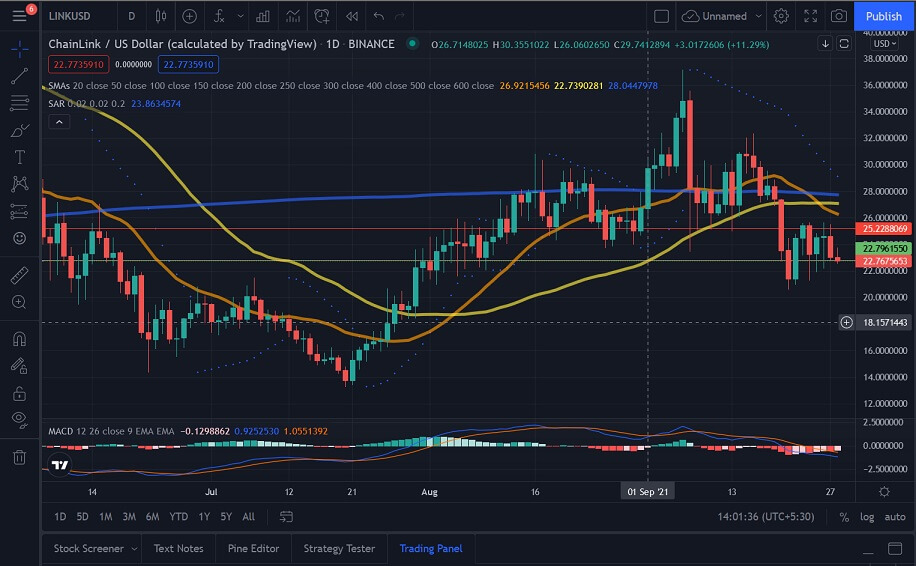 The Chainlink price recovered strongly on Wednesday as it rose to $24.46, a rise of over 14%. Thursday saw another increase of 3.93%, as LINK settled at $25.42. However, LINK could not sustain this level and fell drastically on Friday to drop to $23.28. The weekend saw another recovery as LINK rose by 5.32% on Saturday and then recorded another marginal increase on Sunday to end the week at $24.61. However, the current week started on a bearish note, and LINK was down by 6.45% on Monday. With the current session also seeing the price in the red, we could see the price fall further, as indicated by the bearish MACD and Parabolic SAR.

Looking at IntoTheBlock’s IOMAP for the Chainlink price, we see that LINK faces strong resistance at around $23.25. At this level, over 19,000 addresses have sold over 77 million LINK.

The 4-hour Chainlink price chart indicates that LINK has been relatively bearish during the past few sessions. LINK had fallen below the 20-bar SMA on the 24th when it fell to $22.25. The price recovered from this level and pushed up to $23.33, but with the 20-bar SMA now acting as support, it could not push beyond this level and fell to $22.72. However, the price rallied from this point and moved above the 20-bar SMA to settle at $24.52. But with the 50-bar SMA acting as resistance at this level, the price fell back to $22.79. Another rally saw LINK push beyond the 20-bar SMA and the 50-bar SMA to push to $25.12. However, the price took a bearish turn and fell below the two SMAs to the current $22.96. We can see that the MACD and the Parabolic SAR have both flipped to bearish, indicating that LINK could fall further. 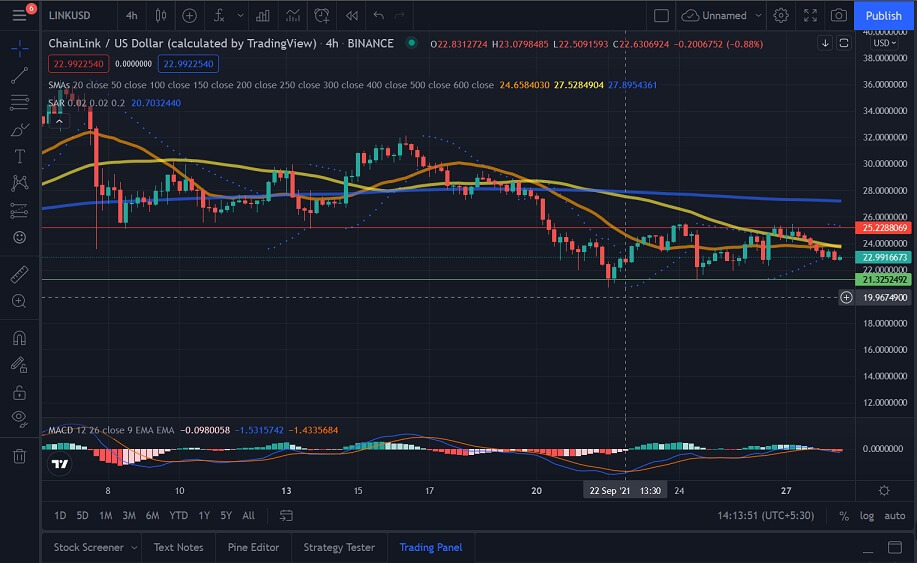 Looking at the Chainlink price chart, we see that LINK has started this week on a bearish note, which could continue today with sellers starting to take control. If that happens, we could see LINK drop towards the $20 mark.