The Chainlink price had slipped below the 20-day, and 200-day SMA on the 8th (Wednesday) as LINK endured an extremely bearish week. However, it recovered over the weekend after finding support at $26.36, rising up by 2.44% on Saturday to settle at $27. Sunday saw a significant rally of over 9% that saw TRX push up above the 20-bar SMA and the 200-bar SMA to settle at $29.44, just short of the $30 mark. However, LINK could not carry this momentum into the new week and started Monday back in the red, falling by over 8% to slip back below the 20 and 200-day SMAs.

Although the Chainlink price enjoyed a very bullish start to September, that saw its price push up to $34.81 at the start of the previous week. However, Tuesday saw LINK endure a drastic fall, when it fell by 18%, going below the $30 mark and settling just above the 20-day and 200-day SMA. However, Wednesday saw the price fall even further, with sellers managing to successfully pierce the 20 and 200-day SMAs that were acting as support. LINK ended Wednesday at $27.17, and although the price did see a recovery on Thursday, Friday saw the price fall even further, falling by 5.83% to settle at $26.36. 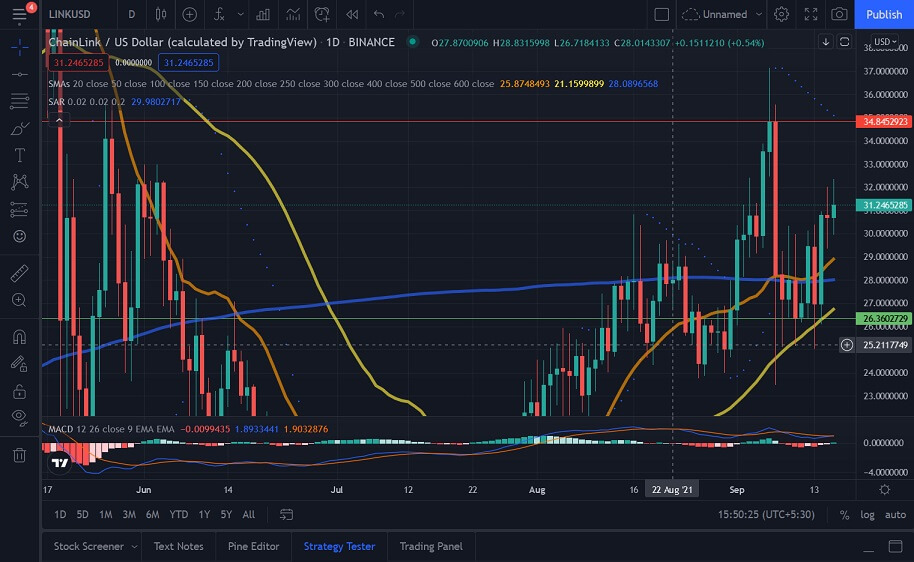 After falling to $26.36, the Chainlink price recovered over the weekend, rising by over 2.44% to settle at $27 on Saturday. Sunday saw LINK rise by over 9%, pushing above the 200-day and 20-day SMA group, settling at $29.44. However, LINK fell significantly on Monday, slipping back below the 20-day SMA and the 200-day SMA. The price recovered on Wednesday and rallied strongly by over 14% to push back above the SMAs and past the $30 level before a very static session on Thursday that saw its price fall marginally. The current session sees LINK back in the green, with the price currently at around $31. We can see that the MACD has flipped to bullish, indicating that we could see the price push up higher during the current session.

Looking at IntoTheBlock’s IOMAP for the Chainlink price, we can see that LINK has strong support at around the $27.97 level, where over 23,000 addresses have bought over 31 million LINK.

Looking at the 4-hour Chainlink price chart, we can see that both the 20 and 200-bar SMAs were acting as resistance. However, LINK pushed past both on the 12th, rising to $29.40, where the 50-bar SMA was acting as support. LINK fell back from this level by 6.60% to fall below the 20 and 200-bar SMAs, and then further down to $26.34 by the 13th. The price recovered but could not go past the 20-bar SMA, settling instead at $27.24. The LINK price then rose significantly on the 14th, pushing beyond the 20,200 and 50-bar SMAs, reaching $30.80. The price rose further as a result of the bearish cross between the 20-bar SMA and the 200-bar SMA and later on the 20-bar SMA and the 50-bar SMA. Currently, we see that LINK is at $31.27, with both the Parabolic SAR and the MACD bullish; we could see LINK push higher during the current session if the buyers can retake control of the session. 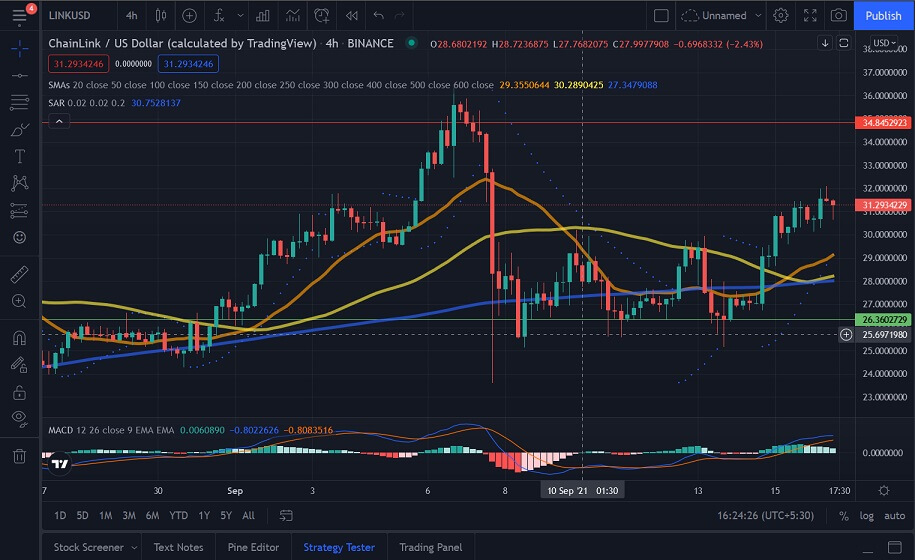