The Chainlink price currently finds itself in bearish territory after sellers took control of the market on Sunday and have pushed LINK down to below $25 during the current session. After being in the red for most of last week, LINK had pushed up to $27.45 on Saturday. However, the price fell back on Sunday as LINK recorded a significant fall that pushed the price below the 50-day SMA. Monday saw the price pierce the 20-day SMA too as LINK continued to fall, with sellers in control of the current session as well.

The Chainlink price had started October on a very bullish note, which tapered off and has now finally turned bearish. The price registered an increase of 9.67% on Friday (1st) as LINK rose to $26.32. The price remained bullish over the weekend as the price pushed up by 2.27% on Saturday and then 2.42% on Sunday to push up to $27.57 and settle above the 50-day SMA. However, despite the bullish sentiment, LINK fell back into the red on Monday as the price dropped to $26.62 before recovering again on Tuesday and rising to $27.24. However, LINK fell again on Wednesday after a highly volatile session, dropping to $26.80. 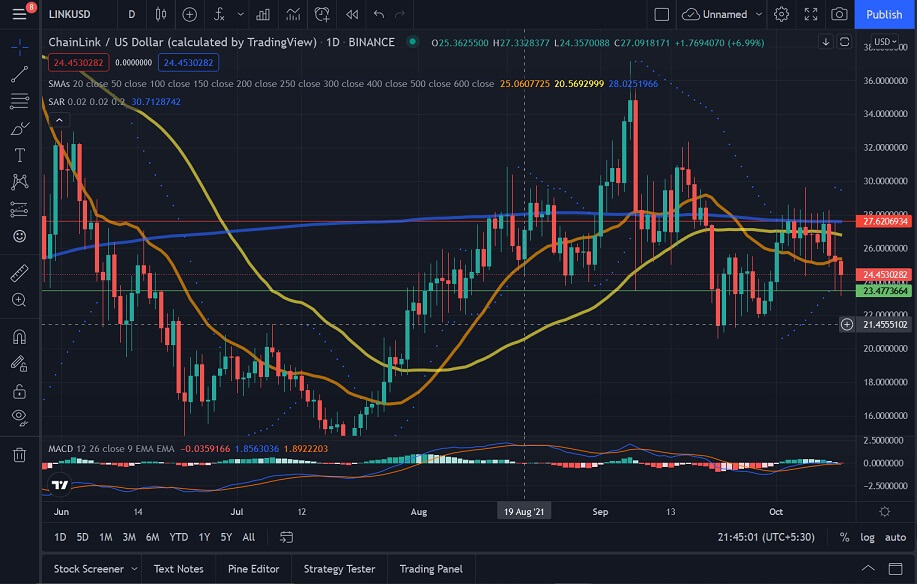 After falling to $26.80 on Wednesday and slipping below the 50-day SMA, the Chainlink price did not register much movement on Thursday, registering only a marginal drop. However, the price recovered on Saturday, as LINK rose by over 4%, moving to $27.45 before seeing a significant drop on Sunday that saw LINK fall by 6.87%, slipping below the 50-day SMA and settling at $25.56. The price continued to drop on Monday as it fell below the 20-day SMA and slipped below $25. The current session sees LINK firmly in the red as sellers control the session. We can see that the MACD has flipped to bearish, and so has the Parabolic SAR, indicating that we could see the price drop further.

IntoTheBlock’s IOMAP for the Chainlink price indicates that LINK has strong support at around $23.37. At this level, more than 27,000 addresses have bought over 69 million LINK.

The 4-hour Chainlink Price chart clearly shows the bearish sentiment setting in, with LINK seeing a significant drop. LINK had been relatively bullish as the price rose to $27.35, pushing above the 20-bar SMA and the 200-bar SMA. However, the price could not maintain this level, as it dropped to $26.37, slipping below the 20, 50, and 200-bar SMAs. However, the price recovered strongly, rising to $27.09 and then to $27.45 before turning bearish and dropping to $25.56, slipping below all three SMAs. The price rose to $26.49, but with the 200-bar SMA acting as resistance, it fell sharply to $24.05. With the Parabolic SAR and the MACD both bearish, we could see the price fall further. 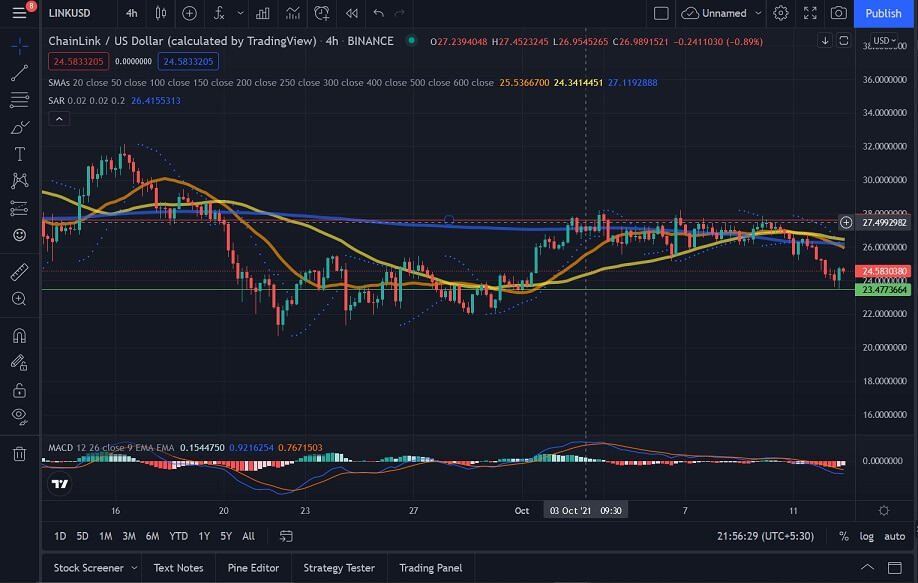 Futureswap To Use Chainlink Price Feeds

Decentralized protocol Futureswap V4 recently announced the integration of Chainlink Price Feeds to support the launch of its on-chain perpetual markets on Arbitrum One.

"We’re now able to offer a decentralized perpetual contract solution that matches the trading experience and precision of centralized alternatives while bringing new levels of transparency and trust-minimization to users."

Futureswap is a decentralized perpetual protocol utilizing automated market-making to provide the best on-chain price execution environment for all markets. In Futureswap V4, traders can go long or go short up to 30x on any asset with a Chainlink Price Feed and a Uniswap liquidity pool on Arbitrum. The new V4 architecture is 10x more liquid for traders, 30x more capital efficient for liquidity providers, and more economically sound.

Oracles are critical in determining if a trade can be liquidated, which directly affects traders. After deploying the successful oracle relayer network in V2, the firm said it decided to use Chainlink in V4 to reduce unnecessary complexities.

"Since Chainlink Price Feeds are now running natively on Arbitrum L2, they update at higher frequencies and lower costs while still maintaining the high data quality and up-time users have come to expect. This is important for Futureswap as users now have strong precision on open/close prices."

Looking at the Chainlink price chart, we see that the LINK price has turned bearish since Sunday. The current session sees the price at around $24, and with sellers in control of the session, we could see LINK drop further to its support level of $23.