Chiliz Price Forecast: CHZ Takes a Hiatus at $0.35 as Bulls Regroup for Another Upward Roll

Chiliz has had a great week since the drop to $0.2 at the beginning of June's second week. A persistent bullish camp pulled the price to $0.35 before another brief correction occurred. The losses toward the end of last week touched the buyer congestion at $0.27, allowing a reflex recovery that brushed shoulders with $0.35 again.

At the time of writing, Chiliz is in the middle of yet another retreat. It is exchanging hands at $0.27 as bulls hunt for higher support, possibly at $0.3. Sliding below this level might extend the losses. Meanwhile, the transaction history model by IntoTheBlock highlights an immense resistance likely to sabotage attempts to extend the recovery.

The In/Out of the Money Around Price (IOMAP) groups addresses that bought Chiliz in bands. These bands also show the volume of the CHZ tokens purchased, vividly highlighting support and resistances.

A glance at the on-chain model reveals the most robust barrier between $0.33 and $0.34. Here, 856 addresses previously bought 341 million CHZ. Trading above this zone would allow bulls to cover some upward ground, but another relatively strong resistance lies at $0.369 to $0.379, likely to sabotage the recovery.

On the flip side, an immense buyer congestion zone runs from $0.3 to $0.31. Here, 1,300 addresses currently profit from the approximately 337 million CHZ previously obtained in this range. In other words, Chiliz could be well supported to avoid the bearish leg from stretching to $0.27 or $0.2.

The bearish outlook described above can be validated by the Relative Strength Index (RSI). Following the recovery to $0.35, the RSI closed the gap to the overbought area. However, it is currently moving toward the midline, emphasizing the growing bearish outlook.

Similarly, the Moving Average Convergence Divergence (MACD) is about to flash a bearish signal on the four-hour chart. In other words, sell orders may rise in the near term, leaving support at $0.3 vulnerable. 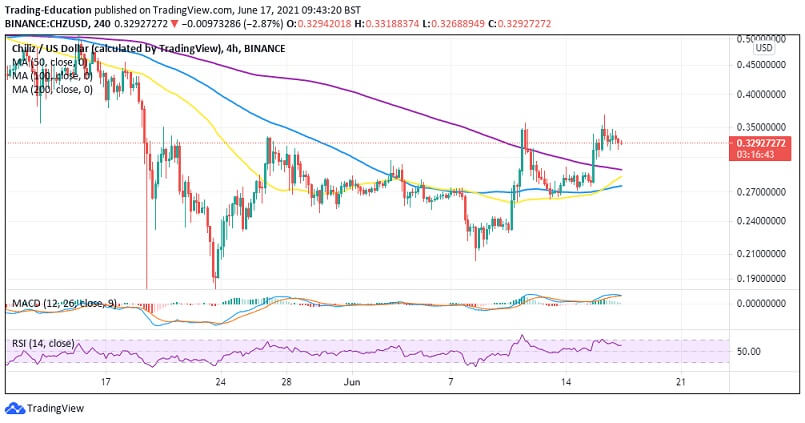 The market value realized value (MVRV) by Santiment has sustained an uptrend following a massive drop to the level of around -45%. At the moment, the metric holds at -19%, implying that Chiliz is in a buy zone and ready for upward price action.

An MVRV ratio of zero and below reveals that most holders are at a loss. Therefore, less likely to sell. When investors are underwater, they prefer to hold, thus reducing the overhead pressure. The uptick in the MVRV ratio shows that investor sentiment is back on track, and recovery should be anticipated.