Chiliz leads recovery in the market on Friday, mainly for the altcoins. The token spiked over 16% to trade weekly highs of $0.28 before a minor retreat to the prevailing market value of $0.27.

Thursday was a yielding day for most investors, but most crypto assets ran out of steam soon after. However, CHZ continued with the uptrend, breaking out of a key technical chart pattern.

Chiliz has formed a symmetrical chart pattern in the four-hour timeframe. This pattern has both bullish and bearish biases. It is created by trend lines, connecting higher lows and lower highs. The lines are supposed to meet at a relatively equal point, as illustrated.

As the trend lines converge, Chiliz is expected to be consolidating, explaining the ranging price action between $0.24 and $0.3 in the last week of May and the first week of June.

A breakout is anticipated before the lines converge as observed. The bullish outlook has a precise 57% target, measured from the highest to the lowest points of the pattern. 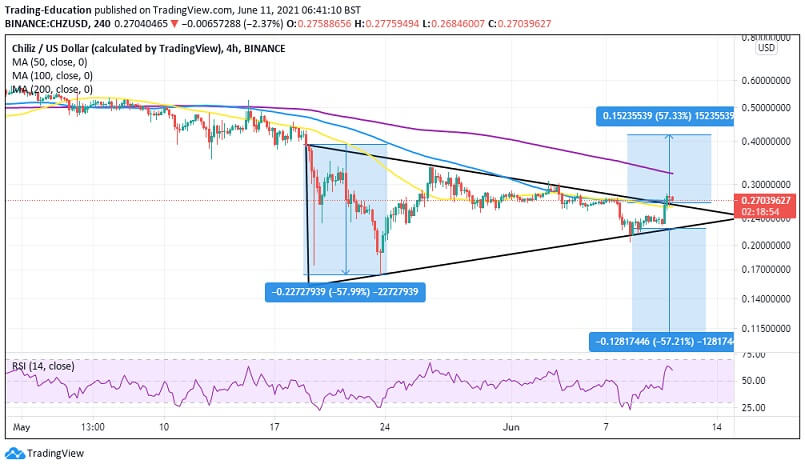 Realize that, with Chiliz trading at $0.27, its immediate upside has been capped at $2.8. On the other hand, the primary downside is protected by the 100 Simple Moving Average (SMA) on the same four-hour chart. It is worth mentioning that the retracement from the short-term hurdle at $0.28 will be invalidated.

If this support is robust enough, bulls will focus on lifting the price higher above $0.3; thus, bring Chiliz closer to the symmetrical triangle target at $0.42.

Subsequently, Santiment’s market value realized value (MVRV) on-chain metric shows Chiliz sliding further into a buy zone. This metric is significant because it shows the profitability or loss ratio of the holders of CHZ.

The on-chain metric has dived to -100% at the moment, which means that investors are in extreme loss. When most investors are at a loss, they are unlikely to sell until they break even. On the other hand, more investors are compelled to buy, thus adding to the tail force. With diminishing selling pressure and a more substantial buyers’ front, Chiliz is bound to resume the uptrend, paving the way for gains eyeing $0.42.

On the flip side, closing the day under the 100 SMA may increase overhead pressure. The 50 SMA is in line to offer refuge, but if broken, the price will be on the way to testing the support at $0.24 and $0.2, respectively.