Chiliz Price Prediction: CHZ settles for consolidation ahead of 44% launch to $0.85

Chiliz made a gradual recovery from support at $0.35 amid the bullish outlook across the cryptocurrency market. The resistance at $0.45 was taken down, allowing bulls to extend their reach to $0.6. Attempts rise further were thwarted, hence the ongoing pivotal movement at $0.5.

The non-fungible token (NFT) supporting platform teeters at $0.5 at the time of writing. Following the correction from $0.6, overhead pressure has increased. On the downside, a confluence formed by the 100 Simple Moving Average (SMA) and the 200 SMA provides immediate support. Holding onto this region will ensure that the uptrend resumes. 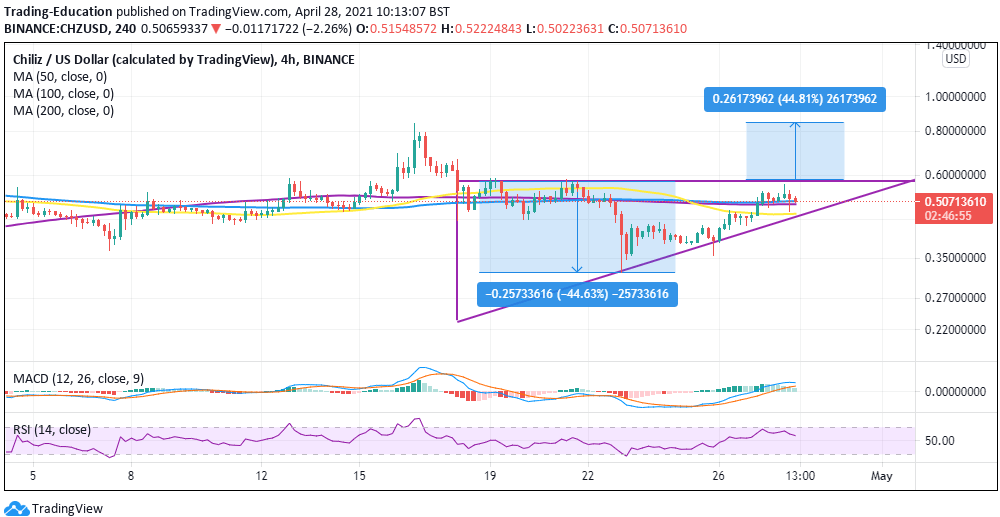 The four-hour chart reveals a bullish formation in the shape of an ascending triangle. This pattern is highly bullish and often results in a significant breakout - two trend lines from the triangle, connecting a series of relatively equal peaks and the ascending lows.

A breakout occurs when the price cracks the hypotenuse resistance. As the consolidation nears an end, buyers prepare to take control as the bearish advances wane. An increasing trading volume affirms the breakout, which has a precise target measured from the highest to lowest points. For instance, Chiliz may rally 44% to $0.85 if the expected breakout occurs in the near term.

Currently, consolidation takes precedence, as confirmed by the 50 Moving Average Convergence Divergence (MACD) indicator's leveling motion. Nonetheless, the trend has a bullish inclination, highlighted by the MACD line holding above the signal line.

The SuperTrend indicator and the Parabolic SAR on the four-hour chart have bullish impulses, as illustrated. The latter flipped bullish recently, moving under the price and changing to green. On the other hand, the Parabolic SAR has sustained beneath the price since April 25, suggesting that the slighted resistance path is north.

At the time of writing, Chiliz struggles to hold above the 200 SMA and the 100 SMA confluence level. Closing the day under this zone may culminate in massive losses. Note that while the ascending triangle is a bullish pattern, there are instances when breakdowns occur. Support at the 50 SMA is key to the uptrend because if breached, CHZ will be looking toward $0.35 and $0.27, respectively.

Chiliz
Top Brokers in
All Regulated Brokers
67% of retail clients lose money when trading CFDs with this provider.