Crypto Crash: Tip of Iceberg Or Blessing in Disguise? Three Things To Watch Out For

Wednesday, May 19, wreaked havoc in the cryptocurrencies market, as the carnage cost almost $1 trillion, in what came through as the bloodiest day in crypto since the Black Thursday crash of 2020.

The world’s most traded crypto assets such as Bitcoin and Ethereum lost nearly 30% of their value at one point during the crash before settling the day lower by almost 15%.

In a matter of three hours, the entire crypto space melted, in an event not seen before. The pioneer cryptocurrency pummelled to $30,000, down nearly 60% from all-time highs near $64,000. Even during the COVID-19 crash in March 2020, Bitcoin's 60% correction was smaller when measured in USD terms.

Meanwhile, the founder of Tesla Inc. tweeted out: Tesla has “suspended vehicle purchases using bitcoin,” out of concern over “rapidly increasing use of fossil fuels for bitcoin mining.” Although Musk tweeted a week ago and also ate up on his words, later on, speculative interests took that as an excuse and liquidations ensued.

Amidst heightened volatility, most cryptocurrency exchanges such as Coinbase and Binance experienced outages as a result of the selloff, compounding the market’s despair.

Some market participants called the crash big funding reset across exchanges amid overleveraged positions, especially after the 500% rise in Bitcoin over the year.

Since then, the crypto market is experiencing a relief rally after the deep correction. Bitcoin has recaptured the $40,000 mark while Ethereum tested $3,000 once again. Ethereum crumbled to $1895 as the sell-off engulfed.

However, with the sheer extent of the crash still unfathomable, investors remain divided over what’s next in store for the crypto markets, as most major coins consolidate.

Some see the crash as a prerequisite for future growth while those who lost faith in cryptocurrencies continue to predict more downside. Therefore, in the aftermath of the turmoil, investors must watch out for these three key things going forward.

Despite the brutal crash, industry experts and on-chain metrics continue to suggest that the ongoing consolidation could give rise to a fresh uptrend, as the traders who lacked conviction are washed off.

According to an editorial by Santiment, Bitcoin’s key on-chain metric showed some healthy signs of bottoming out, with the ‘buy the dips’ strategy likely in vogue.

To elaborate, “Bitmex's BTC funding rate is finally showing a huge spike in negative funding at -0.25%. For comparison, Black Thursday 2020 spiked to -0.38%. We are certainly very very close to negative sentiment in the space.” 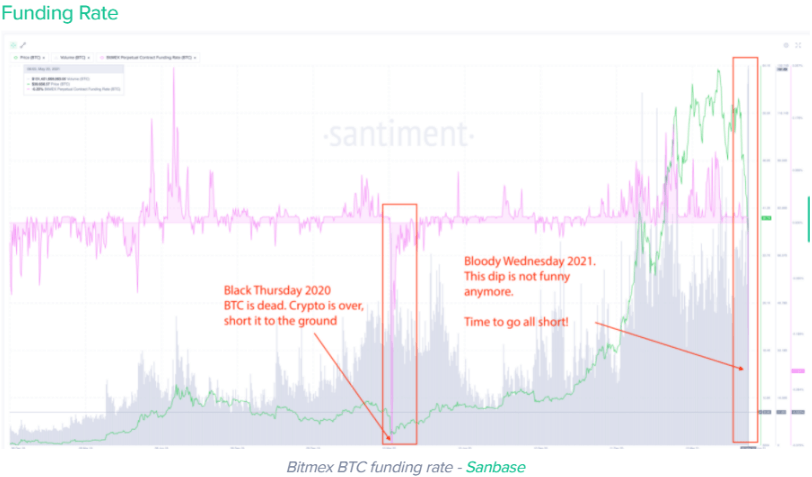 “Considering that for most part of the year, BTC's funding rate has been largely over 0%, we are now seeing overwhelming Shorters than Longers. Which is great as Shorters are now at risk instead of Longers and if there's significant move upwards, they become the buy pressure (forced liquidations upwards).”

Even after the $5.49 billion worth of long positions in liquidations, Phillip Gradwell, Chief Economist at Chainalysis Inc. continued to reason out why its unlikely the end of the bull run, which is expected to be quite insightful for potential investors. 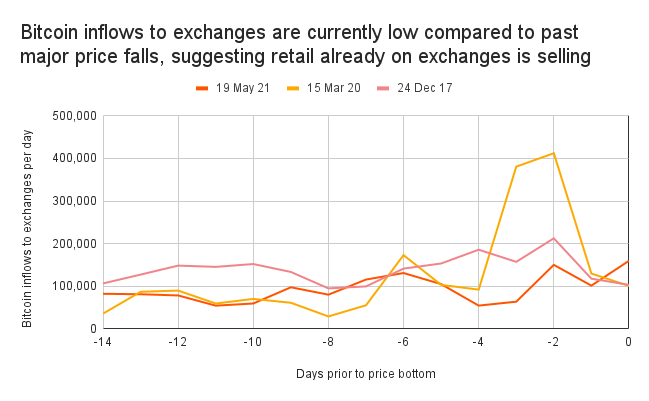 “Investor whales bought the dip, adding 34k bitcoin on Tuesday and Wednesday, 18 and 19 May, after reducing their holdings by as much as 51k bitcoin in the last two weeks. This is a stronger whale response than in March 2020.” 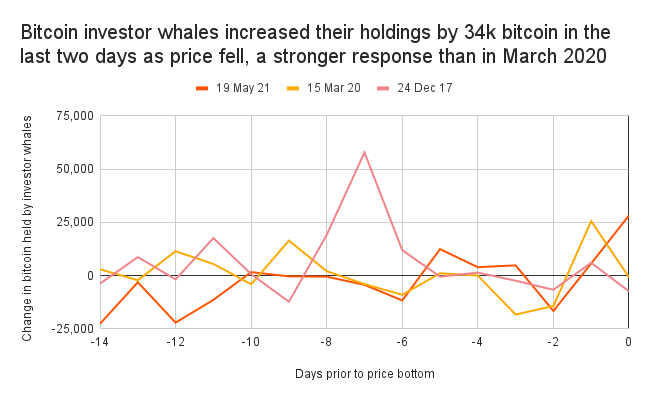 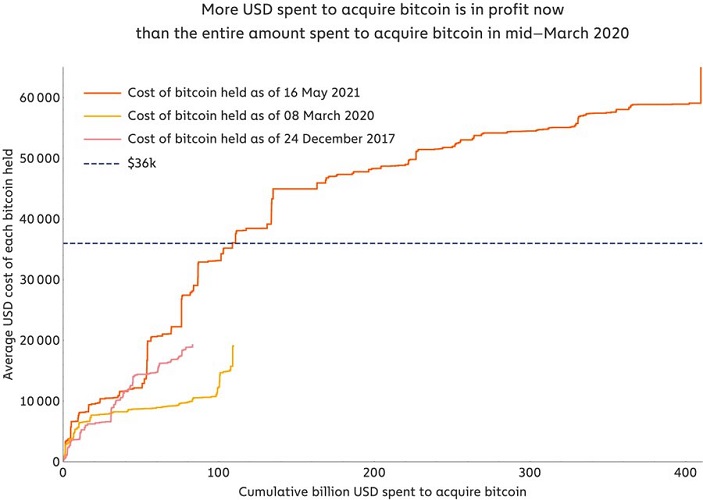 On the other side, there are analysts cautioning the investors about digital assets’ role as a transaction currency or stable store of value over the longer term and thus, contesting ‘buy the dips’ propositions across the crypto board.

“If you think bitcoin's price keeps on rising over time - much like the latest quadrupling over the past 12 months - then why would you surrender those gains by paying for anything with bitcoin today?” probes Mike Dolan, editor for finance and markets at Reuters News

Dolan added: “It's essentially just a game of hoarding a finite number of tokens by small groups of people that routinely involves wild, illiquid swings whenever regulators pounce, backers tweet support or big players cash in.”

Separately, Deutsche Bank analyst Marion Laboure argued that Bitcoin belief structures are similar to “the so-called "Tinkerbell effect" - a theory drawing from childrens' book character Peter Pan's claim that the fairy only exists because the kids believe she does.”

"In other words, the value of Bitcoin is entirely based on wishful thinking,” Laboure said.

Check Out: 3 Reasons Not To Worry About A Cryptocurrency Market Crash

Investors must pay close attention to the ongoing regulatory changes worldwide, which have significant relevance to crypto trading.

Just as China’s regulatory announcements, which triggered the meltdown, reports that US President Joe Biden could increase capital gains tax by 50% also spooked the markets. As every country moves towards developing and promoting its digital currency, traders need to remain very cautious and refrain from over-leveraged trades, which could have a cascading effect, sending markets into a tailspin.

In the latest development on this front, US President Biden proposed to catch tax dodgers extending to the cryptocurrency world, which saw the US Internal Revenue Service add a line about crypto to its individual tax return form in 2020, according to Al Jazeera.

The Treasury Department said in a report on tax-enforcement proposals released Thursday, “As with cash transactions, businesses that receive crypto assets with a fair market value of more than $10,000 would also be reported on.”

The BTC traders once again bore the brunt of this announcement, as Bitcoin stalled its recovery momentum from the $30K mark.

Likewise, traders should also closely follow the coin’s price action on the technical graphs, in order to avoid getting caught off-guard.

The biggest signal that indicated a potential sell-off was the Bitcoin price extending the previous week’s bearish momentum below the critical 200-day simple moving average (SMA), then located at $39,808.

If the BTC bulls succeed, a sharp pullback towards the bearish 21-day SMA at $51,115 cannot be ruled out, as the Relative Strength Index (RSI) reverses from oversold territory.

However, the technical picture still remains in favour of the sellers, as the RSI continues to hold below the midline while the price spots an impending bear cross.

The 50-day SMA is on the verge of cutting through the 100-day SMA from above, which once materialized would confirm a bearish crossover.

In the view of Peter Mathews, Director at TradingLounge and an Elliot Wave analysis expert, “the bounce of 30,000 is a corrective rally, it is in three waves, so further downside is expected.

Cryptocurrency
Top Brokers in
All Regulated Brokers
67% of retail clients lose money when trading CFDs with this provider.