Dash price action has been inclined to the bullish side since the drop to $225 in April. The gradual recovery allowed technical and fundamental levels to strengthen, thus lifting above $300. Moreover, a consolidation period came into the picture with the upside capped under $330. The formation of a critical technical pattern on the four-hour pattern gave way for the gains eyeing $430.

An ascending triangle pattern has been molded on the four-hour chart, as illustrated. This is a bullish continuation pattern mainly formed amid an uptrend. Two trend lines make the ascending triangle, connecting sequential peaks (relatively equal) and troughs.

The horizontal line (x-axis) portrays a weakening bearish picture, while the ascending trend line (hypotenuse) highlights the bullish strengthening bullish outlook. A breakout is expected before the trend lines meet and is characterized by a spike in volume. Note that triangles usually have exact targets measured from the highest to lowest points. 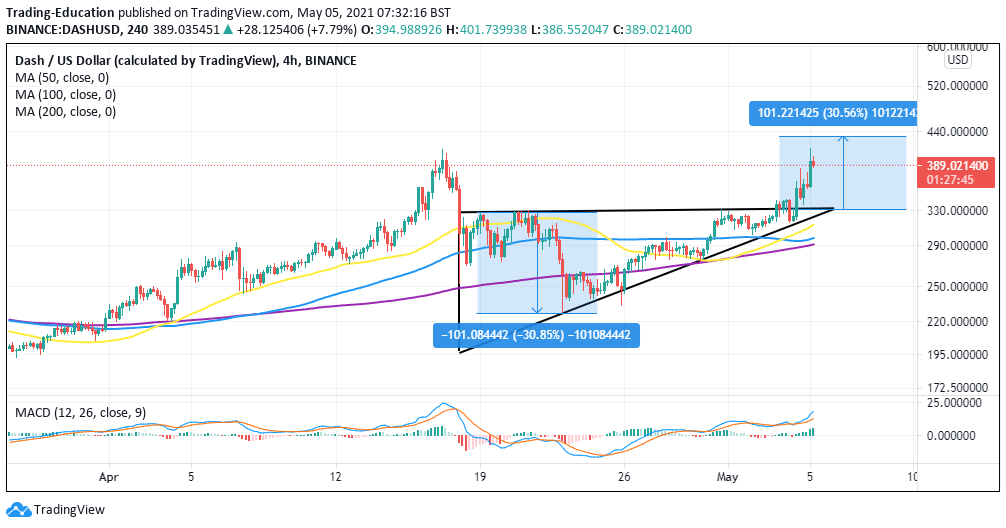 In other words, the ongoing rally has the potential to extend to $430, especially if the resistance at $400 comes down. The Moving Average Convergence Divergence (MACD) validated the bullish outlook by moving higher above the mean line.

More buyers could be called into the market if the MACD line divergence from the signal line continues to expand. Similarly, support at $380 remains crucial to sustaining market stability allowing the bulls to focus on higher price levels.

The In/Out of the Money Around Price (IOMAP) on-chain model reveals that little resistance exists to hinder the upswing to $430. In other words, Dash has a relatively smooth path to achieve another milestone and perhaps close the gap to $500.

On the downside, numerous robust support zones are in line to offer support, ensuring that Dash avoids retesting lower price levels. The area running from $345 and $358 is the most vital support. Here, 16,000 addresses previously bought around 544,000 DASH. It will be challenging to slice through this zone; hence the least resistance path is upward.

Dash
Top Brokers in
All Regulated Brokers
67% of retail clients lose money when trading CFDs with this provider.