Dogecoin recently landed support on Coinbase Pro, a leading cryptocurrency exchange platform in the United States. Investors believed that the milestone was enough to restore the glory of the meme coin as it heads toward $1.

As the news reverberated across the cryptocurrency industry, DOGE stretched the bullish leg from last week’s support at $0.28 and touched June highs of $0.45. The uptrend lost momentum at this point, paving the way for correction. At the time of writing, Dogecoin trades at $0.37 while bulls hunt for higher support.

The founder of Tesla, Elon Musk, has an unquenched thirst for Dogecoin and a hate-love relationship with Bitcoin. Musk quoted Link Park’s song “In the End,” whose lyrics were interpreted as bashing Bitcoin in his latest tweet. The tweet was accompanied by a Bitcoin hashtag and a broken heart emoji, suggesting that the billionaire is done with BTC.

On the other hand, Elon Musk boosted Dogecoin by comparing it to the United States Federal Reserve. The comparison comes in light of the infinite supply of DOGE tokens, suggesting that even the regulator in the US prints dollars indefinitely.

The meme coin has engaged reverse gears following the rejection at $0.4. All eyes are directed toward securing support at $0.35, an area hosting the 50 Simple Moving Average (SMA) on the four-hour chart.

Overhead pressure is bound to intensify, especially with the Moving Average Convergence Divergence (MACD) presenting a bearish signal. Notice the MACD line (blue) crossing beneath the signal line, which adds weight to the growing pressure. If support at $0.35 fails to hold, the 50 SMA is in line to prevent losses from extending to $0.3 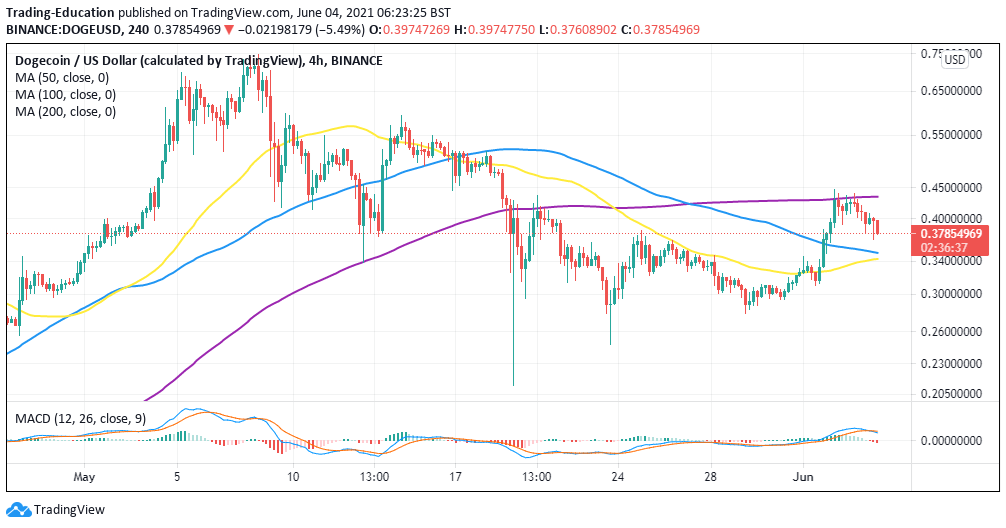 The TD Sequential indicator may flash a sell signal in the coming sessions. The call to sell will take the form of a green nine candlestick. It implies that sellers are getting aggressive than the bulls. Hence, sell orders are likely to increase and perhaps push Dogecoin toward the primary support at $0.3. 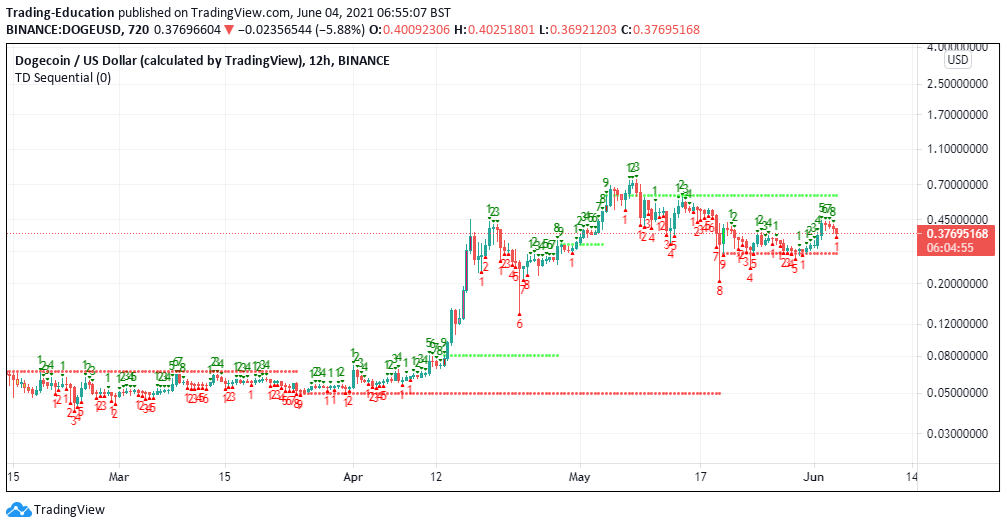 Holding above the 100 SMA could bring back stability and allow more buyers to enter the market.