Dogecoin tumbled alongside other cryptocurrencies mid this week. The losses in the market occurred while investors reacted to Elon Musk and his company Tesla rejecting BTC payments because of high energy consumption during mining and transaction processing. Note that Bitcoin mining currently uses fossil fuels, one of the world’s leading environmental polluters.

Dogecoin extended the bearish leg started at the beginning of the week from highs around $0.75 to $0.35. Support at this zone prevented losses from advancing any further. Moreover, buyers had an opportunity to focus on recovery.

The leading cryptocurrency exchange in the US, Coinbase, has announced that it will soon add support for trading the fourth-largest crypto asset by market capitalization. This news has revived Digecoin’s price action upward.

According to data by CoinGecko, DOGE is up nearly 20% over the last 24 hours to trade at $0.52. In the previous week, Dogecoin lost around 10% of its value, mainly due to the market instability caused by Bitcoin. However, in 30 days, Dogecoin accrued approximately 460% in gains.

It is essential to realize that the listing is not immediate but will take place in the next four to six weeks. The decision by the exchange to list DOGE is perhaps driven by the need to compete with Robinhood. This mobile application proclaims itself as “the easy-to-use” platform for buying cryptocurrencies and stocks.

Robinhood has in the last few months gained popularity among retail investors looking for exposure to the meme coin that has left everyone in shock with its incredible rally to the fourth spot in the market.

How far will the ‘Coinbase effect’ take Dogecoin?

Over the years, the tokens listed on Coinbase have posted incredible growth. The phenomenon has come to be referred to as the Coinbase effect. Some crypto assets rally immediately after the announcement and continue to the actual listing.

Meanwhile, DOGE is already up 20% four or six weeks before the actual listing. The rally may continue as the listing approaches. However, the four-hour chart shows that the 50 Simple Moving Average (SMA) currently hinders the rapid price movement. Closing the day above this zone and, by extension, the hurdle at $0.55 would open Dogecoin for more gains during the weekend session. 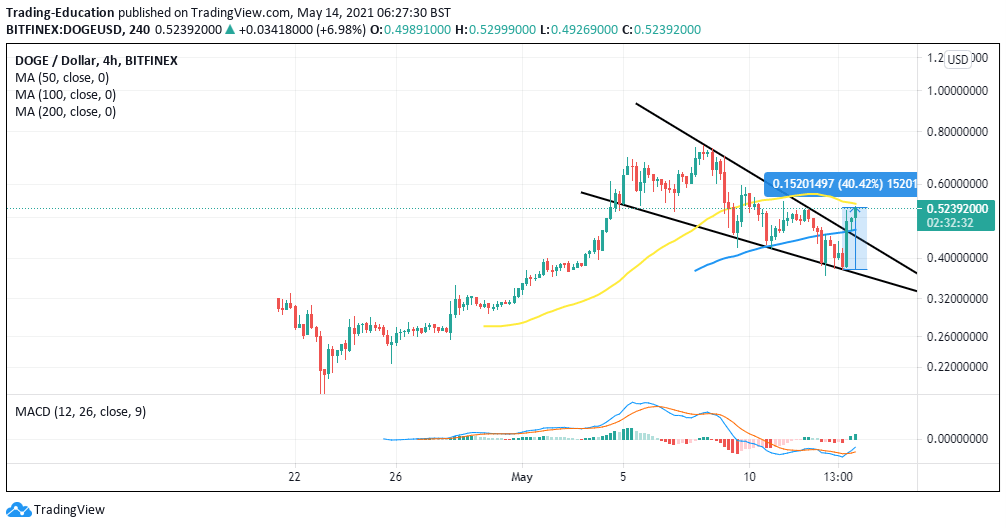 The Moving Average Convergence Divergence (MACD) hints at the uptrend gaining traction in the coming sessions. Therefore, the least resistance path is upward. The same four-hour chart highlights the formation of a falling wedge, a highly bullish technical pattern.