Dogecoin is set to start trading on Coinbase Pro on June 3. According to the latest announcement from the United States leading exchange, traders started sending deposits On Monday. The support will apply to all Coinbase supported jurisdictions. Note that trading will "begin on or after 9 AM Pacific Time (PT) Thursday, June 3, if liquidity conditions are met."

Dogecoin extended the bullish action above $0.3 following the report that Coinbase Pro will expose it to more users. The meme coin trading a new June high of $0.38 but appears to have stalled under the 100 Simple Moving Average (SMA).

At the time of writing, Dogecoin trades at $0.36 following a minor retreat. The primary goal in the bullish camp is to rise above the 100 SMA hurdle, a move that may clear the path to $0.4.

It is essential to realize the formation of a falling wedge on the four-hour chart. This pattern is highly bullish and signals the beginning of bullish momentum. As the asset loses ground, the price bounces between two downward-slanting trend lines. It is interpreted as both a bullish continuation and a bullish reversal chart pattern.

Traders employ the falling wedge to identify a reversal in the market, especially after an extended downtrend. As the price nears the wedge's apex, a sideways trading action occurs, implying that a breakout is around the corner.

A break and a close above the resistance trendline will signal a position of entry. A stop-loss can be placed at the previous swing low while the target on the upside is the distance between the widest points of the wedge. 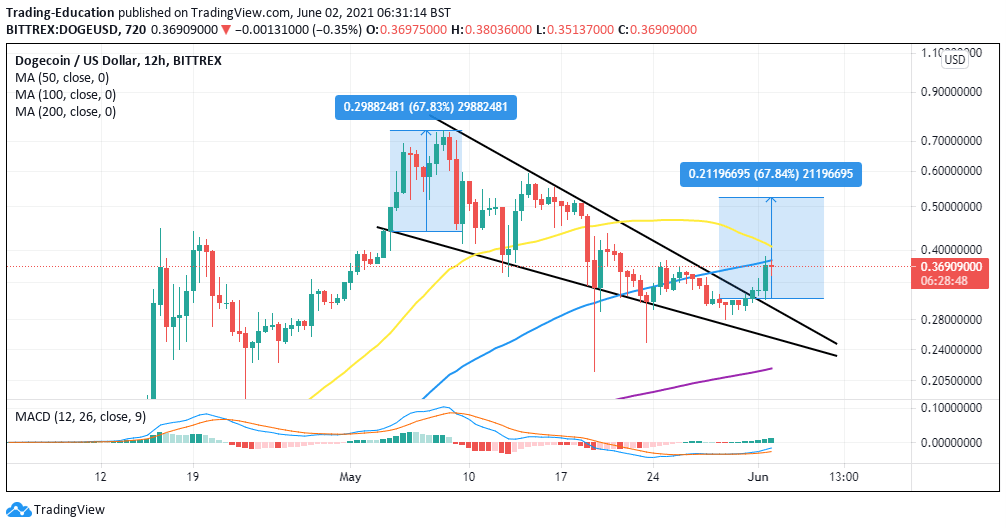 Dogecoin has already confirmed the breakout above the descending wedge but must overcome the hurdles at the 100 SMA and the 50 SMA to complete the trajectory eyeing $0.52. As the trading commences on Coinbase Pro, increased buy orders would significantly bolster the meme coin.