Dogecoin blasted to new all-time highs after rebounding from April’s dip to $0.14. For a while, DOGE consolidated below $0.35, whereby the bulls’ efforts to regain the ground went unrewarded. An organized ‘Doge day’ also failed to bolster the price upward.

However, the relentless bulls took advantage of Elon Musk’s hype to increase their positions, in turn pulling the price to highs above $0.4. Trading above the previous all-time high at $0.44 triggered massive buy orders, which had a ripple effect on the tailwind.

Dogecoin Manoeuvres its Way Toward $1

At the time of writing, Dogecoin trades within a whisker of $0.7 after breaking multiple barriers in the $1 bound journey. All the short-term technical levels reveal that the slightest resistance path is upward. Some even argue that Dogecoin is trading in euphoria and that little attention should be given to the technical outlook.

The Relative Strength Index (RSI) shows that bulls are firmly in control despite the overbought conditions. However, higher support levels must continue to be established to ensure that Dogecoin’s uptrend is sustainable. 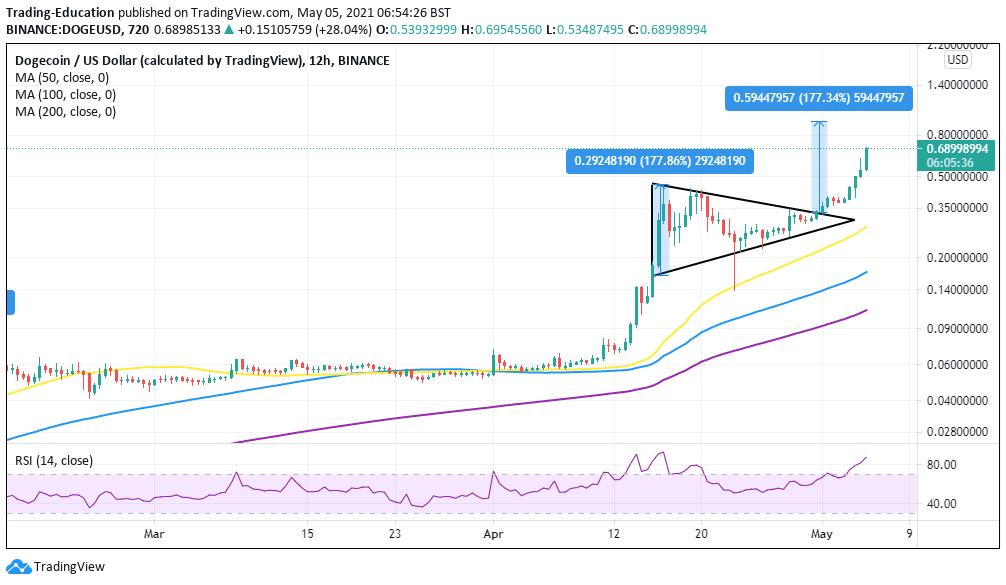 The same 12-hour chart illustrates the formation of a symmetrical triangle pattern. The chart pattern is created by converging two trend lines, linking sequential peaks and troughs. Generally, the lines are supposed to cross at an approximately equal slope. This formation brings to light a period of consolidation ahead of either a breakout or a breakdown.

Usually, breakdown occurs from the ascending trendline and identifies the beginning of a downtrend. On the other hand, a breakout happens at the descending trendline and signifies the start of a bullish trend, resembling Dogecoin’s ongoing price action. Symmetrical patterns have exact breakout targets measured from the highest to lowest points. For instance, DOGE’s breakout from the triangle eyes a 177% liftoff to $0.94.

It is worth mentioning that traders have to keep in mind that Dogecoin is already overbought. Therefore, a correction in the near term is not a far fetched idea; hence it calls for caution.