Dogecoin has been in a downtrend since the weekend session when a new record high was achieved at $0.75. The mission of seeking higher support has encountered numerous roadblocks, with some investors moving to the self-proclaimed “Dogecoin killer” Shiba Inu (SHIB).

The selloff in the cryptocurrency market on Wednesday added gasoline to the fire, with Dogecoin extending the bearish leg to the support provided by the 200 Simple Moving Average (SMA) at $0.35 on the four-hour chart.

The world’s largest manufacturer of electric vehicles, Tesla has suspended the purchase of its vehicles using Bitcoin. Elon Musk, the founder and CEO of the company, said via Twitter that Bitcoin mining and transaction processing were contributing immensely to environmental degradation.

According to the company, mining is turning more to fossil fuels and coal, leading to pollution. Tesla has decided to keep its Bitcoin holdings for future use when mining turns to sustainable energy.

Before Musk dropped the bombshell on Bitcoin, he had run a poll on Twitter, where he asked people if Tesla should accept Dogecoin as a form of payment. Many of his followers agreed that DOGE should be accepted, while a small percentage objected to the idea.

Therefore, with Bitcoin out of the way, crypto-assets such as Dogecoin are likely to be considered. Musk already has an unquenched thirst for DOGE, making it a possible replacement for Bitcoin payments. Note that Tesla said that it would be looking at cryptocurrencies that consume at least 1% of Bitcoin energy requirements.

Dogecoin trades at $0.44 at the time of writing. Recovery from $0.35 has been gradual but consistent, perhaps due to the buyer congestion at the 200 SMA. The 100 SMA limits movement on the immediate upside; therefore, bulls must work harder to lift above the hurdle.

A falling wedge pattern on the four-hour chart shines a light on a potential upswing to $0.64. This is a reversal pattern that forms in a downtrend. It implies that buyers are ready to take control amid a weakening bearish camp. A break above the upper trend line will be characterized by increased trading volume, bolstering the meme coin higher. 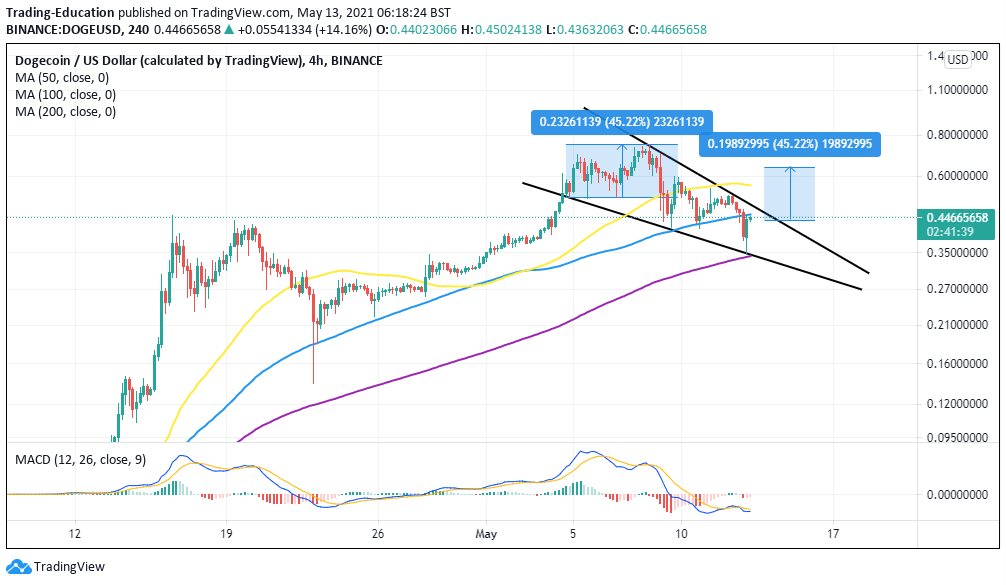 It is worth mentioning that Dogecoin is not out of the woods. Resistance at the 100 SMA is still apparent may lead to a surge in overhead pressure. Besides, the Moving Average Convergence Divergence (MACD) has a bearish impulse, adding credence to the potential correction.