Dogecoin has rallied from its recent pivotal levels around $0.3. Support at $0.28 ensured that last week’s declines did not extend to $0.24. Meanwhile, the listing on Coinbase Pro revived investor sentiment, marking the start of the ongoing uptrend.

The “Daily Active Addresses” on-chain metric by IntoTheBlock shows that various parameters have started to improve in light of the gains from the crash to $0.22 in May. The number of active addresses interacting on the network soared from a 30-day low of roughly 55,000 to nearly 82,000 at the time of writing.

Note that an increase reveals speculation for higher gains is growing in the community and, therefore, the potential for a breakout is greater.

Consequently, a similar growth pattern is observed with the number of new addresses joining the protocol. After a 30-day bottoming of around 21,500, the addresses being created on the network each day have risen to 36,000. According to IntoTheBlock, as the metric increases, the adoption of the cryptocurrency progresses. Moreover, the regular inflow and outflow of tokens on the protocol are restored, allowing bulls to sustain the accrued gains.

Dogecoin is trading at $0.42 after bulls took down several barriers, starting with the 100 Simple Moving Average (SMA), the 50 SMA, and $0.4 on the 12-hour chart. Establishing higher support is among the bulls’ priorities.

The Moving Average Convergence Divergence (MACD) indicator has a bullish impulse, insinuating that the uptrend is intact. If the momentum indicator makes its way into the positive region, more buyers will be encouraged to join the market. On the other hand, the MACD line recently crossed above the signal line, presenting a formidable buy signal. 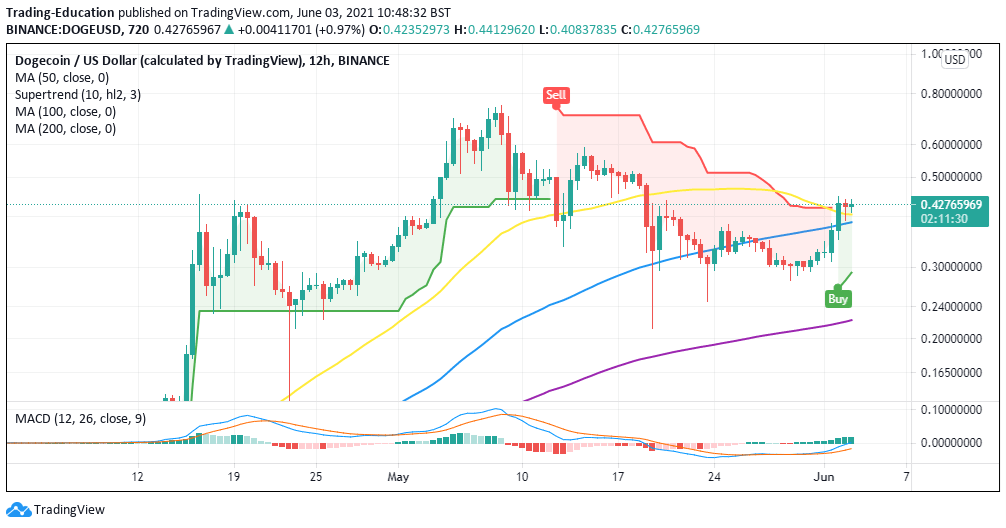 The same chart brings to light a second buy signal from the SuperTrend indicator. This is a technical chart overlay that follows the trend of an asset while tracking the volatility. Traders use the SuperTrend to identify positions to either short or long assets.

When the overlay line changes to green from red and flips under the price, it calls for buy orders. On the other hand, changing from green to red and moving above the price is a call to sell. For now, the buy signal is in line with different technical and on-chain levels to support Dogecoin’s quest for gains past $0.6.