Dogecoin recently liquidated investors and traders after rallying to highs slightly above $0.7 and dropping to $0.41. Before the Elon Musk appearance on the Saturday Night Live show, the upswing occurred, but a correction came into the picture, thwarting the chances of lifting to $1.

The meme coin retreated to $0.41 by Monday amid the widespread losses in the cryptocurrency market. Support at this level opened the door for more investors to buy in at a lower price, thus making the foundation for the ongoing recovery.

The buyer congestion at $0.41, as highlighted by the 50 Simple Moving Average (SMA) on the 4-hour chart, allowed bulls to change the focus upward. According to data by CoinGecko, DOGE is up over 12% in the last hour to trade at $0.51.

The 50 SMA limits the immediate upside, implying that if the hurdle is pushed into the rearview, Dogecoin will extend the bullish leg toward $0.7. Similarly, the narrative is supported by various technical indicators such as the Moving Average Convergence Divergence (MACD).

Note that the MACD tracks the asset’s trend and measures its momentum. This technical indicator is useful when identifying positions to sell the top and buy the bottom. Usually, investors are implored to buy when the MACD crosses the midline into the positive area. Moreover, the bullish outlook is reinforced by the MACD line striking above the signal line.

As for Dogecoin, the MACD has started recovering, implying a buy signal. The Relative Strength Index (RSI) hints at the bullish outlook lasting longer. As discussed, the uptrend to $0.7 will be secured by closing the day beyond the 50 SMA. 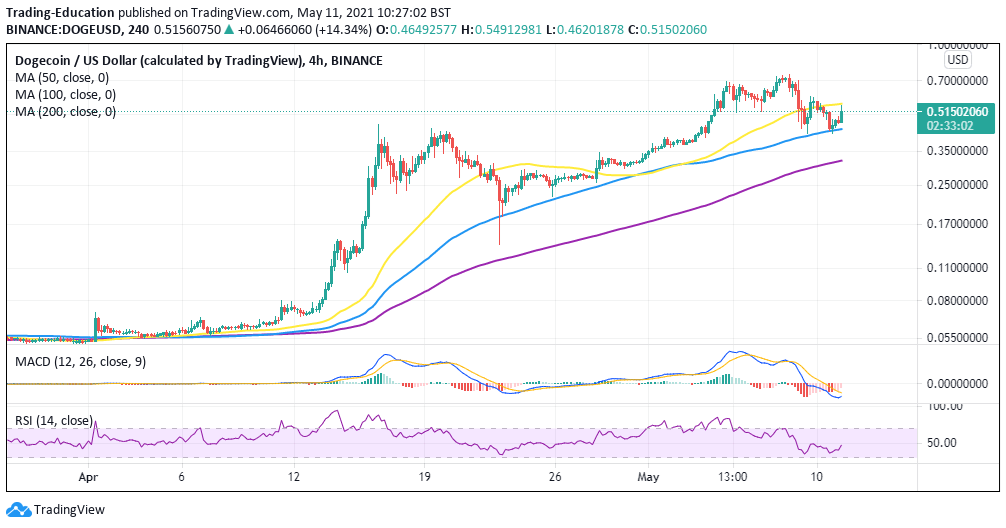 Overhead pressure may start to build if Dogecoin fails to close the day above the 50 SMA. On the other hand, the IOMAP on-chain model by IntoTheBlock reveals that resistance levels gradually increase in intensity, suggesting that recovery will be a challenging task.

Dogecoin
Dogecoin Forecast
Top Brokers in
All Regulated Brokers
67% of retail clients lose money when trading CFDs with this provider.