Dogecoin is back to bleeding following a great and consistent upward price action that almost brushed shoulders with $0.3. A descending trend line dampened the bullish momentum, allowing bears to retake control.

Meanwhile, a correction has pulled DOGE to $0.22 and seems poised to stretch further down. A daily close under $0.22 will likely trigger losses. The target on the downside is $0.2, and the supply zone marked green on the daily chart.

The meme-based coin had earlier in the week depicted signs of a potential breakout to $0.35. However, the failure by the bulls to rise above $0.3 suddenly changed the technical picture. For now, the slightest resistance path is downward.

Dogecoin’s immediate upside is laced with robust obstacles, including the seller congestions at the 100-day Simple Moving Average (SMA), the 50-day SMA, and the descending trend line, not to mention the 200-day SMA.

Attempts to break reach for higher levels without a strong tail force might result in losses to the primary support, highlighted between $0.2 and $0.19. 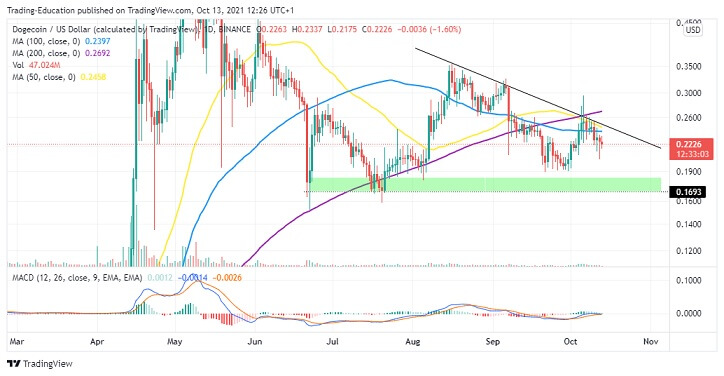 Simultaneously, the Moving Average Convergence Divergence (MACD) indicator teases a sell signal in the same daily timeframe. The odds for a downtrend will soar as the 12-day EMA crosses below the 26-day EMA. In addition, bears will gain more ground as the MACD explores the area beneath the mean line.

The IOMAP model by IntoTheBlock (ITB) cements the bears’ influence over the price by revealing the massive resistance zone between $0.25 and $0.257. In this range, nearly 49,200 addresses previously bought approximately 5.25 billion. Trading above this zone will not be a massive challenge to the bulls, especially with other equally strong resistances preceding it.

On the flip side, Dogecoin sits on relatively weak support areas, adding credibility to the bearish notion. However, the model brings our attention to subtle buyer congestion between $0.202 and $0.209. Here, roughly 44,000 addresses are currently profiting from the approximately 1.84 billion DOGE bought in the zone.

This support area is not strong enough to keep Dogecoin from dropping further, thus the risk of exploring levels under $0.2.