Dogecoin Price Analysis: DOGE Wriggling at the Edge of a High Cliff

Dogecoin failed to break out of the symmetrical triangle discussed on Thursday. Instead, bulls bowed to the bearish pressure at the 50 Simple Moving Average (SMA) on the four-hour chart. Support at $0.3 must hold if DOGE prevents the lingering declines to $0.28 and $0.24.

Dogecoin embarks on a gains-trimming exercise

The last few days have seen Dogecoin consolidate while pivoting $0.34. The upside has been capped under the 50 SMA as mentioned above. On the downside, immediate support heralds from the buyer congestion at $0.3.

Dogecoin trades at $0.31 after joining the rest of the market in the losses posted during the Asian session on Friday. As the European session builds momentum, bears seem to have purposed to hit lower targets before the weekend session. 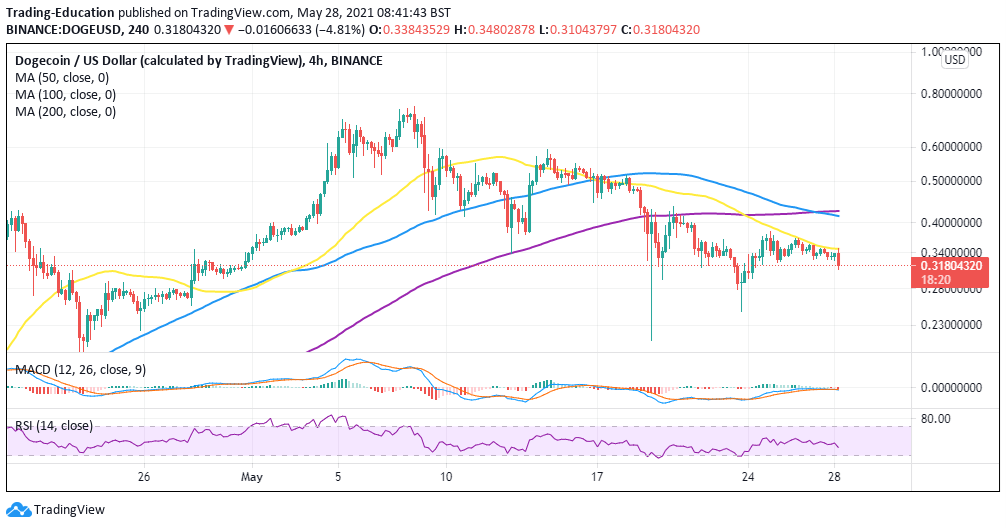 The support at $0.3 remains crucial to the bulls, especially with the Simple Moving Average (RSI) sending a bearish signal. Another sell signal appeared after the Moving Average Convergence Divergence (MACD) failed to rise into the positive region.

It is worth mentioning that a MACD line (blue) crossing beneath the signal line will increase overhead pressure. Moreover, sell orders will be triggered if Dogecoin closes the day below $0.3. On the downside, support is anticipated at $0.28 and $0.24, respectively.

IntoTheBlock’s “Daily Active Addresses” metric shows a consistent decline in the number of new addresses joining the Dogecoin network. Note that the drop is in tandem with the slump in price. Thus, if the metric fails to recovery from the prevailing average of 25,500 unique addresses per day, the gravitational force pulling Dogecoin down will carry on.

If we consider the probability of $0.3 not giving way to declines, buying pressure will increase. A trend reversal past $0.34, and by extension, the 50 SMA hurdle would call more investors from the sidelines, as speculation builds for gains to levels above $0.4.