Dogecoin continues to bleed after falling victim to the seller's congestion at $0.45. The meme coin had rallied from $0.3 due to the listing on Coinbase Pro. Despite the exposure to new users, the general downtrend in the cryptocurrency market denied DOGE the ability to hold the gains.

Dogecoin dived under crucial levels at $0.37 and $0.33, with the bearish leg stretching to $0.3. At the time of writing, DOGE trades at $0.33 while bulls battle to ensure stability in the market. With the immediate upside capped under $0.33, the meme coin may drop further.

Dogecoin formed a double-bottom pattern on the 4-hour chart after failing to break the resistance at $0.45 and retracted to $0.3. Realize that this is a highly bullish technical reversal pattern that comes into the picture after an asset hits a lower price point a couple of times. The lows are separated by a price peak, in this case, $0.45.

The double-bottom pattern is confirmed in technical analysis when the asset tries and fails to break the support for the second time. A support level such as this is characterized by a high concentration of buyers who take advantage of the lower price to push the coin higher. It is essential to wait for an established breakout to validate the upswing and avoid false double-bottom patterns. 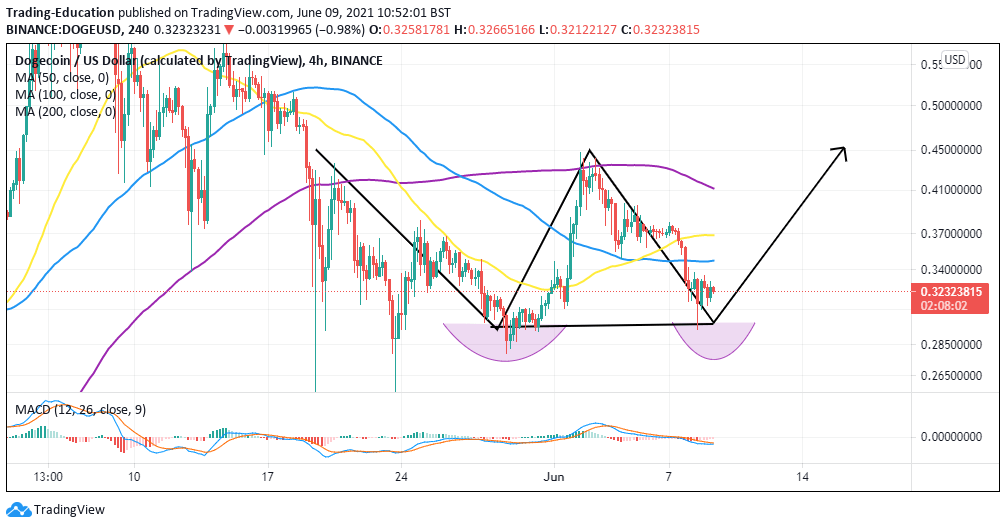 IntoTheBlock's IOMAP model groups addresses previously involved in transactions on the Dogecoin network. The number of coins purchased alongside the addresses forms support and resistance ranges, thus giving an insight into the possible direction of the trend.

According to the model, the zone running from $0.29 and $0.3 hosts 58,000 addresses currently profiting from the 5.4 billion DOGE previously purchased. This is the most robust buyer congestion zone and sellers will have a challenge breaking through this area. Hence, the path with the slighted resistance is upward.

The same model shines a light on a weakening bearish front based on the hurdle running from $0.34 and $0.35. Here, nearly 44,600 addresses previously bundled up 3.66 billion DOGE. As long as bulls focus on gains above $0.4, Dogecoin will eventually slice through this zone, validating the technical breakout to $0.45.

The prediction to $0.45 depends on the bulls' ability to build on the support at $0.3. However, if the price slices through the crucial support between $0.29 and $0.3, massive sell orders may come into the picture and force Dogecoin down the rabbit hole to $0.2.