Support at $0.5 may invalidate the downtrend, allowing bulls to come in for gains above $0.3.

Dogecoin opened Pandora’s box after closing the day under $0.3 last Friday. The losses spilled into the weekend session affecting the entire cryptocurrency market. Tentative support at $0.28 failed to halt the gravitational pull on DOGE, extending the bearish leg to $0.25.

Meanwhile, Dogecoin trades at $0.26 at the time of writing amid the vivid bearish outlook. If support at $0.25 is shattered, investors can expect another dip heading to $0.2.

The Moving Average Convergence Divergence (MACD) indicator has a bearish signal that is still vivid, notwithstanding the retreat from $0.3. For instance, the MACD line (blue) recently crossed under the signal line, as shown on the four-hour chart. In addition, the divergence between the two parameters has been sustained, suggesting the downtrend may continue in the short term. 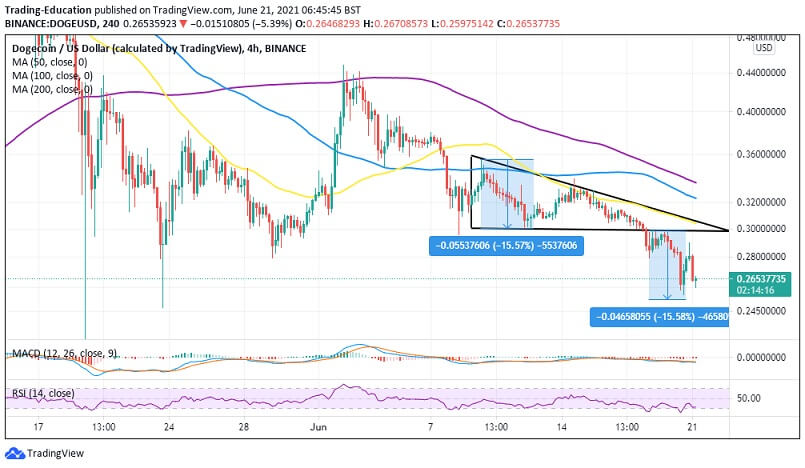 As reported on Friday, a descending triangle formation on the four-hour chart predicted a drop to $0.24. Dogecoin dived to $0.25 during the weekend session, almost hitting the target. Realize that descending triangles are highly bearish and often lead to trend continuations. Therefore, if support at $0.25 fails to hold, the losses may carry on toward $0.2.

The In/Out of the Money Around Price (IOMAP) on-chain model by IntoTheBlock reveals immense resistance heading to $0.3. If bulls are not ready for a ferocious battle, recovery will not be fast as investors may hope.

Support levels are scarce, as conferred by the model, adding credence to the bearish outlook. The area running from $0.226 and $0.234 is the most substantial buyer congestion zone. Here, around 1,900 addresses are reported to have purchased roughly 238 million DOGE.

Closing the day above $0.25 would be a bullish signal and perhaps renew the stability in Dogecoin’s market. Despite the resistance highlighted by the IOMAP model, bulls can gradually build the uptrend toward $0.3.