Dogecoin bulls struggle with keeping the price afloat at $0.3. The mundane price action is not unique to DOGE but has affected the majority of cryptocurrencies. Dogecoin teeters at $0.303 amid a potentially massive drop to $0.24.

The meme coin is trading at the apex of a descending triangle on the four-hour chart. The price tends to move into a tighter range, shining a light on a more harrowing battle between the bulls and the bears.

The descending triangle is regarded as a continuation pattern in technical analysis. Traders confirm the formation of a triangle following at least touches of the support (x-axis) and resistance (hypotenuse).

The descending trendline shows a bearish building momentum while the x-axis highlights support that sellers cannot seem to break. Often the price eventually slides below this support and keeps falling. Note that there are instances when this anchor is too strong; hence the price rebounds, invalidating the descending triangle.

Similarly, Dogecoin appears to be testing the x-axis support again. Again, if the price closes the day below this level, massive declines will follow. As illustrated, triangles have exact breakout targets equal to the distance between the highest to the lowest points. 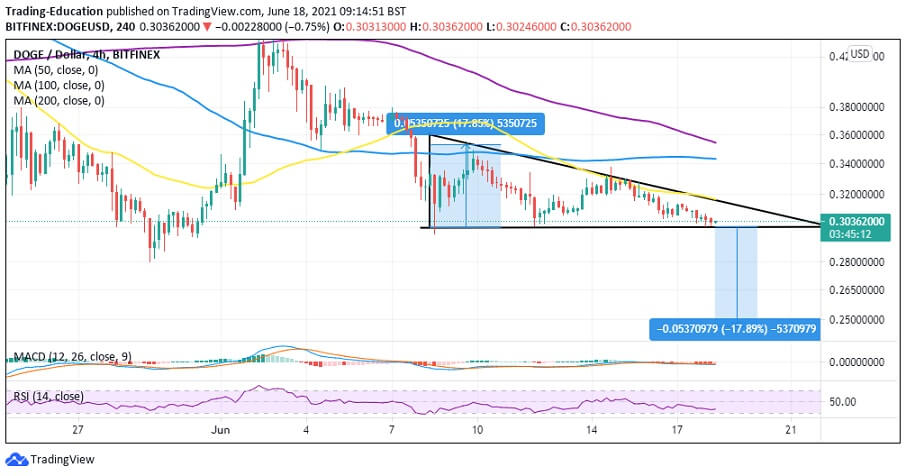 The bearish narrative has been reinforced by the Moving Average Convergence Divergence (MACD) indicator. As this technical tool follows the asset's trend, it measures its momentum. Usually, crossing below the zero line is a bearish signal, emphasized by the MACD line (blue) moving under the signal line.

In addition to that, Dogecoin's upside is limited by the seller's congestion at $0.32. The 50 SMA will also absorb the buying pressure, curtailing the bulls' efforts. Moreover, the descending trendline of the triangle pattern may also delay the recovery and perhaps lead to another dip to $0.3 or another lower level.

IntoTheBlock's IOMAP model reinforces the technical barriers mentioned. Hence, recovery will be a challenge in the coming days. The model directs our attention to the most visible hurdle running from $0.318 to $0.328. Here, roughly 130,800 addresses previously bought 8.22 billion DOGE in the range. As the price rises, its momentum may be weakened in this area, further delaying recovery.

On the flip side, Dogecoin is not strongly supported. The only medium support lies between $0.29 and $0.3. Only 54,700 addresses previously scooped up 2.64 billion DOGE in this range. Other support areas are weak and may not help keep Dogecoin afloat in the near term. Thus, adding credence to the downtrend target at $0.24.

Holding support at $0.3 may invalidate the downswing. However, with Dogecoin assuming market stability, the consolidation may culminate in a massive upswing toward $0.4.