Dogecoin flew the bullish flag above the horizon on Wednesday as it responded to Elon Musk's tweet. The founder of Tesla, the largest electric vehicle manufacturer, said that he would be the official "Dogefather" as the host of the Saturday Night Live show. Social media went ablaze as usual, with DOGE lifting to $0.35.

Dogecoin stalls but uptrend is intact

The meme coin trades at $0.31 after correction from the resistance at $0.35. Bulls seem to be working around the clock to hold the support at $0.3. If the buyer congestion zone is secured, Dogecoin will likely resume the uptrend.

A symmetrical triangle pattern has formed on the four-hour chart, hence the possibility of a colossal liftoff. This pattern signifies consolidation and is created using two trend lines – connecting declining peaks and ascending troughs.

The trend lines meet at a relatively equal point, but a breakout is expected before that. Symmetrical triangles have exact breakout targets measured from the highest to the lowest points, as illustrated. It is essential to keep in mind that the patterns can lead to breakouts or breakdowns.

A breakout occurs when the price cracks the upper trendline resistance, which marks the commencement of the uptrend. For example, Dogecoin may rally 177% to exchange hands at $0.93. On the flip side, a breakdown comes into the picture when the price strikes beneath the lower trend line. 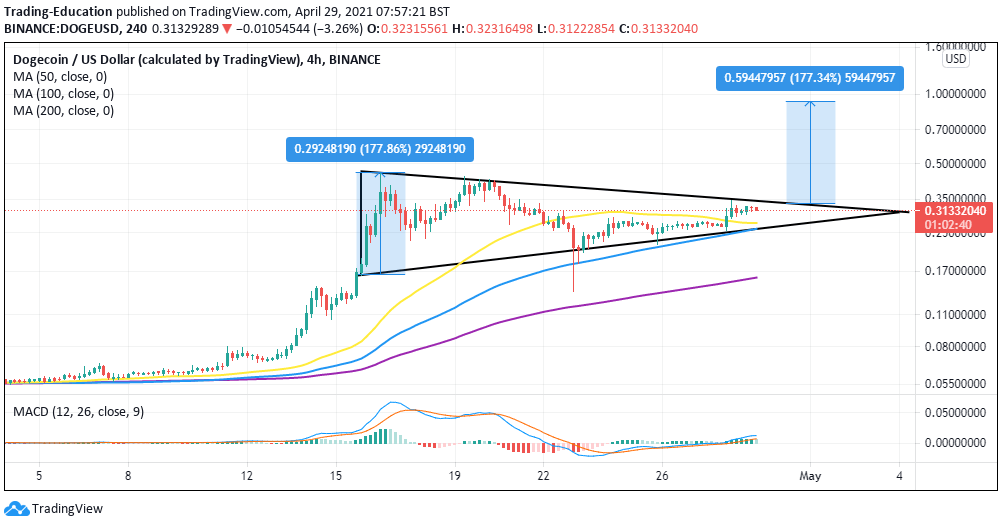 Dogecoin's potential uplift has been validated by the Moving Average Convergence Divergence (MACD) indicator on the four-hour chart. The indicator flipped massively bullish amid the entrance into the positive region. Despite the correction from $0.35, the MACD line (blue) still sustains the position above the signal line.

On the other hand, if support at $0.3 fails to hold, declines may increase the intensity, thereby jeopardizing other anchor areas such as the 50 Simple Moving Average (SMA). The symmetrical triangle can also result in a downswing, as discussed above. The 100SMA would be the last resort before Dogecoin explores levels toward $0.15.