Dogecoin has once again been caught in a brawl between the crypto market bulls and bears that have mainly affected Bitcoin and Ethereum. The flagship cryptocurrency dived under $40,000, extending the weekly losses while Ethereum explored levels under $3,000.

On the other hand, DOGE’s down leg expanded the gap below $0.5, where price levels beneath $0.4 were revisited. Despite the freefall, the meme coin is holding within the upper column of the descending parallel channel. Besides, holding onto the middle boundary’s support could secure market stability, allowing bulls to focus on gains back to $0.5.

Dogecoin could soon resume the uptrend

However, if lost, DOGE still has a last resort at the descending channel’s middle boundary support. The buyer congestion at $0.4 emphasizes this. On the upside, a daily close above these two levels could bolster the price toward $0.5. Some delays should be expected at this point due to the confluence resistance from the 50 SMA, the 100 SMA and the channel’s upper edge. 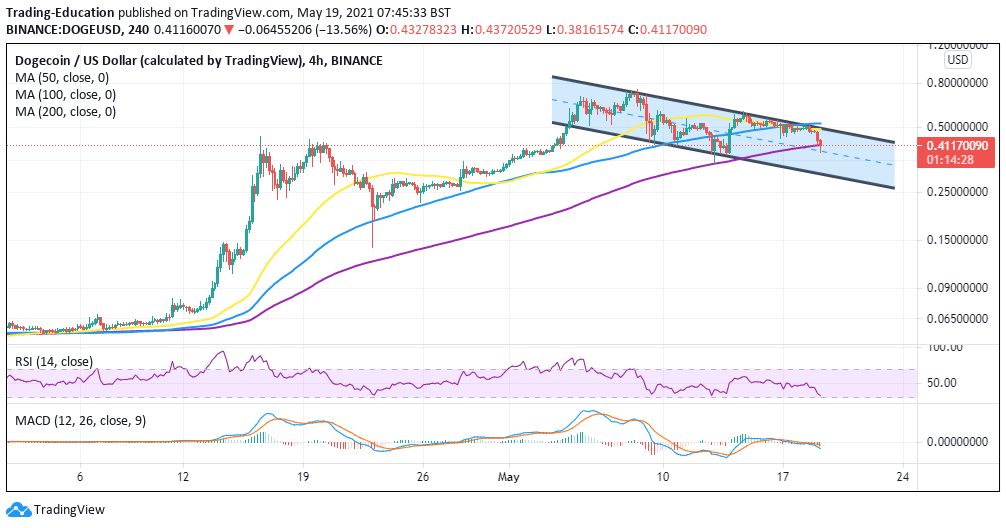 According to IntoTheBlock’s In/Out of the Money Around Price (IOMAP) on-chain model, Dogecoin is likely to settle in a broad range consolidation before another significant price action comes into play.

The IOMAP highlights the range between $0.44 and $0.445 as the most robust resistance. Here, roughly 34,000 addresses previously purchased 1.12 billion DOGE. This upper range limit will be a challenge to break; thus, traders should anticipate hindrances to recovery missions.

On the flip side, the substantial buyer congestion zone runs from $0.38 to $0.39. Here, nearly 16,000 addresses previously bought 997 million DOGE. If this support area remains intact, losses to $0.35 and $0.25 will be averted. Moreover, the price will assume consolidation before recovery ensues.