Dogecoin rallied to $0.45 last week but failed to move to $0. The anticipated bullish action to $1 on 'Dogeday' was also thwarted, as investors prepared to pump the meme coin to significant levels.

Dogecoin has had tremendous success achieved in the last few weeks. However, it responded with a massive correction on 'Dogeday.' At the time of writing, Dogecoin trades at $0.28 amidst the ongoing downtrend. Overhead pressure appears to be increasing; thus, DOGE risks dropping further.

The prevailing technical picture is massively bearish, as confirmed by the Moving Average Convergence Divergence (MACD) indicator. This key indicator follows the direction of an asset's trend and measures its momentum. It is vital to note that MACD does not signify overbought or oversold conditions.

On the other hand, traders use the MACD to identify positions to buy the dip and sell the top. The MACD line (blue) crossing under the signal line insinuates to traders to sell Dogecoin or reduce their positions. Moreover, the bearish grip will become stronger as the indicator drops toward the mean line (0.000). 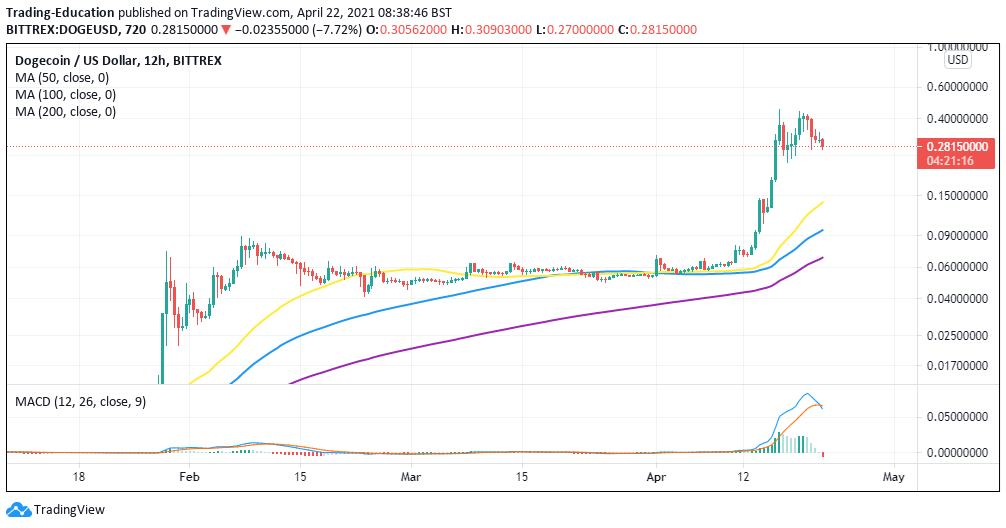 Support at $0.25 is crucial to ensure market stability. Therefore, if lost, massive sell orders will trigger intense pressure toward $0.15.

The In/Out of the Money Around Price (IOMAP) reveals that Dogecoin faces immense resistance, likely to delay recovery. The region between $0.31 and $0.32 is the most robust and holds nearly 123,300 addresses which previously bought around 17 billion DOGE.  Slicing through this zone would be an uphill battle for the bulls.

On the downside, Dogecoin sits on weak support levels that do not seem strong enough to halt the overall declines. For example, the model highlights the region between $0.26 and $0.27 as the most meaningful support area. However, only 1,000 addresses previously scooped up approximately 841 million DOGE. It is apparent that declines may continue in the short term.

Simultaneously, it is worth mentioning that Dogecoin has the potential to secure support at $0.25. If this buyer congestion holds at this level, stability in the market will assure investors to return. On the upside, gains above $0.3 are likely to trigger massive buy orders as traders increase their positions, anticipating liftoff approaching $0.45.

Dogecoin
Dogecoin Forecast
Top Brokers in
All Regulated Brokers
67% of retail clients lose money when trading CFDs with this provider.