Dogecoin closed the trading on Wednesday under $0.2, a move believed to have the potential to trigger more declines toward $0.16 (May’s support). The meme coin trades at $0.192 when writing amid a brutal tug of war between the bulls and the bears.

For Dogecoin to resume recovery, bulls must pull up their socks and step above $0.2. Otherwise, the “gravitational pull” will continue to intensify, especially with technical levels remaining drab.

Jackson Palmer, the co-founder of Dogecoin, aired his views on the entire cryptocurrency industry on Wednesday via a Twitter thread. In his opinion, “cryptocurrency is an inherently right-wing, hyper-capitalistic technology” used by its proponents to multiply their wealth through question ways like tax avoidance and artificially enforced scarcity.

“I believe that cryptocurrency is an inherently right-wing, hyper-capitalistic technology built primarily to amplify the wealth of its proponents through a combination of tax avoidance, diminished regulatory oversight, and artificially enforced scarcity.”

Palmer carried on saying that the industry is a playfield of a “powerful cartel of wealthy figures.” These wealthy individuals have grown into “the same institutions tied to the existing centralized financial system they supposedly set out to replace.”

In other words, Palmer clarified that he is never coming back to the world of cryptocurrency using a Twitter thread to “avoid repeating” himself.

Dogecoin Price Downtrend Far From Over

DOGE is trading within a descending parallel channel, as seen on the 12-hour chart. The middle boundary is a challenge to crack and has lately been sending bulls out of balance. Support at $0.19 is crucial for the resumption of the uptrend. However, if lost, pressure will be transfer to the lower edge of the channel.

It is worth noting that Dogecoin crashed to $0.16 in June, but a significant recovery took place to $0.29. With the downtrend gaining momentum, DOGE seems ready to revisit the primary support, where more investors will take advantage of the low prices speculate another upswing to $0.3. 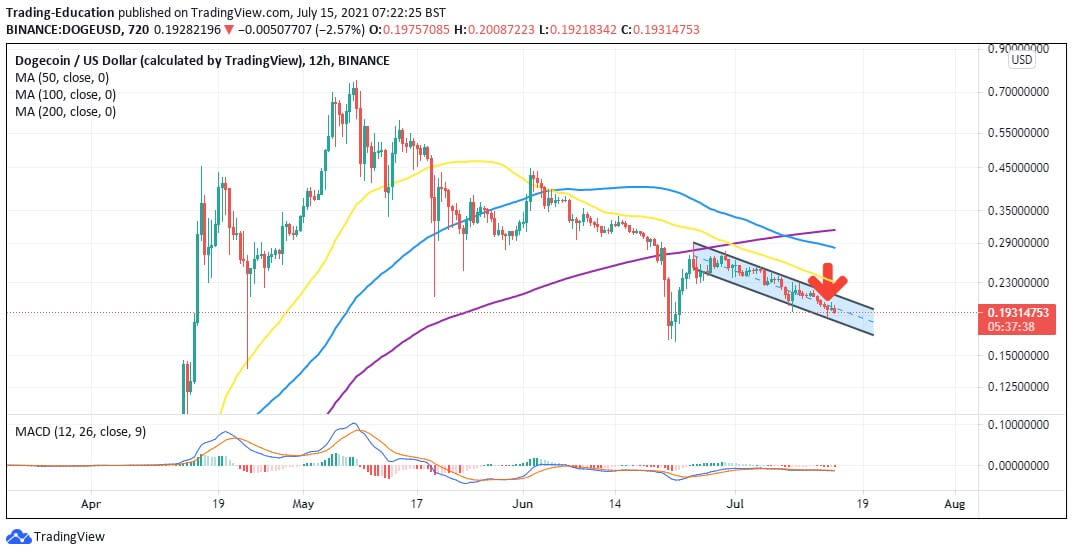 Realize that the call to $0.16 may be nullified if Dogecoin regains the ground above $0.2 soon. Here, stability will begin to return to the market and perhaps call more buyers from the sidelines to the stage. A break above the 50 Simple Moving Average (SMA) may bolster DOGE back to $0.3.