Dogecoin has lost a significant amount of its value following a crucial barrier at $0.233. On Monday, the gains that dominated the market failed to break above $2,400, let alone secure support above $0.23. As overhead pressure soared, bulls momentarily lost grip, paving the way for losses to $0.2.

At the time of writing, Dogecoin is pivotal at $0.2, but the technical picture shows that declines may carry on in the near term. Therefore, bulls must hold firmly to support at $0.2, a move that will keep them focused on gains toward $0.3.

Dogecoin adoption seems to be on an upward roll as Coinbase Commerce accepts payments via DOGE. As DOGE use cases gain traction, Elon Musk’s comments that the meme coin will be a widely used crypto become apparent. The Commerce arm of the prominent exchange announced on Twitter:

Dogecoin is dancing at $0.2, following the retreat from $0.233. A sell order from the Moving Average Convergence Divergence (MACD) indicator adds credence to the bearish outlook. This trend-following tool also calculates the momentum of the meme coin. As the moving average oscillate, buy or sell orders are sent to affirm traders’ specific decisions.

Consequently, a call to sell Dogecoin appeared as the 12-day exponential moving average (EMA) crossed under the 26-day EMA. Note that if the MACD moves toward the mean line, odds for an extended correction will increase. 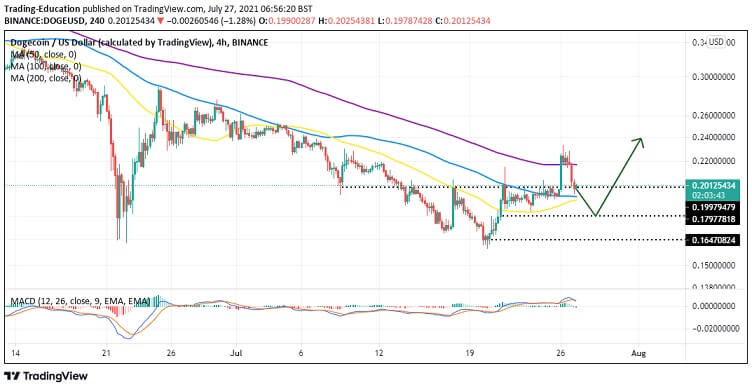 Meanwhile, the 100 Simple Moving Average (SMA) and the 50 SMA are in line to offer the much-needed support. Therefore, with bulls holding at this support, a recovery may ensue. However, failing to secure this zone as support may result in massive losses back to $0.16.