Dogecoin is slowly becoming one of the biggest gainers following the massive losses recorded earlier in the week. The meme coin plunged to $0.16, support established in June. DOGE’s corrected was as a reaction of not holding above $0.2 last week in addition to the intense bearish wave in the market on Monday and Tuesday.

At the time of writing, Dogecoin teeters at $0.18, following a 14% upswing from the support tested the previous day. As stability creeps back into the market, Dogecoin will likely reclaim the position above $0.2 while bulls focus on lifting the coin above $0.3.

Elon Musk, the founder of Tesla, has been openly supportive of Dogecoin above all other cryptocurrencies. He is also referred to as the “Dogefather” and is seems committed to ensuring that Dogecoin becomes one of the most used crypto assets globally amid calls for an upgrade.

Recently Musk affirmed that his baby son, X Æ A-12, is a stout DOGE HODLer. The billionaire purchased the meme coin for his son to show support and making him a “toddler HODLer.” In a tweet confirming his support, Musk wrote:

“Lil X is hodling his Doge like a champ. Literally never said the word “sell” even once!”

Dogecoin price seems to be battling the 50 Simple Moving Average (SMA) resistance on the four-hour chart. The recovery from $0.16 has been persistent, but if this immediate hurdle doesn’t budge, a correction may come into the picture, sending DOGE back on the drawing board.

However, it is essential to realize that the Moving Average Convergence Divergence (MACD) has a bullish impulse. As the 12-day exponential moving average (EMA) crossed above the 26-day EMA, odds for the uptrend spiked. A continuous movement toward the mean line (0.00) and crossing into the positive territory will affirm the bulls’ increasing influence on the price. 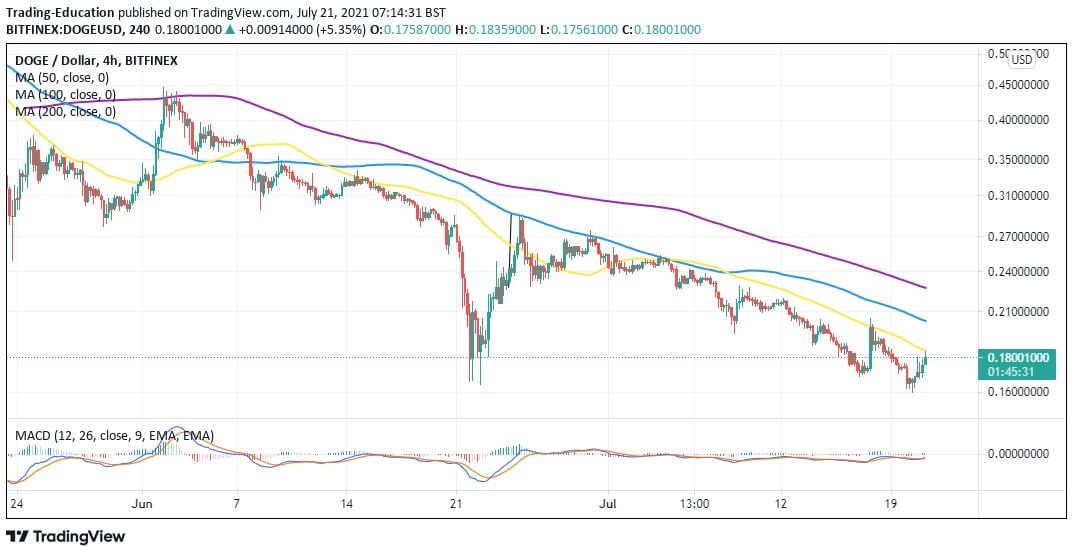 Therefore, bulls must secure higher support above $0.18, allowing them to shift the focus to overcoming the supply barrier at $0.2, as illustrated by the 100 SMA on the four-hour chart.

On the downside, retreat from current price levels may head back to $0.16. Another retest of this support could give way for an extended bearish action, bringing Dogecoin to $0.1.