Dogecoin is pivotal at $0.5 following the most recent retreat from a barrier at $0.6. Over May, the price has generally embraced a downtrend within a descending parallel channel. The 50 Simple Moving Average (SMA) can be commended for keeping bearish advances at bay, thus limiting the declines.

Despite the presence of a descending parallel channel, consolidation seems to be taking precedence at writing. The sideways trading is highlighted by the Relative Strength Index (RSI) on the 12-hour hour chart. This indicator tracks the trend of an asset and measures its momentum. Currently, the RSI is leveling slightly above the midline, hinting at indecisive in the short term.

The Moving Average Convergence Divergence (MACD) indicator neither has a bearish or a bullish signal. The horizontal movement above the mean line (0.00) means that the tug of war between the bear and the bulls is at equal magnitude. 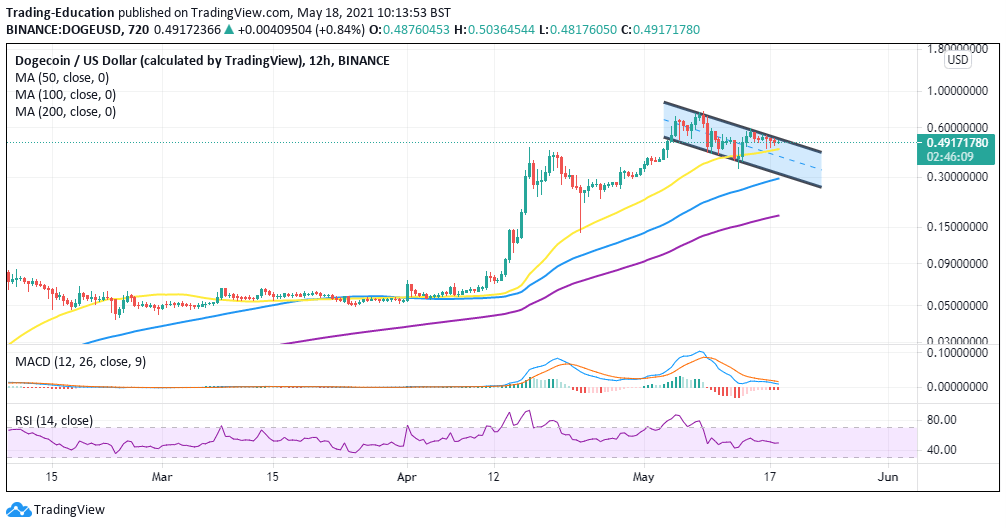 Simultaneously, IntoTheBlock’s “Daily Active Addresses” metrics seem to validate the sideways trading. Over the last week, the number of newly-created addresses has relatively stalled around 43,500. In other words, Dogecoin is no longer getting as much attention compared to the monthly high of nearly 96,500.

If the on-chain picture remains unchanged, the consolidation will last longer. Perhaps, a confirmed break above $0.5 may call more investors into the market, building speculation for gains eyeing $0.75 and $1.

According to the IOMAP model by IntoTheBlock, Dogecoin faces immense resistance between $0.5 and $0.51. Here, roughly 139,500 addresses previously purchased around 11.5 billion DOGE. It could be challenging to break through this zone, which may hinder the uptrend from reaching the all-time of $0.7.

On the downside, Dogecoin sits on top of medium-strong support. This buyer congestion zone runs from $0.47 to $0.49. Here, approximately 41,000 addresses bought 7 billion DOGE. Note that an uptick in overhead pressure could jeopardize this range, paving the way for losses eyeing $0.4 and $0.35 levels, respectively.