Dogecoin bulls have been suffering under the aggressive hands of the bears. Price action across the entire cryptocurrency industry saw selling pressure dominate during the concluded weekend session.

For instance, DOGE could not break above the 50 Simple Moving Average (SMA); instead, it started to lose ground, including the key anchor at $0.3. At the time of writing, Dogecoin trades at $0.29 amid the rush by buyers to secure higher support. The formation of a highly bearish pattern on the four-hour chart hints at a potential drop to $0.15.

The meme coin has endured a prolonged downtrend since the all-time high achieved at $0.75 in the first week of May. It is worth noting that the price made a series of lower highs, while a horizontal line protected the asset's downside at $0.28.

Such market behaviour formed a descending triangle on DOGE's four-hour chart. The horizontal line drawn along the swing highs marks the triangle's x-axis, while a rising trendline created along with the lower highs makes the hypotenuse.

A recent spike in the overhead pressure hindered Dogecoin from advancing higher. However, the selling pressure pushes the price toward a possible 46% freefall. This target is determined by measuring the distance between the two highest points of the triangle and adding it to the breakdown point. 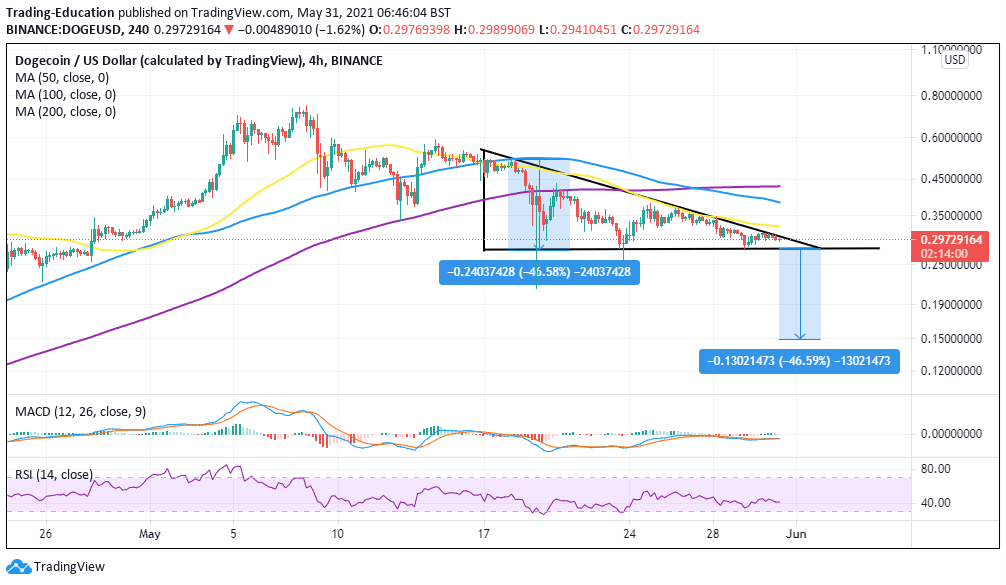 Triangles are also characterized by periods of consolidation before a breakout or breakdown comes into the picture. The ongoing consolidation is validated by the Moving Average Convergence Divergence (MACD) indicator. Following last week's failed attempt to break into the positive region, the trend momentum indicator has leveled marginally beneath the mean line (0.00).

The Relative Strength Index (RSI) emphasizes the same narrative as it straightens slightly before the mean line. However, the RSI has a bearish inclination, suggesting that the slightest resistance path is downward.

On the other hand, holding within the triangle and particularly the anchor at $0.28 would avert losses from coming into play. Thus, bulls will have ample time to focus on reclaiming support above $0.3. Buyers will have to concentrate on trading above the 50 SMA and toward $0.4 to resume the uptrend back to all-time highs.