Dogecoin consolidated in the past few days amid general market indecisiveness. The support at $2.5 allowed bulls to come to the market strongly, but they soon lost momentum under the 50 Simple Moving Average (SMA) on the four-hour chart.

The meme coin trades at $0.345 at the time of writing while bulls battle the hurdle presented by the 50 SMA. As technical levels slowly improve, DOGE is likely to catch momentum and scale the levels above $0.4.

Dogecoin bulls focus on the breakout to $0.56

The four-hour chart illustrates the formation of an asymmetrical triangle. This pattern is known for having both bearish and bullish impulses. It forms amid a consolidating market with two trend lines connecting a series of declining highs and ascending lows.

Note that the lines meet a relatively equal point, but a breakout is anticipated before that happens. Triangles have precise targets measured from the highest to the lowest point.

Dogecoin needs to slice through the resistance at the 50 SMA to validate the uptrend. Moreover, the price will come close to breaking out of the triangle, clearing a path toward $0.56. It is worth mentioning that delays should be expected at $0.42, a confluence created by the 100 SMA and the 200 SMA. 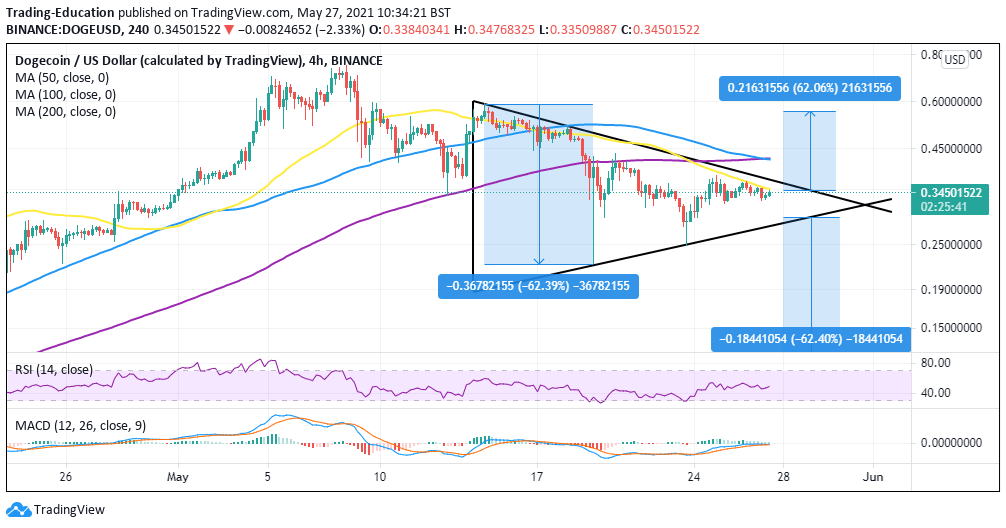 According to the Moving Average Convergence Divergence (MACD), the trend leans toward the bullish side. The recovery from $0.25 was reinforced by the MACD line (blue) crossing above the signal line. If the momentum indicator continues into the positive region, DOGE will flip massively bullish.

On the other hand, the Relative Strength Index (RSI) reveals that the consolidation takes precedence at writing. Hence, we cannot jump that gun and make bullish conclusions. However, a movement toward the overbought will show if bulls have the strength to sustain the uptrend.

The In/Out of the Money Around Price (IOMAP) highlights massive seller congestion between $0.34 and $0.35. Here, nearly 71,200 addresses previously bundled up around 9.8 billion DOGE. Trading above this zone will be challenging; thus, it is imperative to say that Dogecoin is not out of the woods yet.

On the flip side, the on-chain model shows that support levels accorded to DOGE are relatively weak. For instance, the stoutest one runs from $0.31 and $0.32. Here, roughly 72,300 addresses previously purchased 3 billion DOGE. An increase in overhead pressure would increase the potential to crack this support, allowing Dogecoin to resume the downtrend.