Dogecoin incredibly spiked last week after the listing on Coinbase. Immense buy orders were triggered as investor sentiment improved. The listing on the US-based cryptocurrency exchange was more of a validation of the legitimacy of the meme coin.

Following the lift above $0.4, Dogecoin brushed shoulders with $0.45 but failed to sustain the uptrend to $0.5. A reversal came into the picture, forcing Dogecoin to explore levels under $0.4.

At the time of writing, immediate support has been accorded to Dogecoin courtesy of the 50 Simple Moving Average (SMA) and the 50 SMA. Meanwhile, the meme coin trades at $0.37 amid a vivid sideways price action.

Market indecision suggests that neither bulls or bears can take complete control of the asset’s trend direction. In other words, the tug of war will likely drag on before a significant move comes into play.

The mundane price action seems to have been validated by the Moving Average Convergence Divergence. Currently, the trend momentum indicator is leveling at the zero line. This confirms that we are yet to receive a buy or a sell signal.

However, traders can lookout for a buy signal if the 50 SMA continues to hold. This signal will manifest as the MACD line (blue) crosses above the signal line. A break past $0.4 would also trigger more buy orders amid improving investor sentiment and speculation for approaching higher price levels. 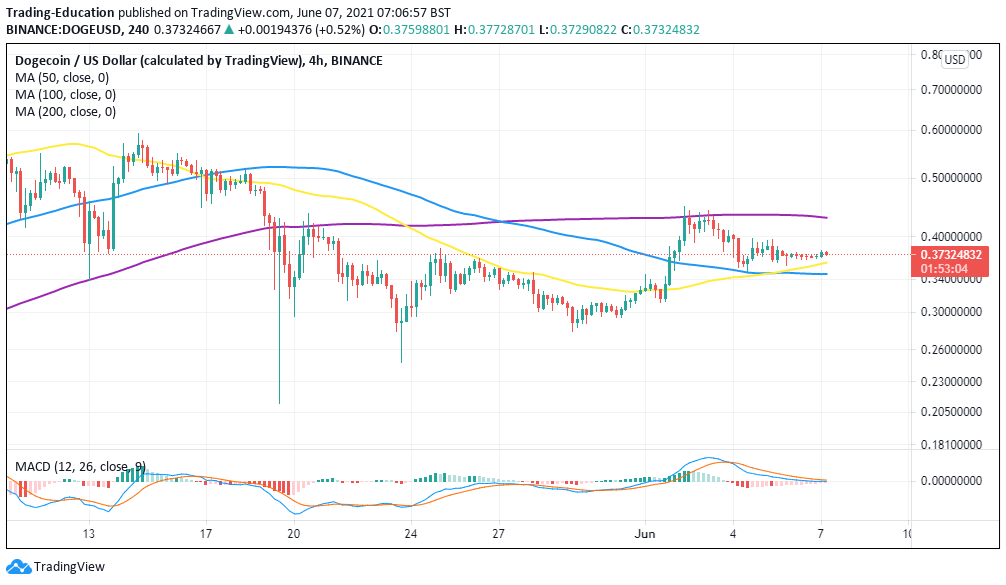 IntoTheBlock’s “In/Out of the Money Around Price” (IOMAP) model reveals a substantial supply barrier that will prevent Dogecoin from achieving its upside potential. Based on this on-chain metric, this region runs from $0.405 to $0.417. Here, roughly 75,000 addresses are holding 3 billion DOGE.

This area may have the ability to absorb some of the buying pressure seen recently. Holders who have been underwater may try to break even on their positions, slowing down the uptrend.

On the flip side, the IOMAP cohorts show that DOGE sits on top of stable support. Nearly 83,400 addresses bought 2.6billion DOGE between $0.315 and $0.326. This crucial area of interest suggests that bears will struggle to push prices down. Right now, Dogecoin has no bullish or bearish inclination.

On the flip side, failing to hold above the 100 SMA and the 50 SMA would see overhead pressure increase extensively. Another technical support is expected at $0.34 and $0.28, respectively.