Dogecoin Price Prediction: Resilient DOGE Crawls Toward $0.4 But is the Uptrend Sustainable?

Dogecoin rallied after the support at $0.24 and reclaimed the descending parallel channel on the four-hour chart. The recovery encouraged more buyers to join the market, leading to gains above the middle boundary. Nonetheless, the uplift's momentum dwindled under the 50 Simple Moving Average (SMA).

A correction ensued with Dogecoin drifting from the weekly high of $0.38 to highs toward the channel's middle boundary. At the time of writing, the meme coin is teetering at $0.34 amid the persistent push by the bulls to overcome the 50 SMA and extend the price action beyond $0.4.

The Moving Average Convergence Divergence (MACD) seems stuck in the negative region despite the bullish outlook. Investors are still skeptical of the general recovery of the crypto market, afraid of being caught in bull traps. Hence, the MACD line crossing above the signal line has little impact on the stalling uptrend.

According to the Relative Strength Index (RSI), the waning technical outlook will likely continue in the near term. For instance, this trend strength indicator has slipped beneath the midline, implying that the uptrend strength is fading. 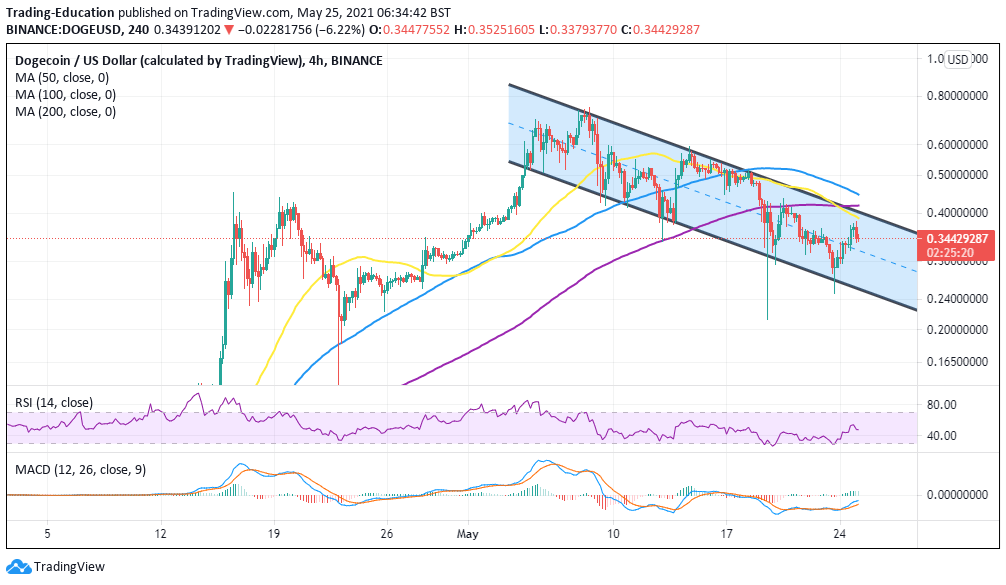 Dogecoin's 'gravitational' pull is reinforced by the SuperTrend indicator and the Parabolic SAR. The former flashed a sell signal when DOGE hit the barrier at $0.75. This call to sell manifests with the indicator turning red and flipping above the asset's price. If the bearish technical outlook on the chart remains unchanged, the pull toward the support at $0.24 may continue. 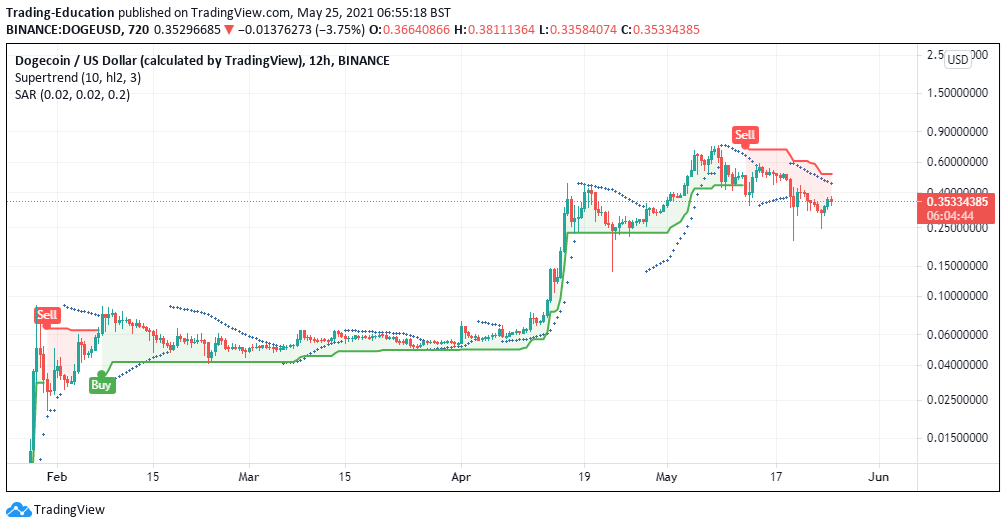 The Parabolic SAR is a chart overlay indicator that tracks the trend of an asset. It is helpful when identifying short-term trends. For example, as the parabolas (dots) move above the price, it implies time to sell in preparation for another downswing. However, the Parabolic SAR must be used alongside other technical patterns and indicators to ascertain the specified trend.

If Dogecoin holds within the upper column of the descending channel, bulls will have ample time to focus on the recovery mission. Closing the day above the 50 SMA on the four-hour chart would be a massive bullish signal. Similarly, trading past $4 could trigger immense buy orders while attracting more investors amid renewed speculation for gains toward $0.75.