EOS price action has been eventful in the last week. Initially, the smart contract token lifted from support established at $8 and stepped above several resistance levels at the 50 Simple Moving Average (SMA), $10 and $13. The bullish moment pushed to $15, but the remaining journey to $20 was cut short by increasing selling activities.

The bearish wave in the market has lasted from the American session on Wednesday. Investors across the board reacted to Tesla’s decision to stop vehicle purchases using Bitcoin due to environmental concerns brought about by mining. Bitcoin dived from highs above $55,000 and tested support at $46,000. Currently, BTC is pivotal at $50,000, with recovery to $60,000 still hampered.

Similarly, EOS dived to $10 alongside other crypto assets that incurred significant losses, such as Ripple, Stellar, and Polkadot. The 50 SMA on the four-hour chart is the barrier between EOS and levels below $10. In other words, EOS is trading at $10 while the downside holds onto the 50 SMA immediate support. 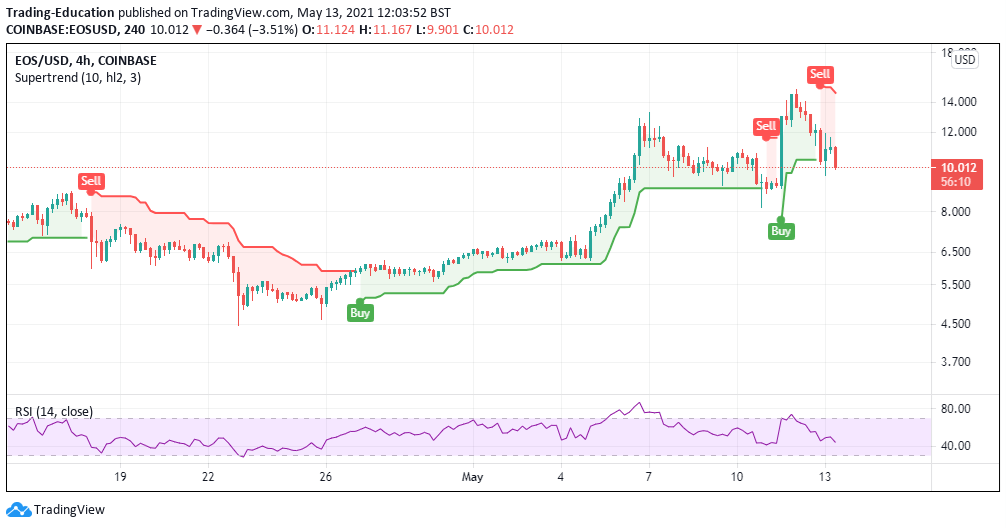 The bearish narrative appears to gain momentum at the time of writing, especially with the Moving Average Convergence Divergence (MACD), dropping fast toward the mean line (0.00). In addition to that, the MACD line recently slipped beneath the signal line, emphasizing the bearish outlook.

The four-hour SuperTrend indicator has also flipped bearish following the retreat from highs around $15. This indicator tracks the trend of an asset and identifies the prevailing trend. Traders can also use the SuperTrend to mark positions for shorting or longing an asset. For now, the sell signal suggests that bears are in control and declines are bound to continue.

As the Relative Strength Index (RSI) on the four-hour chart drops closer to the oversold area, the bearish grip tightens. Therefore, it might be an uphill battle for bulls to take back control immediately.

On the other hand, holding above $10 will likely bring back market stability, allowing bulls to shift the focus toward pushing for recovery.