Bears in control. Without a major bullish reversal, bearish sentiment could extend all week

Ethereum was trending lower on Wednesday evening, a trend that extended to the early hours of Thursday trading. By daybreak, it was trading at $2,645.25, a key support level on the 23.6% Fibonacci.

This support held and gave Ethereum an upside boost for the better part of the morning hours. Ethereum kept gaining until early afternoon when bulls failed to test key weekly resistance at $2,910.78.

Failure to test this resistance was indicative of bullish weakness, and Ethereum started trading sideways from that point. It went on this way until the end of the day.

At the moment, Ethereum is trading at $2,644.74 and is down 5.93%. The sideways trading extended into Thursday, and before daybreak, a broader market selloff saw Ethereum bulls break. Ethereum has turned bearish from that point onwards. 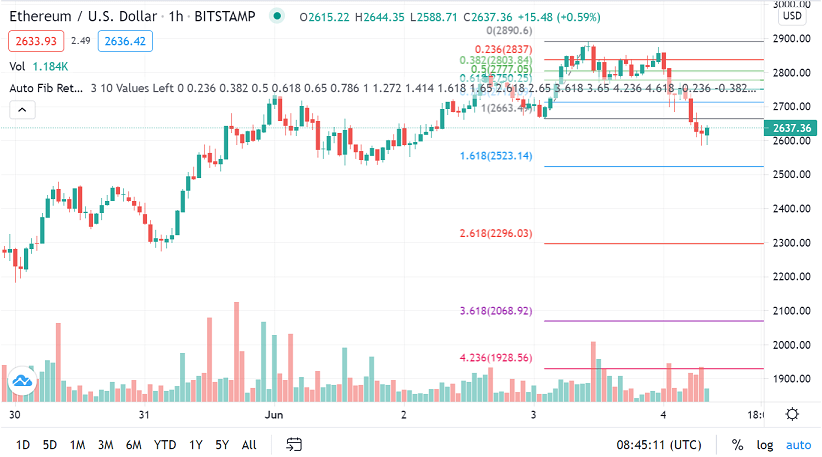 A broader market selloff has seen Ethereum retest the 23.6% support at $2,645.25 for the second time in 24-hours. It is currently trading along with this support level, and it seems to be holding.

If the broader market selloff persists and this support breaks, there are two other key support levels to watch in the day.

The first one is the 200-day moving average level at $2,591.68. This is a key intraday support level that Ethereum has bounced off of in the last 72-hours.

If it breaks, it would be an indicator that bearish sentiment is getting stronger in the market. It would also bring the 38.2% Fibonacci support at $2,481.64 into play. An extensive sell-off through this support would mark the beginning of a short-term bear trend that could extend into the weekend.

However, if the selloff eases off in the day, and any of the key support levels hold, Ethereum could trade in a range between $2,481.64 and $2,700 for the rest of the weekend.

For Ethereum to test the $2,910.78 resistance today or on the weekend, there would have to be a strong rally in the broader market.

But if weekend trading history is anything to go by, then the Ethereum retesting resistance before Monday is low. Cryptos tend to correct or trade sideways on weekends.

This weekend doesn’t seem to be any different, and Ethereum has already breached key support levels.

Litecoin had a relatively mixed day in Thursday’s session, an extension of the low momentum on Wednesday night.

On Wednesday evening, Litecoin was trading along a key resistance at $188.09 on the 23.6% Fibonacci but failed to hold. This weakness extended into early Thursday morning trading, but Litecoin found some support on the 200-day moving average at $182.49.

This gave bulls some upside momentum to push through the $188.09 resistance. However, without much momentum from the broader market, Litecoin could not rally hard enough to test key resistance at $208.81.

Lack of bull power saw Litecoin trade sideways for the better part of the day, a weakness that extended into early Thursday morning trading.

Litecoin is currently trading at $173.10 and is down by 9.25%. It started Thursday’s trading session with low upside momentum.  A broader market selloff has seen Litecoin drop hard and breach a couple of key support levels. 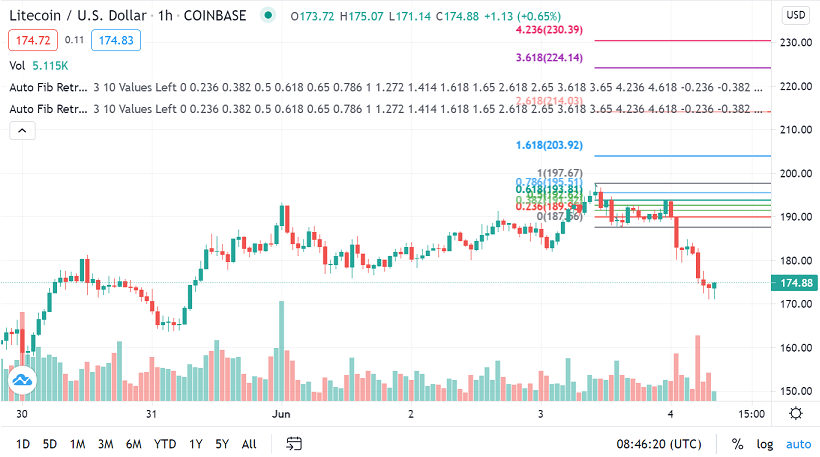 Litecoin has been bearish for the better part of Friday morning. This followed a selloff in the broader market.

If the broader market selloff extends for the rest of the day, then $165.07 would come into play. It is a key support level on the 50.0% Fibonacci retracement. A breach of this level would mark a short-term bear run that could extend all through the weekend.

It would take some strong buying momentum in the broader market for Litecoin to retest the $188.09 resistance today. That’s considering that weekend trading is usually low volume and sluggish at best.

Ripple’s XRP ended Thursday’s trading session higher by 2.06%. This was a build-up to the 1.43% gains that it recorded on Wednesday.

After a pretty directionless evening on Wednesday, Ripple’s XRP extended the same into early Thursday trading.

However, it found some support on the 50-day moving average at $1.01560. This support was pretty strong and held all through Thursday’s trading session.

It was a pretty low momentum day though, a signal that broader market movement could easily influence XRP’s direction.

At the moment, Ripple’s XRP is trading at $0.9399 and is down by 9.08%. For crypto that was directionless for 24-hours, bearish sentiment in the broader market has sent it crashing. 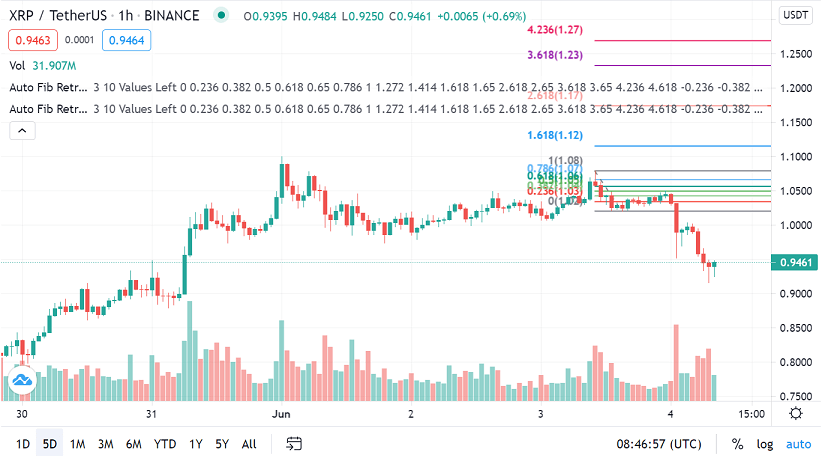 Ripple’s XRP is currently pushing lower and is now at $0.9298. This is a key support level on the 38.2% Fibonacci retracement.

If the selloff in the broader market continues and this support breaks, the 50.0% Fibonacci support at $0.8790 would come into play.

This would also mark the possible start of a short-term bear trend that could last all through the weekend.

Given that weekends are usually bearish or directionless for crypto, there is little chance for any upside to see XRP test key weekly resistance at $1.0967.