Key support levels at play today: If they break, it could be a bearish weekend.

Ethereum closed Thursday, trading lower by 5.35%. This saw it erase the gains it had made on Wednesday. By the end of the day, it was trading at $2471.59.

Ethereum started Thursday trading bullish. This was a buildup to the momentum that started on Wednesday afternoon. By Wednesday night, Ethereum had enough momentum to push through the 50.0% resistance at $2573.90.

However, without momentum from the broader market, it could not sustain momentum above this resistance.

This saw it retrace and keep trading lower for the better part of Thursday morning.  By mid-morning, Ethereum had tested key support at $2499.50 on the 61.8% Fibonacci.

This support held and energized bulls to retake control. Ethereum kept inching higher for the better part of the afternoon, and by evening, it had retested the 50.0% resistance at $2573.90.

Failure to push through this resistance was an indicator that bullish momentum was not strong enough.

The result was a bearish reversal that lasted all through the day. By the end of the day, bears had driven Ethereum through the 61.8% support at $2499.5 to make new lows for the day.

Ethereum is currently trading at $2462.86 and was down by 4.01% at the time of writing. It started the day bearish after bears pushed it through key support in late Wednesday trading.

In the first two hours of Thursday trading, bulls tried to take control. However, they failed to push it back through the 61.8% support, which was now an intra-day resistance level.

It has been going down from that time up to the time of going to press. 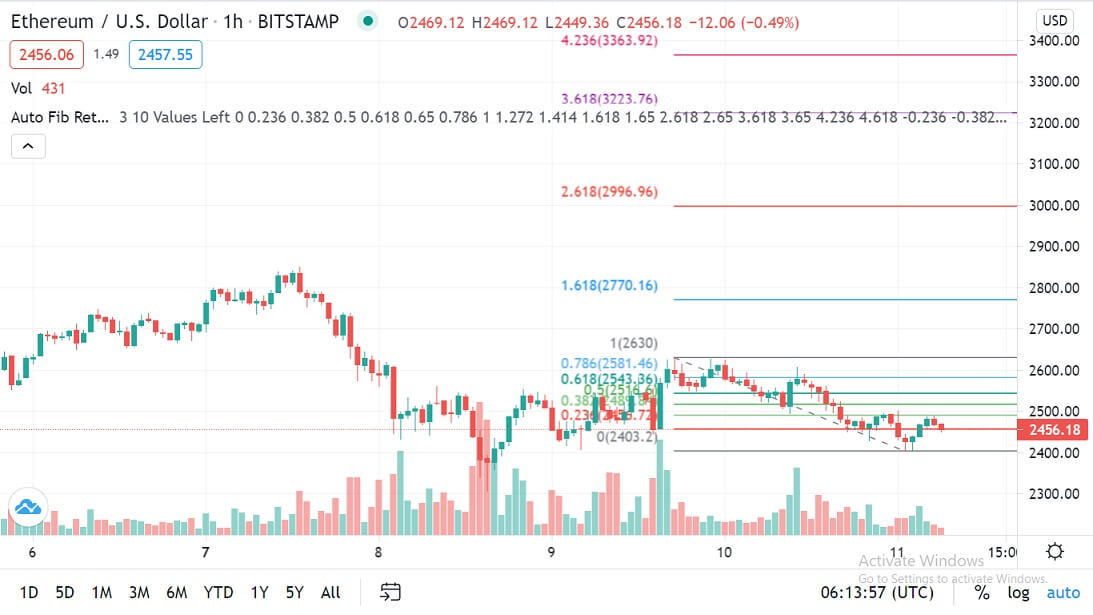 If bearish momentum increases in the broader market, then Ethereum could test new lows in the day.

In such a scenario, the first key support to watch would be $2260.50. This is a critical level in the day because, if it breaks, then Ethereum could be deep in bear territory.

There would be a risk of it trading in the red all through the weekend.

If bullish sentiment is strong enough to push through these levels, especially the 38.2% Fibonacci, it would indicate a strong bullish reversal.

In such a scenario, Ethereum could keep gaining all through the weekend.

On the other hand, if there is little activity in the market, Ethereum could trade in a range. In such a scenario, it could oscillate between the 61.8% Fibonacci, and $2306.3 (a two-day low), all through Friday.

Litecoin dropped by about 2.6% in Thursday’s session. This saw it eat into some of the gains that it had made on Wednesday. By the end of the day, it was trading at $168.05.

Litecoin started Thursday trading bullish. This followed a strong rally on Wednesday that saw it push through resistance at $171.19 on the 50.0% Fibonacci.

However, this momentum did not last long. Litecoin retraced and kept trending lower for the better part of the morning without support from the broader market.

This support held and re-energized bulls. However, they could not push LTC through the 50.0% Fibonacci at $171.19, now an intra-day resistance.

The result was that Litecoin formed a double-top and traded lower for the rest of the day. By the end of Thursday, it was trading at the 38.2% support, and it held.

With the 38.2% support at $164.97 support holding on Thursday, bulls took charge in early Friday trading.

Since then, they have been in control and have pushed it to retest the $171.19 resistance on the 50.0% Fibonacci. 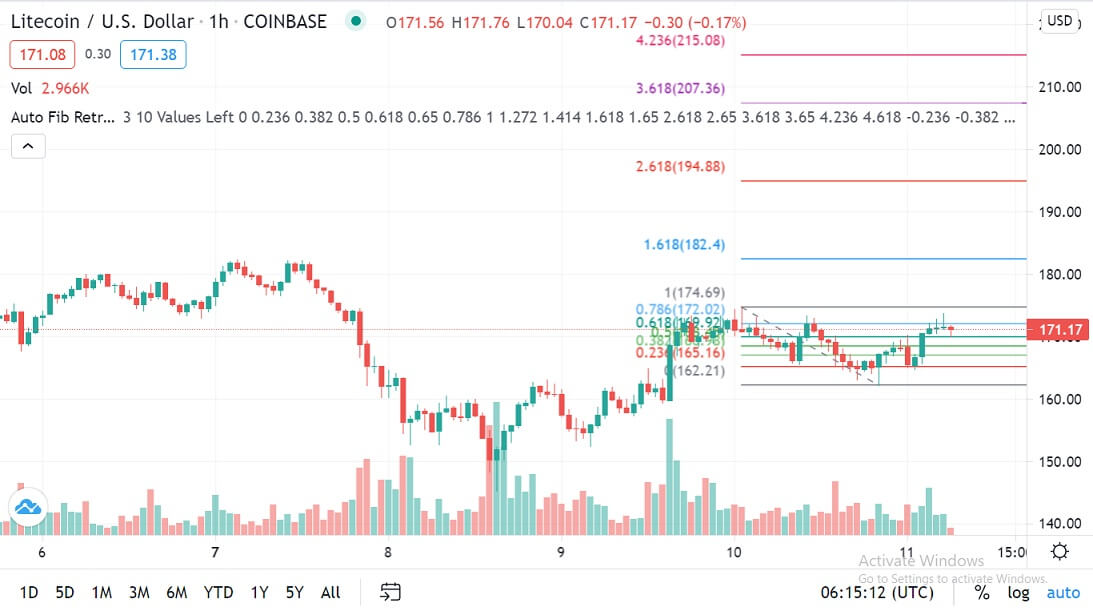 If bulls sustain the current momentum and push Litecoin through the 50.0% Fibonacci at $171.19, then it would be an indicator that they are strong.

In such a scenario, the next level to watch would be the 61.8% Fibonacci resistance. If this level is broken, then it would be an indicator of bullish strength.

It could mark the beginning of an uptrend that could last all through the weekend.

However, if bulls fail to push Litecoin through the 50.0% fib, then the next key level to watch would be $164.97. It has been a key support level in the last 24-hours.

If there is a selloff in the broader market and this support fails, then the next key support to watch would be the 23.6% fib at $164.97.

If this too fails, then it would mark the beginning of a bear trend that could last all through the weekend.

Ripple’s XRP dropped by about 5.79% on Thursday. This saw it eat into the gains that it had made on Wednesday.

Ripple’s XRP started Thursday trading bullish, a build-up to the momentum that started on Wednesday.

This saw it push through key resistance at $0.9033 on the 38.2% Fibonacci in early Thursday morning trading.

However, XRP could not sustain above the $0.9033 resistance without much support from the broader market.

The result was a correction that led to a bearish trend all through the day. By the end of day Thursday, XRP was trading at a key support level at $0.8575 on the 23.6% Fibonacci.

XRP is currently trading at $0.8727 and is down by 1.75%. It started Friday morning in the green after the $0.8575 support held for the better part of Wednesday night.

However, this didn’t last, and a few hours into the day, it breached the 23.6% fib support.

It has since regained some momentum and is back above support at the time of writing. 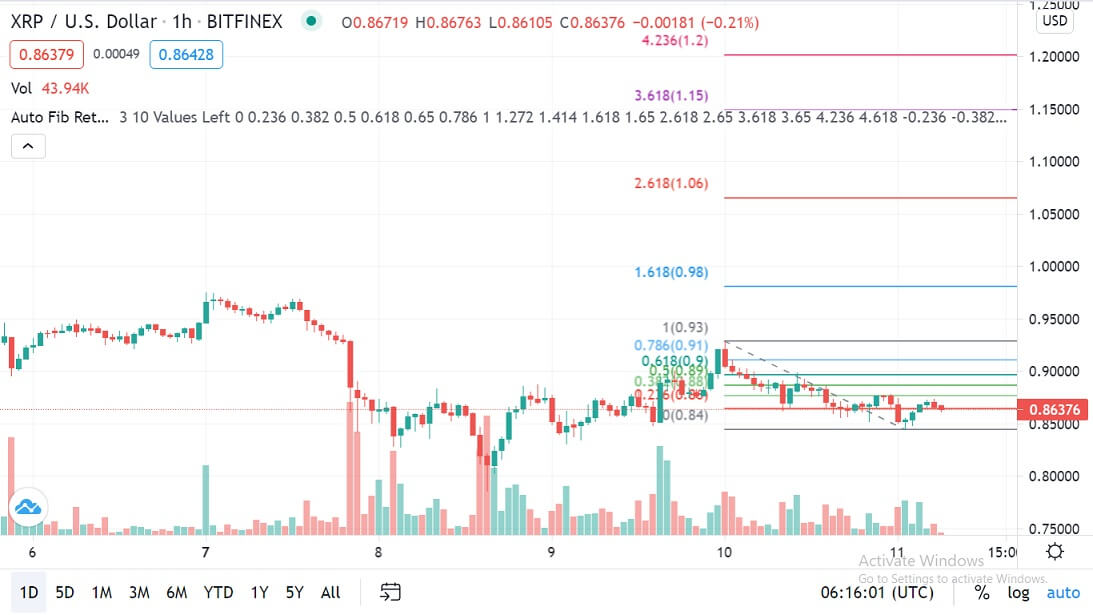 If this is breached, then XRP could turn trade in bearish territory all through the weekend.