Key resistance levels at play: Failure to push through these levels could see majors turn bearish in the day.

Ethereum started the week trading on a key weekly support level. This saw it spike in the first hour of Monday’s trading.

It traded at this price level for a few hours, but with rising bullish momentum in the broader market, this support held. It was tested twice in mid-morning trading, and it proved strong.

By early afternoon, the entire market was bullish and Ethereum strongly bounced off the 38.2% Fibonacci support. Its momentum increased when it pushed through the 200-day moving average resistance at $2510.30.

This momentum saw Ethereum rally all through the afternoon and test key resistance at $2556.51 on the 50.0% Fibonacci. It traded at this price level for a few hours before it spiked and pushed through it.

However, broader market momentum eased up towards the end of the day. The result was that Ethereum could not test key resistance at the 61.8% Fibonacci. This energized bears, and led to a sharp correction in the day, forcing the price back through the 50.0% Fibonacci.

Nonetheless, the broader market momentum was short-lived. This saw Ethereum pick up upside momentum at the last hour of the day.

Ethereum is currently trading at $2616.43 and is up by 4.49%. It started the day in the green, and within the first three hours of the day, it had pushed through the 50.0% Fibonacci resistance.

This saw it rally for the better part of the morning and is currently trading at $2630.20. This is a key resistance level on the 61.8% Fibonacci. The bullish momentum that started earlier in the day seems to be easing up, though. 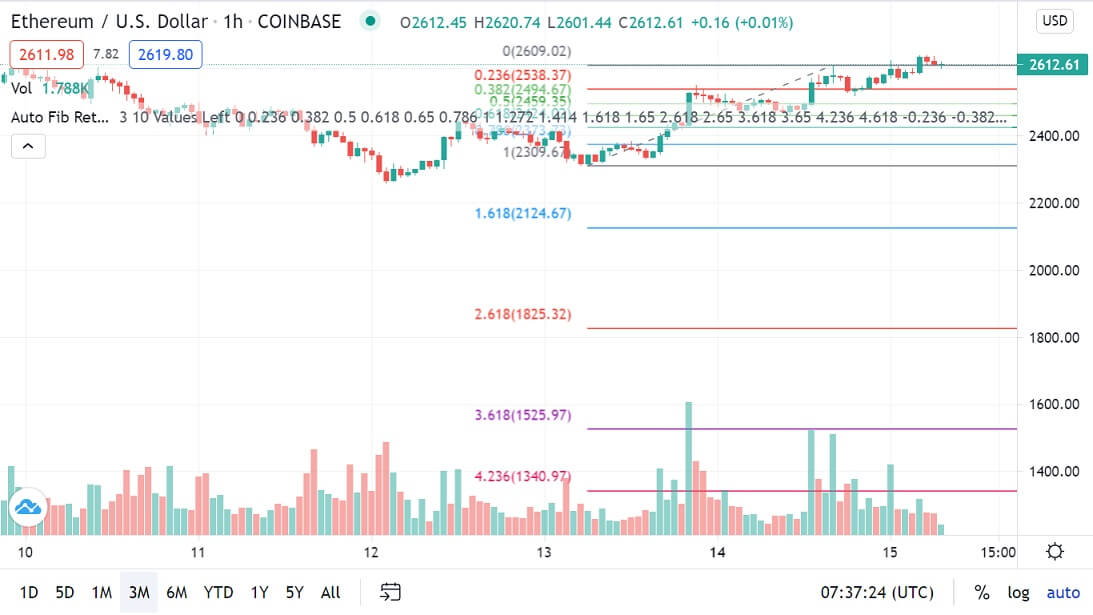 Ethereum is currently trading at a key resistance level at the 61.8% Fibonacci, and bears seem to be taking control.

If bearish sentiment engulfs the broader market, then the key level to watch would be the 50.0% Fibonacci, which is now intra-day support.

If this level breaks, then Ethereum could test $2484.25. This is the next key support level on the 38.2% Fibonacci.  Failure for this level to hold could mark the beginning of a short-term bear trend.

On the other hand, if bullish sentiment sustains in the broader market. The key level to watch would be the 61.8% Fibonacci resistance.

If the momentum is strong enough to push through this price level, then it could be a pretty bullish day for Ethereum. There could be a possibility of testing price levels above $2800.

On the other hand, if there is no momentum in the broader market, then Ethereum could be range-bound in the day. In such a scenario, it could trade between the 50.0% Fibonacci as support, and the 61.8% Fibonacci at $2556.61 and $2630.20 respectively.

Litecoin started the week trading in a range.  This is reflected in its price action in Monday trading.

With increased momentum from the broader market, the 200-day support held, and Litecoin started gaining from this point onwards.

Litecoin’s upside momentum increased significantly after it pushed through the 50.0% Fibonacci with high volumes. The result was a bullish trend that lasted all through the day.

By early evening, Monday, Litecoin was trading at $174.94. This was a key resistance level on the 61.8% Fibonacci.

Litecoin is currently up by 5.83% and is trading at $178.86. It started the day in the green, after bulls pushed it through the 61.8% Fibonacci, making it intra-day support.

It has been trending upwards since then, up to the time of going to press. 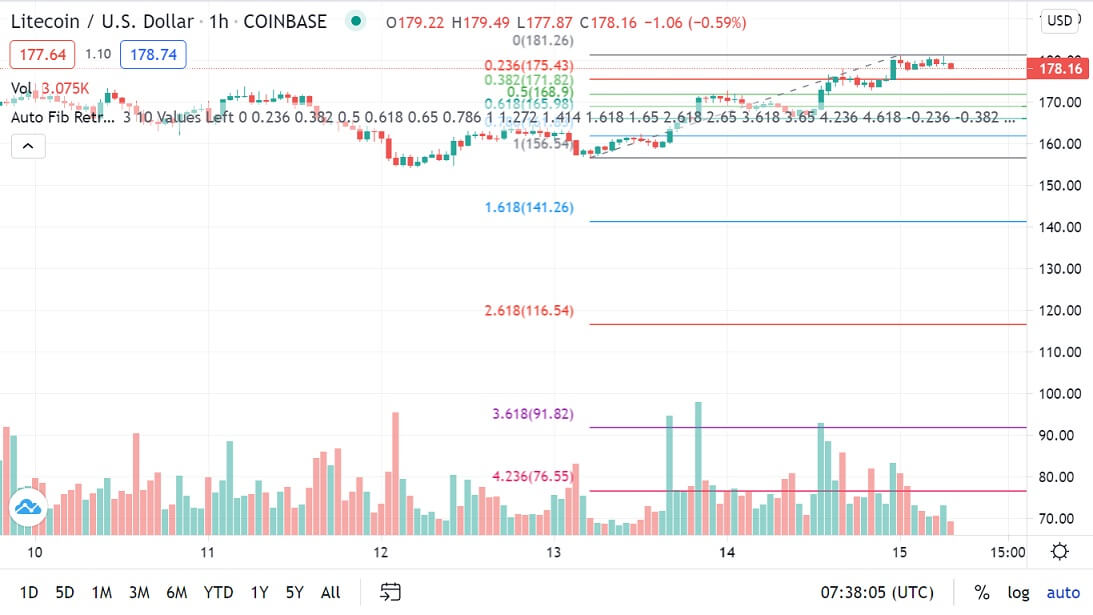 This is a multiple-day resistance point for Litecoin, and if it’s broken, then Litecoin could test $190 in the day.

On the other hand, if overall market momentum eases up, then the 61.8% Fibonacci support would come into play. If it holds, then Litecoin could bounce back up or range around it for the day.

However, if bearish sentiment engulfs the broader market, and the 61.8% support fails to hold, then Litecoin could see a bearish reversal. In such a scenario, the 50.0% Fibonacci support at $169.17 would come into play. If it fails, then bears could take control for days.

Ripple’s XRP, like most cryptos, XRP was in the green for the better part of Monday. However, its upside momentum was not as strong as the other crypto majors.

XRP started Monday trading bearish. This was after it failed to push through key resistance at $0.884 on the 38.2% Fibonacci.

It kept trading lower all through the morning. However, an increase in broader market sentiment saw it rally in the afternoon, and push through two key resistance levels. These are the 38.2% Fibonacci at $0.8843, and the 50.0% Fibonacci at $0.9155.

However, this momentum was short-lived, and by the end of the day, it was trading at the 38.2% Fibonacci, which was now intra-day support. 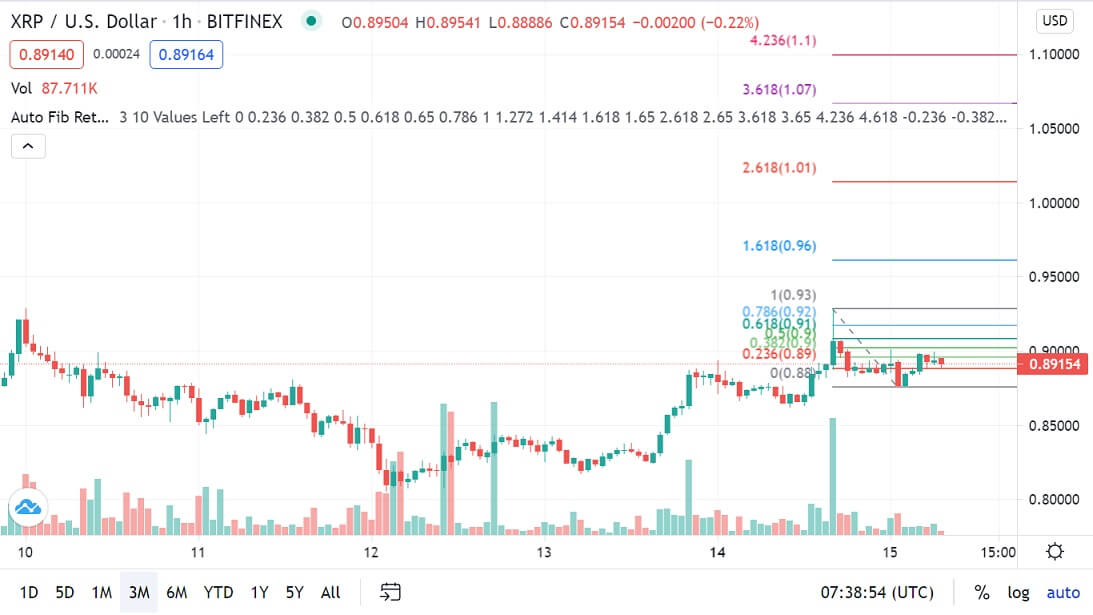 XRP seems to be decoupled from broader market sentiment today. However, if for whatever reason, it holds firmly above this price level, then there would be a chance of gaining some upside momentum.  In such a scenario, the 50.0% resistance could be the next key target to the upside.

On the other hand, if the 38.2% Fibonacci fails, then the 23.6% Fibonacci support would be the next target. If this level breaks, then XRP could be bearish through the day.