Ethereum was largely bearish in yesterday’s trading session and extended the losses it had incurred in Tuesday’s session. This saw it end the day lower by 6.8% and was at $2367.73 by the end of the day.

Ethereum started Wednesday at $2546.80, a critical support level on the 50.0% Fibonacci retracement.

This was after bears breached this support on Tuesday. Bulls tried to regain control in the first 3-hours of Wednesday trading, but the 50.0% Fibonacci became a key source of resistance in the day.

The result was a continuation of the bear-trend for the better part of the early morning.

By daybreak, selling momentum eased up, and buyers tried to reverse the trend. However, they were not strong enough and only managed to get Ethereum to retest the 50.0% Fibonacci resistance a second time.

Failure to break through resistance for the second time hours apart was a signal of strong bearish momentum. The result was that bears took control of Ethereum for the rest of the day.

However, buyers managed to push and hold the price above this support in late Wednesday trading. By the end of day Wednesday, Ethereum was oscillating around the 23.6% Fibonacci support.

At the moment, Ethereum is trading at $2421.86 and is down by 4.21%. In the early hours of Thursday trading, Ethereum started the day holding strongly above the 23.6% Fibonacci support.

It then briefly broke through it before buyers pushed it back through support. At the time of writing, Ethereum is oscillating above this support level. 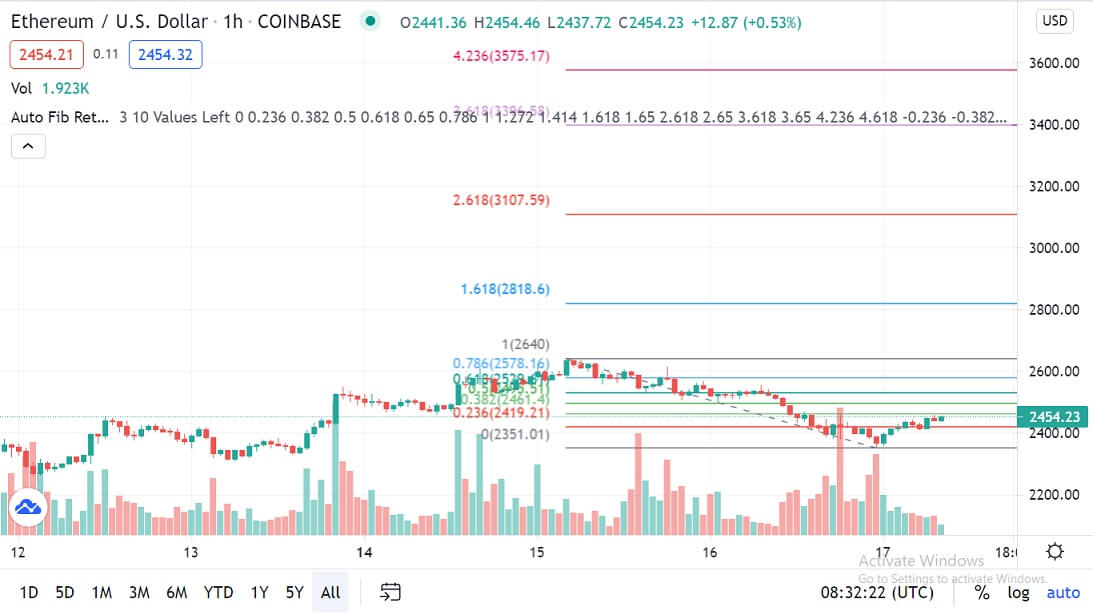 In the day, the key level to watch will be the 23.6% Fibonacci at $2391.89. This is the price level that will determine if there will be a pullback or bears will be in control all through into the weekend.

If there is a selloff in the broader market, and the 23.6% Fibonacci support fails, it could mark the beginning of a bearish day for Ethereum. In such a scenario, Ethereum could test lows below $2200.

On the other hand, if bulls take charge in the broader market and Ethereum rallies, the most important price to watch would be 38.2% Fibonacci at $2477.50. This is key intra-day resistance, and if it’s broken, Ethereum could add gain all through the weekend.

Litecoin was trading at $175.75, a key intraday resistance for the better part of Tuesday evening. By the end of the day, it had failed to push through this resistance.

Litecoin bulls attempted to retest this price level in early Wednesday morning but failed. This saw it form a double top, and turn bearish from that point on.

By afternoon, the selloff was so strong that it broke through the 61.8% Fibonacci support at $169.92.

It kept trading lower, and by the end of the day, Wednesday was trading at the 50.0% Fibonacci support at $165.17. This support was quite strong and held for the better part of the evening.

At the time of writing, Litecoin was trading at $172.10 and was down by 1.66%. Litecoin started Thursday’s trading quite bullish, and the 50.0% support held strong in late Wednesday trading.

Bulls were strengthened by the fact that this support was tested again by daybreak and held.

Since then, Litecoin has been trending upwards and has even pushed through $169.92.  This was a key short-term resistance on the 61.8% Fibonacci. 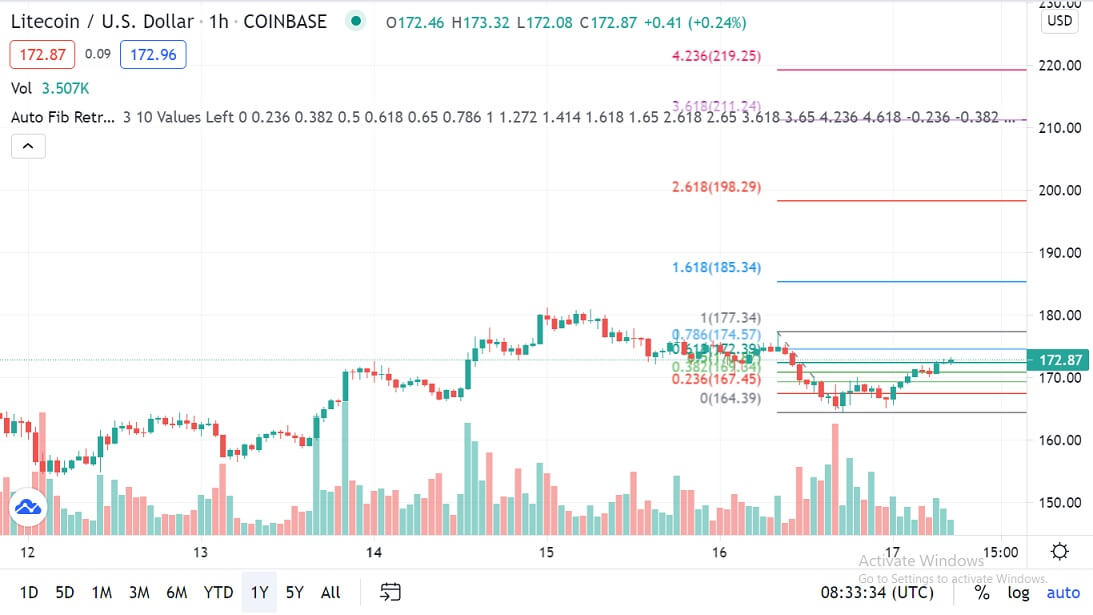 Litecoin is bullish in the day. If broader market sentiment rises and Litecoin keeps gaining, the 48-hour resistance at $175.47 would come into play.

Pushing through this resistance could mark the beginning of a bull trend that could last all the way into the weekend.

On the other hand, if bearish momentum engulfs the broader market, the first price level to watch would be $169.92 on the 61.8% Fibonacci. This is now becoming intra-day support as Litecoin keeps trending upwards.

If this is broken, the next key price level to watch would be $165.17. This is a key support level on the 50.0% Fibonacci and could mark the start of short-term bear trend.  Such a trend could last all through the weekend.

On the other hand, if there is little momentum in the broader market and Litecoin eases up, it could enter a range in the day. In such a scenario, it would oscillate between the 61.8% fib as support, and $175.47, a 48-hour resistance level.

Ripple’s XRP was largely bearish all through Wednesday. This was a continuation of the bearish momentum that started on Tuesday. The bearish sentiment was so strong that it broke through the 200-day moving average at $0.858. It is also broke through the 38.2% Fibonacci at $0.856.

By the end of the day, XRP had found support at 23.6% Fibonacci. This support held all through the evening. This momentum spilled over into Thursday trading.

At the time of writing, XRP was trading at $0.86 and was down by 1.30%. It started the day with gains, and is currently trading at a key resistance level on the 38.2% Fibonacci. 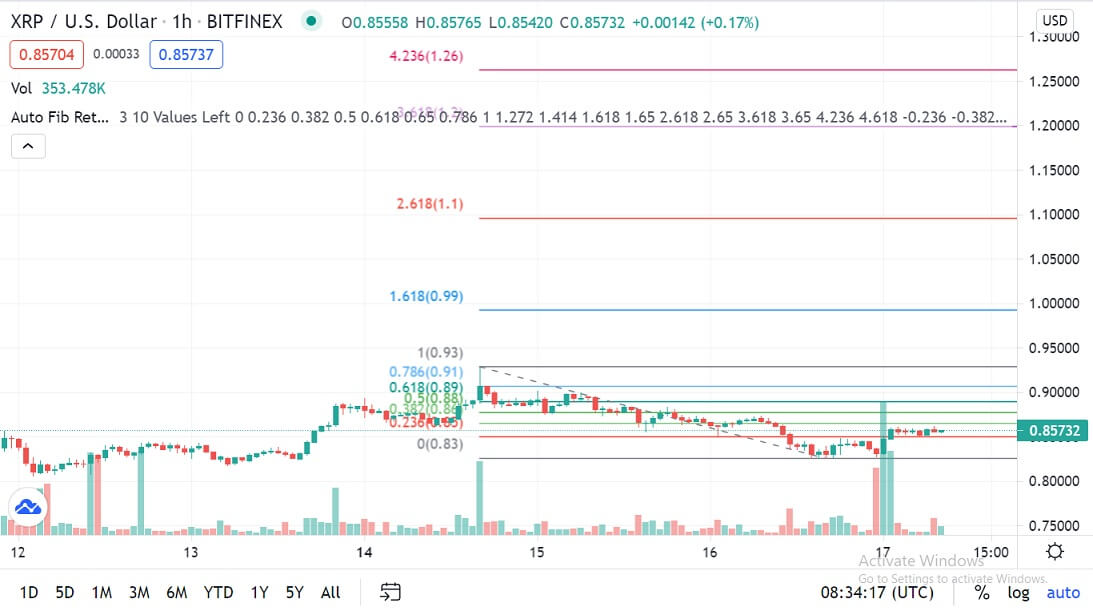 If XRP has enough momentum to push through this level, it would be an indicator that bulls are quite strong. It could see XRP rally all through the weekend.

On the other hand, if broader market momentum turns bearish, and the $0.856 resistance fails, then the 23.6% Fibonacci support at $0.8284 would come into play.

If this support fails, then XRP could turn bearish in the day.