Ethereum ended Thursday lower, a continuation of the bearish trend that started on Wednesday. By the end of day Thursday, Ethereum was trading at $2335.41.

Ethereum started the day bearish after it broke the 23.6% Fibonacci support at $2393.2. However, after more than 24-hours of selling, it quickly got oversold. This saw it gain upside momentum and push back through the 23.6% Fibonacci.

It then gained for the better part of the morning, but by mid-day, did not have enough momentum to test the 38.2% Fibonacci resistance at $2478.8.

The result was that Ethereum quickly turned bearish and continued the selloff that had started earlier in the day. The selloff was so strong that Ethereum pushed through the 23.6% Fibonacci support with high volumes.

By the end of the day, it was trading at $2309.0, a multiple-day support level. This support held, and Ethereum started gaining upside momentum through the last few hours of Thursday trading.

At the time of writing, Ethereum was trading at $2357.25 and was down by 2.57%. Ethereum started Thursday in the green. This was after the $2309.0 support held in early morning trading.

It gained for a couple of hours but lacked the momentum to push through the 23.6% Fibonacci. This has seen the bearish sentiment that is already a dominant force in the market continue. 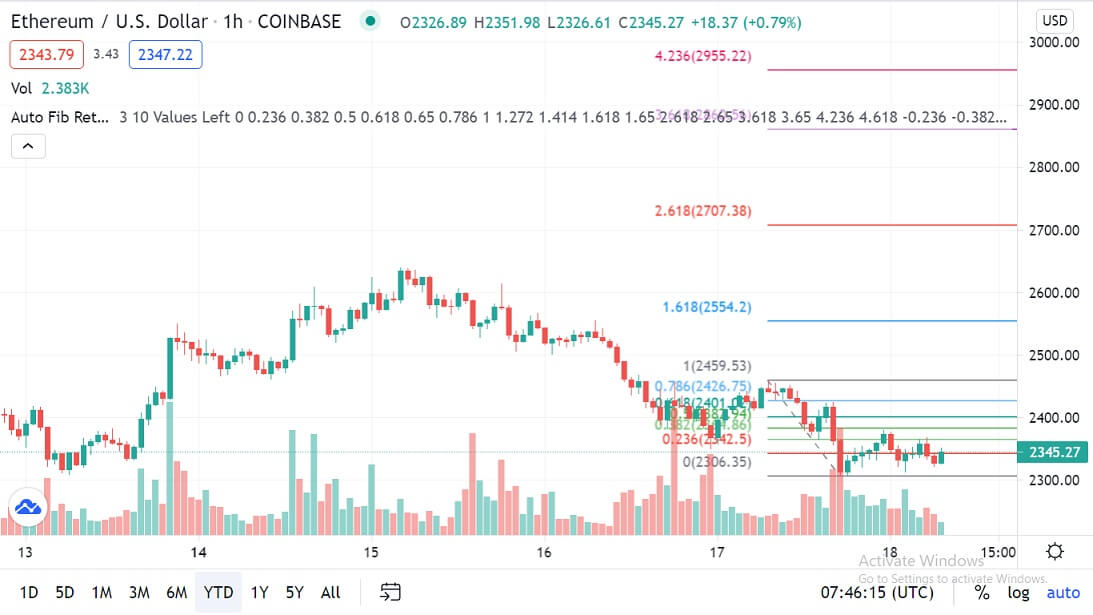 If bearish sentiment increases in the broader market, then Ethereum could trend lower for the better part of the day. In such a scenario, the key price to watch would be $2256.0.

This is a weekly low, and if it is broken, then it could be a bearish weekend for Ethereum. In the event that this price level is broken with high volumes, then Ethereum could test price levels below $2100 in the weekend.

On the other hand, if Ethereum gains upside momentum and pushes through 23.6% Fibonacci, now intra-day resistance, it would indicate a bullish reversal.

However, for such a reversal to be confirmed, Ethereum would need to have the momentum to push through the 38.2% Fibonacci at $2478.8. In such a situation, Ethereum could easily test new highs over the weekend.

Litecoin had a mixed day in Thursday trading, an indicator of a crypto that is still trying to find direction.

It started the day bullish after the 200-day support at $166.60 held on Wednesday night. It tested this price level again in early Thursday trading forming a double bottom.

This saw it rally all through until the afternoon. However, it did not have the momentum to push through key multiple-day resistance at $174.69.

This saw bears take control and reverse the trend. The reversal was so strong that it pushed through the 61.8% Fibonacci support $167.75 with high volumes.

Pushing through this support saw Litecoin eat into all the gains it had made earlier in the day. By end of day Thursday, Litecoin was trading at $163.46 on the 50.0% Fibonacci.

This support held and saw bulls take control in the early morning hours of Friday trading.

Litecoin is currently trading at $165.2 and is down by 3.47%. It started the day bullish and gained for the first few hours of the day. 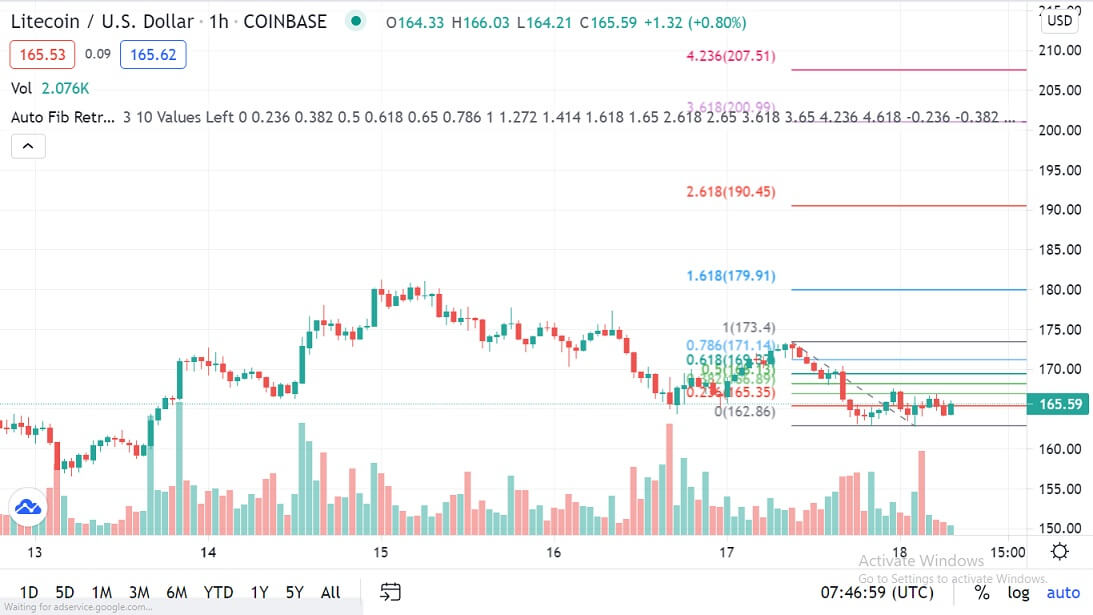 Litecoin has strong support at $163.46 on the 50.0% Fibonacci. If bears take control in the day, and this support is broken, Litecoin could be red all day.

If the selloff is strong enough for Litecoin to push through the 38.2% Fibonacci support at $159.08, then it could mark the beginning of a bearish trend that could last into the weekend.

However, if there is little momentum in the broader market, then Litecoin could trade in a range between the 50.0% Fibonacci support, and the 61.8% Fibonacci resistance at $163.46 and $167.75 respectively.

Ripple’s XRP was bearish all through Wednesday. However, it had hit support at $0.8275 on the 23.6% Fibonacci.

This support was quite strong, and XRP bounced off it in early Thursday trading. It tested it once more and it held. This saw it rally until midday when it hit resistance at $0.8551 on the 38.2% Fibonacci.

However, without support from the broader market, XRP bulls lost momentum. That’s when XRP started trending lower and sustained a bearish trend all through the day.

Ripple’s XRP is currently trading at $0.8372 and is down by 2.65%.  It started Thursday trading along the 23.6% Fibonacci support and has been trading along it all morning. 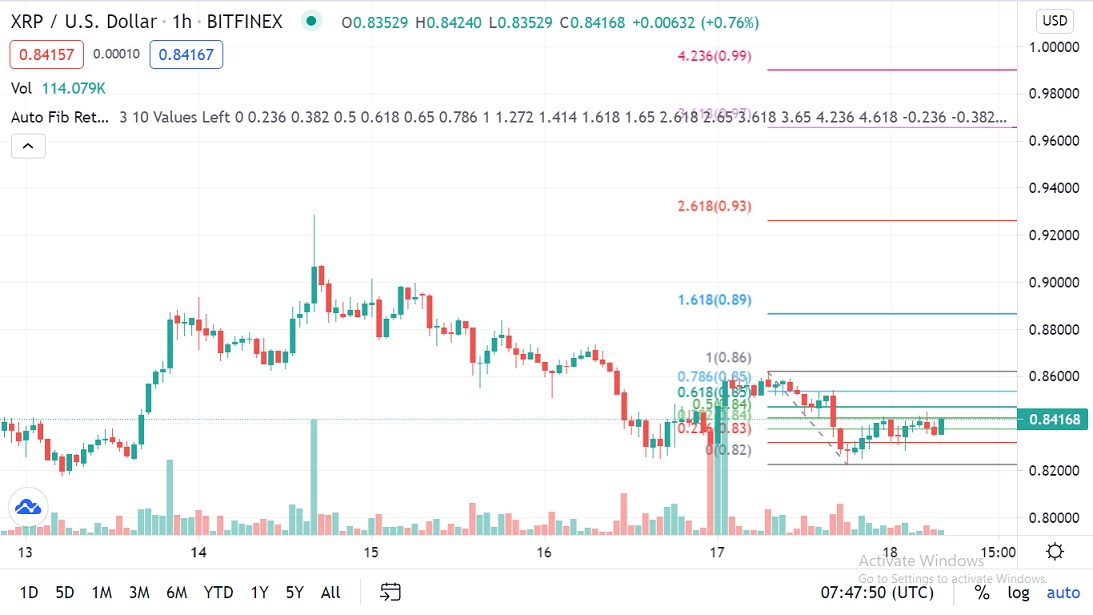 In the day, the 23.6% Fibonacci support at $0.89275 will be the level to watch. If the bearish sentiment is strong and this support is broken, then it could mark a pretty bearish day for XRP.  In such a scenario, XRP could test lows below $0.80 in the day.