Support levels hold after Monday’s selloff – If not broken, crypto majors could consolidate in the day

Ethereum started the week bearish and erased some of the gains that it had made on Sunday evening.  By the end of the day, Monday, it was down by 9%.

Ethereum was making marginal gains on Sunday evening and closed the day at $2256.36, a key resistance level on the 50.0% Fibonacci.

However, with broader market momentum turning bearish, Ethereum could not break through this resistance. The result was a sell-off all through the early morning hours.

By daybreak, Ethereum was trading at $2166.73 on the 38.2% Fibonacci support level. This support level did not hold and Ethereum kept edging lower.

It is after breaching the 38.2% Fib support that the real sell-off started. This was primarily driven by bearish news from China.

The market was hit by news that China was shutting down the remaining Bitcoin mining operations. The result was a 17% drop in the BTC hash rate and a collapse in the price from $34 to $32k. Ethereum and the rest of the crypto market followed in the selloff.

By afternoon, Ethereum had breached the 23.6% Fibonacci support at $2054.24. It also breached the psychologically important $2000 support level.

The result was a further drop that saw it test lows of $1874 in the day. However, by late evening, Ethereum was getting oversold, and buyers looking to take advantage of the low prices were starting to take positions.

This was evident in the green candles that started appearing all through the evening, despite the sustained sell-off.

Ethereum being oversold was also evident in the fact that the price held above the $1874 support level until the end of the day.

This is an indicator that bears are still firmly in control in the broader crypto market. 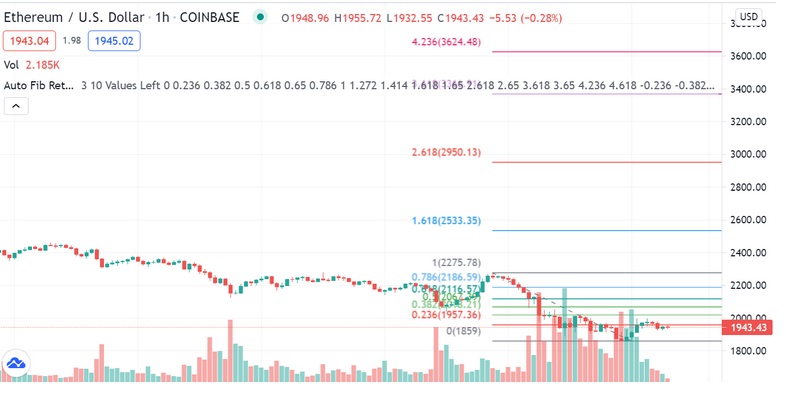 However, such a scenario may be unlikely in the day, as the key reason behind the price collapse has already been factored into the market.

The more likely scenario would a price consolidation. Ethereum could trade between the $1874.98 support and the 23.6% Fibonacci resistance on the upper side in such a scenario.

Another scenario, though unlikely within Tuesday, would be a bullish reversal that could see Ethereum break through the 23.6% Fibonacci resistance at $2054.24.

If this happens, then the next level to watch would be the 38.2% Fibonacci at $2166.73. Considering the magnitude of the news that caused the market to collapse, this scenario is highly unlikely within the next 24-hours.

Litecoin was strongly bearish in Monday’s trading session. This saw it erase most of the gains that it had made in late Sunday trading. By end of day Monday, Litecoin was lower by 9%.

Litecoin started Monday’s trading at $157.48 on the 61.8% Fibonacci. However, it did not have the momentum to push through this price level.

The result was a downtrend all through the early morning trading session. By daybreak, it was trading at $143.13 on the 38.2% Fibonacci.

This is also when news hit the markets that China had closed mining operations in one of the provinces where miners were still active.

By early evening, the sell-off had eased off, an indicator that Litecoin was now oversold. However, without much bullish sentiment left in the market, Litecoin entered a late evening range around the 23.6% Fibonacci support.

However, momentum was not strong enough to see it push through the next key support level at $119.91.

This saw it pull back, but it has been unable to retest the 23.6% Fib, which is now intraday resistance.

If bearish sentiment remains strong in the day and the $119.91 support is broken, Litecoin could test prices under $100 today.

However, after such an extended sell-off, this scenario may not play out today. The more likely scenario could be a consolidation between the $119.91 support, and the 23.6% fib resistance at $134.26.

The other scenario would be a bullish reversal that would see LTC break the $134.36 resistance and test the 38.2% fib resistance at $143.13. This is unlikely, though, as the China news has dampened the market mood in the very short term.

Ripple’s XRP was bearish all through Monday. This saw it eat into all the gains that it had made in late Sunday trading. It ended Monday’s trading lower by 9%.

XRP started Monday’s trading session in the green, continuing the gains made in late Sunday trading.

However, bulls were not strong enough to see it test the 61.8% Fibonacci resistance at $0.7894. This saw bears take over, and dominate all through the day.

This support held, and XRP traded along it until the end of the day.

At the time of writing, XRP is trading at $0.6184 and is down by 11.71%. In early Tuesday morning, XRP broke this support and has been trending lower.

However, this support seems to be holding strong at the moment. If it holds all through the day, then XRP could be range-bound for the day. In such a scenario, it could trade between support at $0.5695 and the 23.6% resistance at $0.6535.

If it pushes through the 23.6% Fibonacci resistance, the next key level to watch would be the 38.2% Fib resistance at $0.7054. Pushing through this level would mark the beginning of a bullish reversal.