Ethereum was pretty bearish yesterday, and at some point, was down by 10%. However, by late afternoon, it had shown signs of a recovery. By the end of the day, Tuesday, Ethereum was trading at $1926.02.

Ethereum started Tuesday trading at $1926.02 on the 23.6% Fibonacci support. It rallied off this support in early morning trading, but the momentum was short-lived.

The result was a price drop that saw Ethereum retest the 23.6% Fibonacci support $1926.02. With bearish momentum getting stronger in the broader market, this support failed pretty fast.

Ethereum turned heavily bearish from that point on, and by mid-afternoon, had dropped hard enough to test the $1707.16 critical support level.

However, by the time it hit this price level, the factors behind the crash had faded out. This meant that Ethereum was getting oversold and that there was no momentum to push it through $1707.16.

What followed was a pullback that saw Ethereum retest the 23.6% Fibonacci, which was now intra-day resistance. However, upside momentum was not strong enough, and Ethereum oscillated around this price level all through the evening.

However, the downside was short-lived as three hours into the day, bulls took charge in the broader market, with Bitcoin showing signs of a recovery. 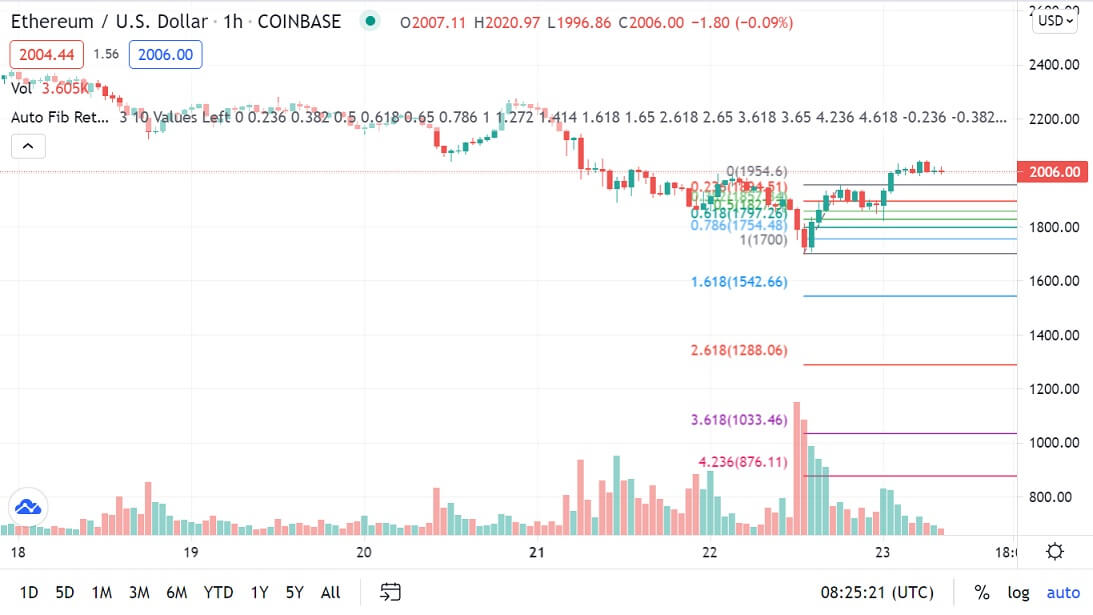 If bulls take charge in the broader market, the key level to watch for Ethereum would be 38.2% Fibonacci resistance at $2061.20.

If the buying momentum is strong enough to push Ethereum through this level, it would confirm a bullish reversal.

However, in the event that Ethereum lacks the momentum to push through the 38.2% Fibonacci resistance in the day, then the key level to watch would be the 23.6% Fibonacci support at $1926.02.

Without much support from the broader market, this support can hold pretty well in the day. It could also mark a range-bound day for Ethereum as the market consolidates.

On the other hand, if the 23.6% Fibonacci support at $1926.02 fails, then it would mark a continuation of the selloff that started yesterday. In such a scenario, the $1707.16 support would be at risk of a breach if it is tested a second time.

If that happens, then Ethereum could see lows below $1500 in the day.  If broader market sentiment is anything to go by, this scenario is unlikely today.

Litecoin was bearish all through Tuesday and continued the selloff that started on Monday. By the end of day Tuesday, it was down by over 10%.

Litecoin started Tuesday trading at $134.21 on the 38.2% Fibonacci support. It quickly broke through this support in the first two hours of the day. This was an indicator that bears were firmly in control of the market.

By daybreak, Litecoin had found support at $123.40 on the 23.6% Fibonacci. This support held, and Litecoin bounced off it for a few hours.

However, by midday, strong bearish sentiment had gripped the entire crypto market. This put pressure on Litecoin and saw it breach the $123.40 support with high volumes.

The result was a drop that saw Litecoin test critical support at $105.62. However, by this time, the broader crypto market was getting oversold.

As such, Litecoin bears did not have the momentum to push through $105.62. This saw it make a minor pullback all through the evening.

By the end of day Tuesday, Litecoin was trading at $123.40 on the 23.6% Fibonacci. This price level was now an intra-day resistance level. 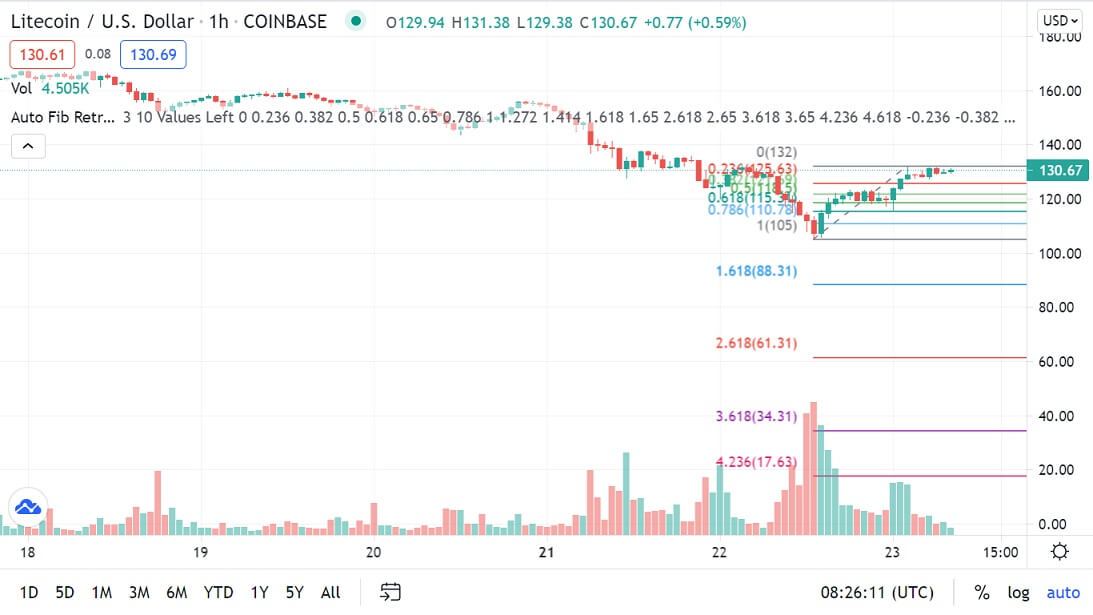 If it has the momentum to push through this resistance, it would mean that bulls are in control, and the bullish reversal is complete.

However, if upside momentum is not strong enough to push through the 38.2% Fibonacci, then the 23.6% Fibonacci support at $123.40 would come into play.

Without a selloff in the broader market, this support could hold and see Litecoin trade in a range all through Wednesday.

However, if the 23.6% Fibonacci support fails, then Litecoin could retest the critical $105.62 support in the day. If this happens and the selloff sustains, prices below $100 could be possible.

Ripple’s XRP was in a selloff all through Tuesday. By the end of the day, it was down by over 12%, extending the losses that started on Monday.

XRP started Tuesday’s trading session bearish after breaching the 38.2% Fib support at $0.669 in the last hour of Monday trading.

It then found some support at $0.6087 on the 23.6% Fibonacci. However, with increased selling momentum in the broader market, XRP breached this support and tested critical support at $0.5106.

The $0.5106 support held, as the whole crypto market quickly became oversold. This saw XRP make minor gains from early evening until the end of the day. 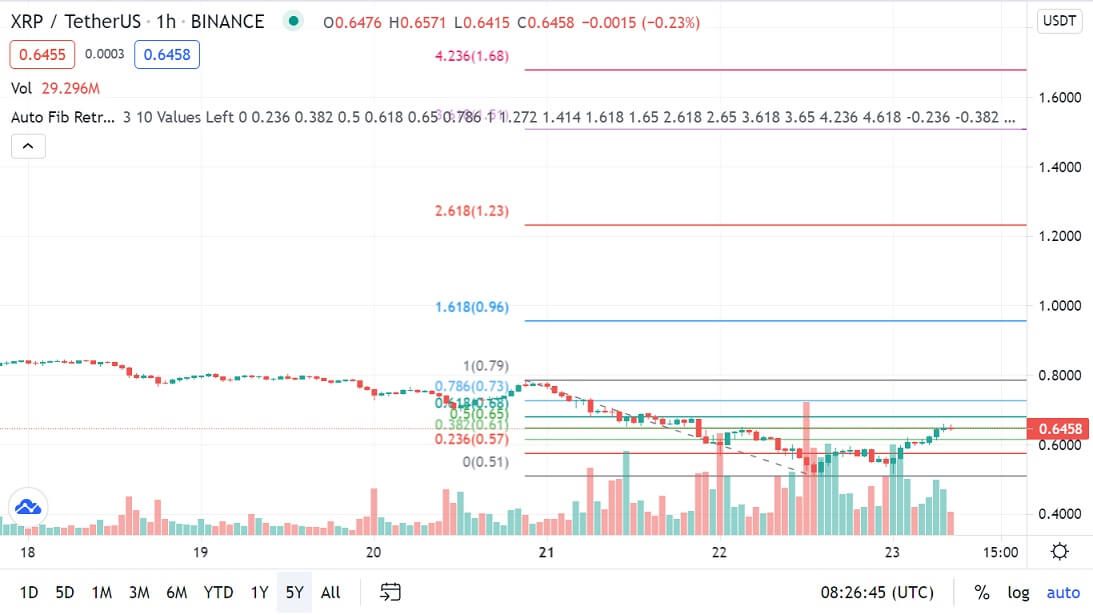 If bulls take control in the broader market, XRP could hold above the 23.6% Fibonacci level, which is now the day’s support.

Unlike the other majors, XRP doesn’t seem to have enough momentum to possibly push it through the 38.2% Fib resistance at $0.6693.

However, if it gains this momentum, then it would be indicative of a bullish reversal. Such a reversal could see it test price levels above $0.71 in the day.

On the other hand, if bulls lose momentum and the 23.6% Fibonacci fails, then the critical $0.5106 support would come into play. If it fails, XRP could test lows below $0.45.