Ethereum started Tuesday trading bearish. On Monday night, it breached key support at $2721.0 on the 23.6% Fibonacci. This coupled with a selloff in the broader market, saw it start Tuesday strongly bearish.

Ethereum was trading at a key support level at $2454.2 on the 61.8% Fibonacci by early afternoon. The selloff was so strong that this support was broken for a few hours.

However, by late afternoon, the broader market was mainly in oversold territory. This saw bulls regain some strength to rally back through the 61.8% Fibonacci. Ethereum kept gaining for the better part of the day.

By the end of day Tuesday trading, Ethereum was trading at a key resistance level at $2536.7 on the 50.0% Fibonacci.

At the moment, Ethereum is trading at $2475.58 and is up marginally by 0.52%. It started the day while trading at the 50.0% Fibonacci resistance. However, it did not have much momentum to push through the resistance.

This saw bears take control from the first hour of the day. By daybreak, Ethereum had retested the 61.8% support at $2454.2. At the time of writing, it was still oscillating around this price level.

Ethereum is trading at key support, and the direction it takes in the day will depend on how it plays out around this price level.

If market-wide momentum turns bullish, and the 61.8% Fibonacci at $2454.2 holds, then Ethereum could experience some gains in the day.

In such a scenario, the 50.0% Fibonacci at $2536.7 would be the first resistance to watch in the day. If there is strong enough momentum to push through this resistance, then there would be a chance of Ethereum erasing all the losses it made in Tuesday’s trading session.

The next key support from that level is at around $2295.5. Getting to this level would also confirm a bear trend that could last into the weekend.

On the other hand, if there is little to no momentum in the broader market, then Ethereum could trade in a range for the day. In such a scenario, it could find support on the 61.8% Fibonacci at $2454.2 and resistance at the 50.0% Fibonacci at $2536.7.

Litecoin was deep in the red in Tuesday’s trading session. By the end of the day, it was trading at $159.51.

Litecoin started Tuesday trading bearish, a continuation of a rend that began on Monday. This bearish momentum saw Litecoin breach key support at $165.09 on the 38.2% Fibonacci.

This saw it trade lower for the better part of the morning. By mid-morning, Litecoin was trading at $157.53, a key support level on the 23.6% Fibonacci.

However, the broader market selloff was so strong that this support could not hold. Litecoin dropped further, but by midday, the overall market was getting into oversold territory.

This saw Litecoin gain some upside momentum, and start recovering some of the losses from earlier in the day.

Litecoin is currently trading at $159.22 and is up by 1.82%. It started the day bearish and was trending lower for the better part of Wednesday morning.

Litecoin’s bearish start to the day is due to its failure to test key resistance at $165.09 on Tuesday evening. This was an indicator that bulls were not strong enough to pull through with a bullish reversal. 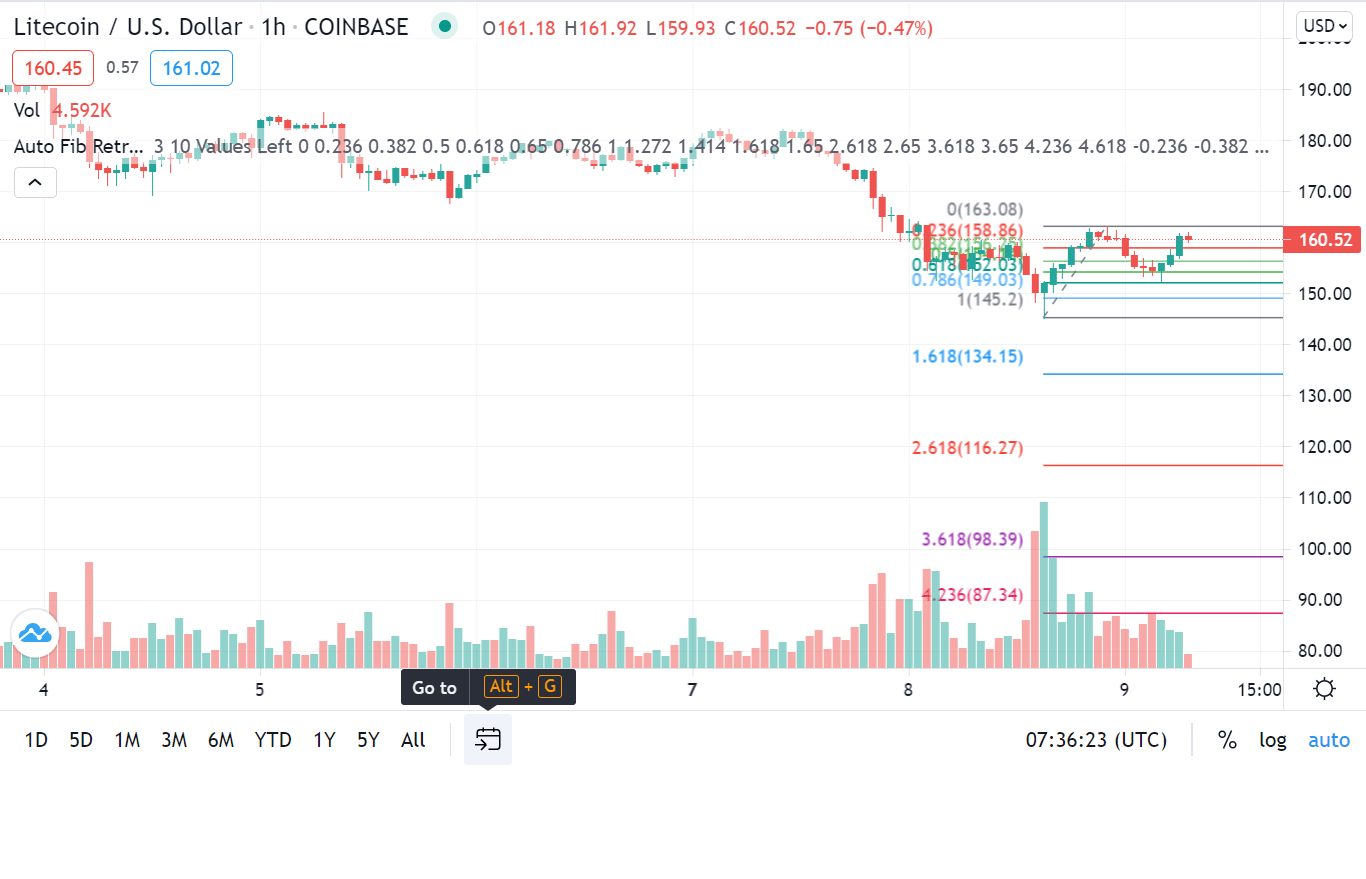 Litecoin is currently oscillating at a key support level at $157.53 on the 23.6% Fibonacci. If in the day bulls take control in the broader market, the key level to watch would be the 38.2% Fibonacci resistance at $165.09.

If the upside momentum is strong enough to push LTC through $165.09 and hold, it would be indicative of a bullish reversal. This could see it test new highs in the day.

On the other hand, if there is another selloff in the broader market, and the 23.6% Fibonacci support breaks, then Litecoin could test new lows in the day. In such a scenario, prices below $150 could be a possibility.

Ripple’s XRP like the rest of the market was largely bearish in Tuesday’s trading session. It recorded dips of up to 10% in the day. By end of day Tuesday, it was trading at $0.873.

Ripple’s XRP started Tuesday trading bearish. This was after key resistance at $0.903 on the 38.2% resistance failed to hold.

By afternoon, it had tested lows of $0.78. However, after such a heavy selloff, the market entered oversold territory.

This saw XRP, and all major cryptos start gaining upside momentum. This continued for the rest of the day. By the end of Tuesday, XRP had rallied through the 23.6% fib at $0.858, which was now intra-day resistance.

Ripple’s XRP is currently trading at $0.869 and is up by 2.34%. It started Wednesday’s session bearish after the Tuesday night recovery failed to push it to the critical 38.2% fib resistance at $0.9033.

If in the day bears retake control in the broader market, then the key level to watch would be the 23.6% fib, which is key intra-day support. If it fails, then XRP could test lows below $0.80 within the day.

On the other hand, if bullish sentiment pushes XRP through the 38.2% resistance at $0.9033, it would indicate a bullish reversal. Such a move could see XRP erase all the losses from Tuesday’s session.

The other scenario would be a range-bound day. If there is little momentum in the broader market, XRP could trade in a range between the 38.2% Fibonacci resistance, and the 23.6% Fibonacci support.