Major cryptos trading at support levels – If these levels hold, it could be a bullish week

Ethereum dropped by about 7% in the week ending June 13th. It was trading lower for the whole week, and by Sunday night, was at $2510.20.

Ethereum started last week bearish. This was a continuation of the bearish momentum that started in the week ending 5th June.

This followed bull’s failure to push through the 38.2% Fibonacci at $2821 in the week ending 5th June.

Bears took control of Ethereum up to mid-week. At this point, bulls tried to take charge after Ethereum hit key support at $2412.12 on the 100-day moving average.

However, due to strong bearish sentiment in the broader market, bulls could not rally Ethereum further.

This saw bearish momentum persist all through the week. By Saturday, Ethereum had tested key support on the 50.0% Fibonacci at $2352.18.

This support held, and all through Sunday, it rallied, signaling a potential bullish reversal this week.

Ethereum is currently trading at $2485.20 and is up by 6.50%. It started the week with the buying momentum that started yesterday.

However, it has eased up a little in the last few hours, but it is yet to reverse the gains it made on Sunday. 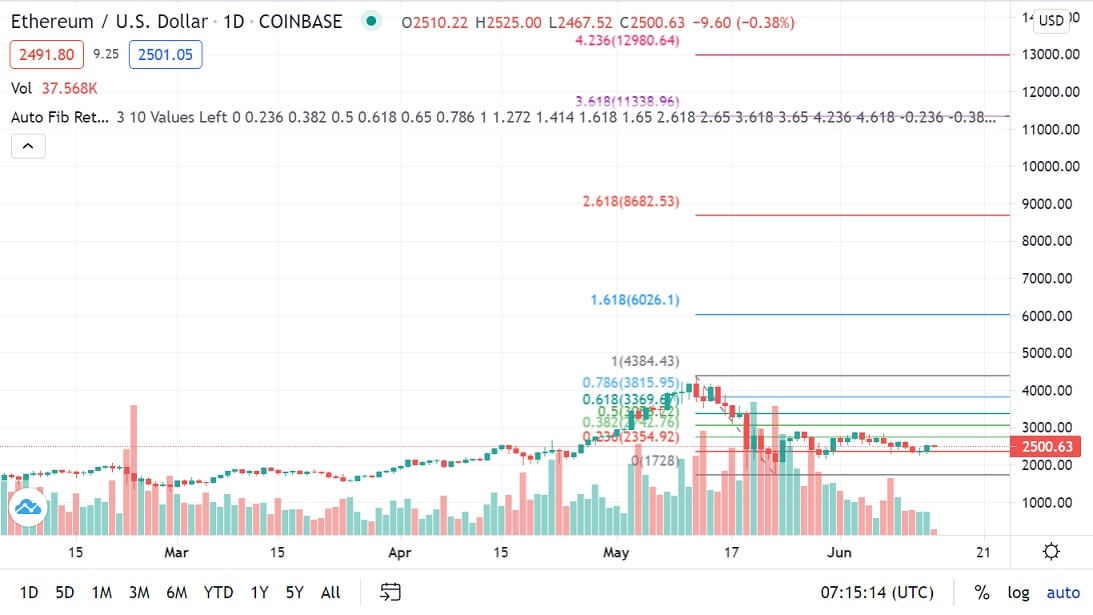 Ethereum is currently trading at a key support level on the 100-day moving average at $2486.50.

If the market keeps gaining upside momentum as it has done since yesterday, then this support could hold.

Such a scenario could see Ethereum rally for the week, with the next key target being the 38.2% Fibonacci resistance at $2821.80.

If the momentum is strong enough to push it through this level, then it would mark the beginning of a bull trend. If supported by strong bullish momentum in the broader market, such a trend could see it test prices above $3500 in the week.

This is the next key support level on the 50.0% Fibonacci. A push through this level would be a signal to strong bearish sentiment.

Such could mark a reversal that could see Ethereum test price levels below $2k. A key level to watch in such a scenario would be $1873.16 at the 61.8% Fibonacci.

Litecoin traded in a range all through last week and ended higher by 0.80%. It started the week with minor gains that saw it reverse some of the losses it made in the previous week.

However, without much support from the broader market, Litecoin could not sustain much upside momentum. Bears were not that strong either and could not push Litecoin lower.

Essentially, there wasn’t much going on for Litecoin last week. At the moment, Litecoin is trading at $169.30. It has started the week with some bullish sentiment and is currently up by 7.48%. 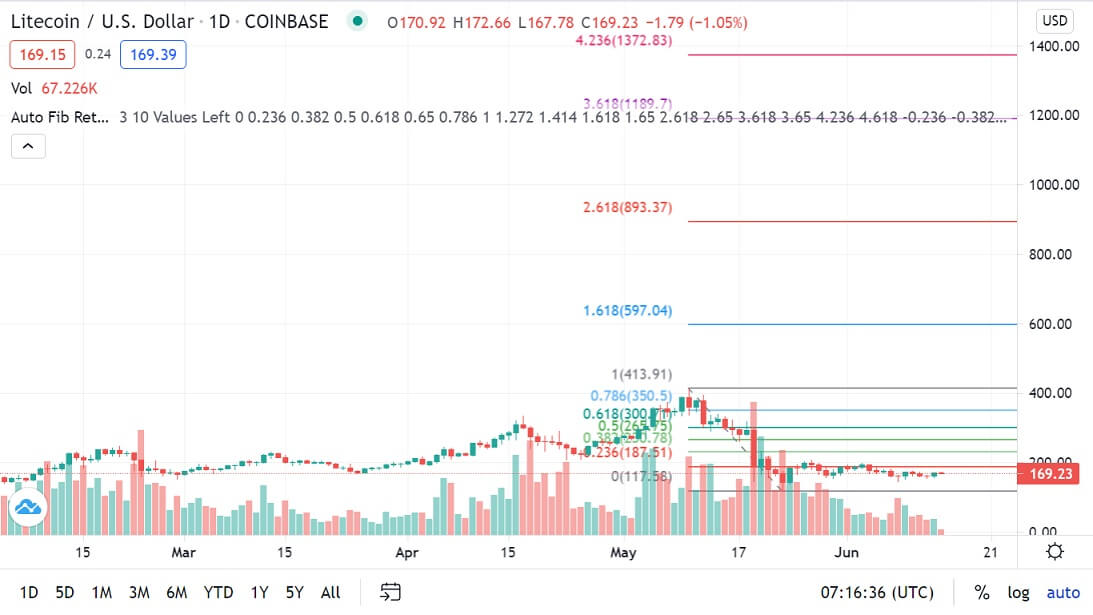 Litecoin has started the week slightly bullish, driven by the momentum in the broader market.

If the broader market keeps gaining, then the next key level to watch for Litecoin is the 61.8% fib resistance at $190.48.

A push through this level would mark the beginning of a Litecoin bull trend that could last through the week.

On the other hand, if the momentum turns bearish in the broader market, the key level to watch for LTC would be its 3-week low of $137.85.

If it pushes through this level, then it could mark the beginning of a short-term bear trend.

However, if there is little momentum in the broader market, then Litecoin could continue trading in a range, just like last week.

Ripple’s XRP was largely bearish last week. By the end of day Sunday, it was trading at $0.8757. It ended the week lower by 9%.

XRP started last week bearish. This was in continuation of a bear trend that started in the week ending 5th June.

At the start of the week, XRP was trading at $0.855 on the 61.8% Fibonacci.  This reenergized bulls after a couple of days in the red.

However, without support from the broader market, XRP bulls could not push it higher. This saw the first three days of the week end in a tussle between bulls and bears.

This saw it trend lower all through into the weekend. However, following an increase in bullish momentum in the broader market on Sunday, XRP recovered some losses. 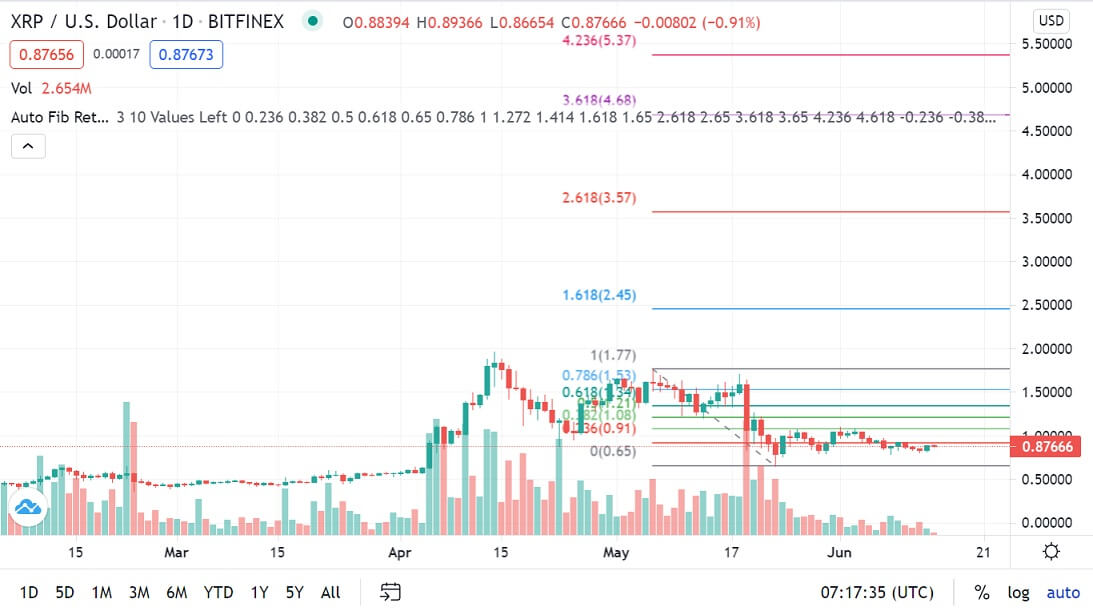 In the week, the key level to watch will be the 61.8% fib support at 0.85559. If it holds and buying momentum increases in the broader market, then XRP could test new highs in the week.

In such a scenario, the next key level to watch would be the 50.0% Fibonacci at $1.0673. This is a key resistance for XRP, and if broken, could see XRP rally through the week.

On the other hand, if broader market momentum turns bearish, and the 61.8% fib support fails, then XRP could trend lower in the week.

In such a scenario, the key level to watch would be the 200-day moving average at $0.72. If this fails, it could mark the beginning of a short-term bear trend that could spill over next week.

However, if there is little activity in the broader market, XRP is likely to oscillate around the 61.8% Fibonacci throughout the week.