Key resistance levels at play in the day – If they fail, bears could take control all-day

Ethereum was trending downwards for the better part of Tuesday.  This saw it eat into most of the gains it had made on Monday. By the end of day Tuesday, it was trading at $2518.14.

Ethereum started Tuesday in the green, a continuation of the upside momentum that started on Monday. It rallied all through the morning until it tested resistance at $2614.7 on the 61.8% Fibonacci level.

However, it did not have the momentum to push through this price level and test new highs. The result was a correction that saw it come close to the 50.0% Fibonacci support at $2546.8 by midday.

Failure to test this support saw it gain some upside momentum, and trade upwards for about 3-hours. However, the momentum was not strong enough, and the downside momentum continued.

By early evening, Ethereum shot up again, but for the second time, failed to retest the 61.8% resistance. This was a confirmation of a lack of upside momentum, and by the end of the day, it had breached the 50.0% Fibonacci support.

However, in the early hours of the day, it gained some upside momentum. Failure to get back through the 50.0% Fibonacci saw bears push it down further by daybreak. It is currently trading in a range. 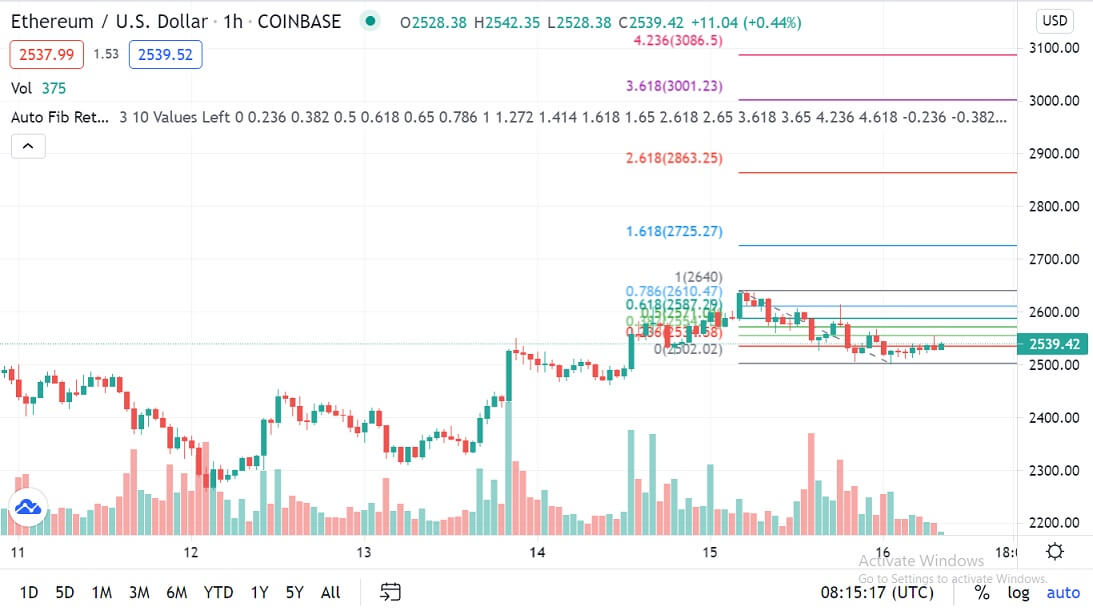 In the day, Ethereum’s direction will depend largely on the direction of the overall market.  In the event that bears take control in the broader market, the key level to watch for Ethereum will be the 38.2% Fibonacci at $2477.5.  This is a key support level in the day.

If it is broken, then it could mark a relatively bearish day. The next level to watch in such a scenario would be the 23.6% Fibonacci support at $2391.8.  Breaching this level would mark the beginning of a bear trend that could last a couple of days.

However, for a clear bull trend in the day, Ethereum would need to push through the 61.8% Fibonacci resistance at $2614.7. Pushing through this level with high volumes could see Ethereum trade higher for a couple of days.

On the other hand, if the broader market is directionless in the day, Ethereum could possibly trade between in a range between $2477.5 and $2546.8.  These are the 38.2% Fibonacci support, and the 50.0% Fibonacci resistance respectively.

Litecoin had a pretty mixed day on Tuesday, but it still managed to trade above Monday’s closing price. By end of day Tuesday, Litecoin was trading at $172.66.

Litecoin started Tuesday’s trading session on a high note. This was a build-up to the momentum that started on Monday.

However, without much support from the broader market, Litecoin could not sustain upside momentum. This saw it trend downwards for the better part of the morning.

By midday, it had tested key support at $172.52 on the 50-day moving average. Litecoin then gained some upside momentum at this level and gained for the better part of the day.

However, by early evening, a selloff in the broader market saw Litecoin reverse, and retest this support. It breached it briefly in the last hour of the day, before bouncing off it.

Litecoin is currently trading at $174.36 and is down by 2.54%. It started the day in the green after the 50-day moving average support held in late Tuesday trading.

However, this momentum was short-lived.  Litecoin failed to push through a 48-hour resistance at $175.47. This saw it turn bearish in the early hours of the day, and test key support at $169.92 on the 61.8% Fibonacci retracement.

It has tested this price level twice and has now formed a double-top around it at the time of writing. 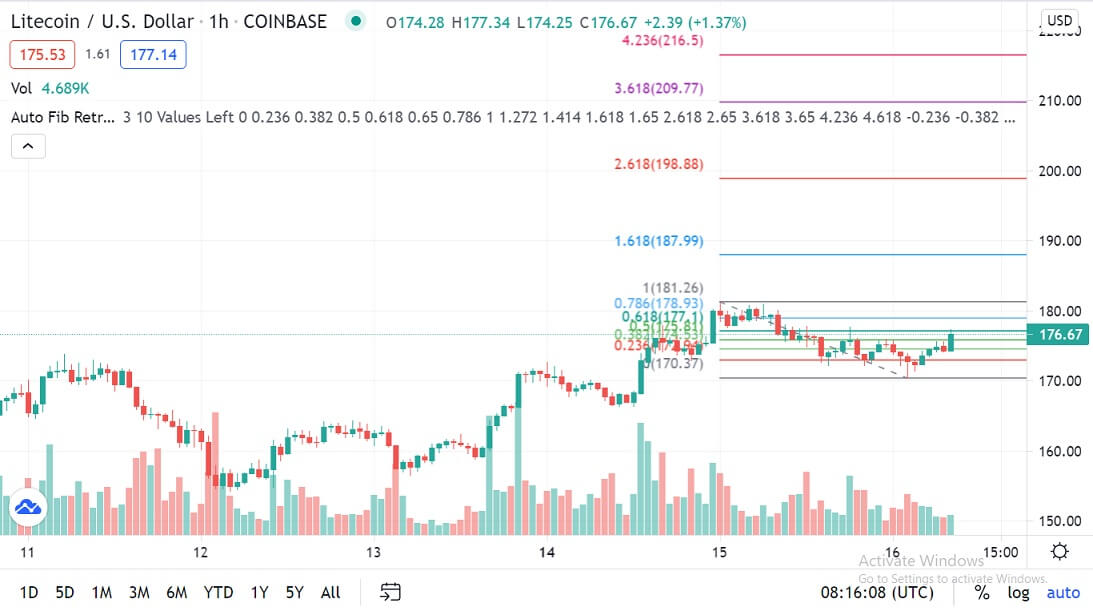 In the day, the key level to watch will be the 48-hour resistance of $175.47. In the event that Litecoin breaks this resistance, and with high volumes, then it would be an indicator of bullish strength.

In such a scenario, the next key level to watch would be the 48-hour high of $180.73. It could also mark the beginning of a rally for the better part of the day.

On the other hand, if Litecoin fails to push through the $175.47 resistance, then it would be an indicator of low upside momentum. In such a case, bears could take control, with key support at $169.92 on the 61.8% Fibonacci being the next target.

If Litecoin drops and this support fails, then the next key level to watch would be $165.13. This is a key support level on the 50.0% Fibonacci. Failure for this level to hold would mark the beginning of a multiple-day bear trend for Litecoin.

Ripple’s XRP has a bearish day, Tuesday, and erased some of the gains it had made on Monday. It closed Tuesday trading at $0.868.

It traded along this price level for a few hours before bears pushed it lower. By midday, it had dropped to test key support on the 38.2% Fibonacci at $0.8638.

This support was strong and held for the better part of the day. Nonetheless, there was little upside momentum in XRP, and it ranged around this support all through the day. 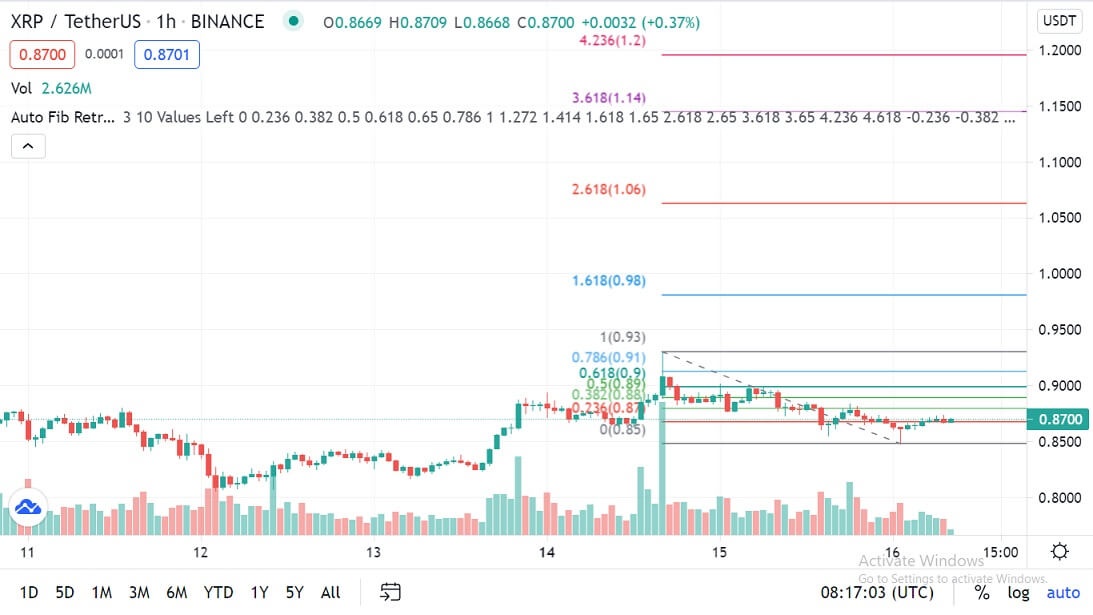 The 38.2% Fibonacci support at $0.8638 will be the key level to watch in the day. If bearish sentiment rises, and XRP breaches it, then it could be a red day for this crypto.

However, if it bounces off this price level, then $0.888 would be the price to watch. This is now a key intraday resistance on the 50.0% Fibonacci.

If bullish sentiment is strong enough for XRP to push through this price, then the 61.8% Fibonacci would come into play.  Getting through this level would lead to a pretty bullish day for XRP.