Key support levels at play as bears take control – If broken, it could be a bearish week, but if they hold, crypto majors could be range-bound this week

By close of the week ending June 13th, Ethereum was trading at a key support level on the 50.0% Fibonacci. This support held strong and gave bulls momentum early last week.

This saw Ethereum gain all through Monday, and a part of Tuesday. However, within the day, Tuesday, overall market momentum turned bearish. This saw Ethereum form a bearish reversal pattern by the end of the day.

The bearish sentiment was confirmed on Wednesday when Ethereum broke the 100-day moving average at $2477.60. This energized bears to drive the price lower through the day. By the end of the day Wednesday, Ethereum was trading at the 50.0% Fibonacci support at $2370.97.

This support was quite strong. Despite the broader market putting so much pressure on the price, Thursday ended in a tie between bulls and bears along this support level, but with the price slightly below it.

This signaled to the bears that despite the spirited push by buyers, overall momentum was bearish. Bitcoin, and the broader market confirmed this bearish strength on Friday.

All through Friday, Ethereum was strongly bearish as bulls lost all momentum they had gathered on Thursday.

By the weekend, Ethereum was getting into oversold territory after close to two weeks of selling. This saw it make small gains on Saturday and Sunday.

However, the gains were not strong enough for Ethereum to retest the 50.0% Fibonacci, which was now weekly resistance. This was a signal that bears are still firmly in control.

Ethereum is currently trading at $2119.46 and is down by 3.76%. It has been in the red all through Monday morning, and has eaten into the gains it made in the weekend. 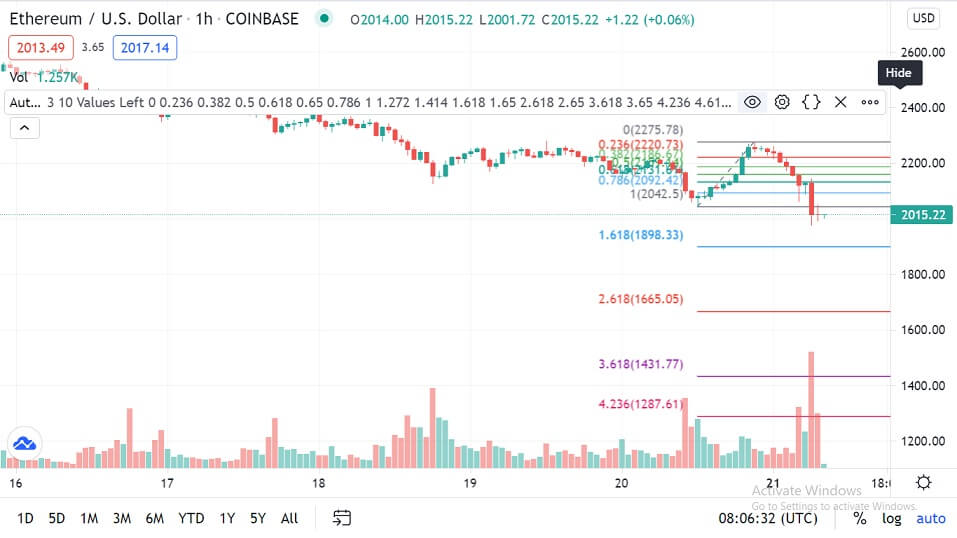 Ethereum is bearish at this point but is yet to test key weekly support at $1901.34 on the 61.8% Fibonacci. This price level is also one where there is strong support from the 200-day moving average.

If this support is broken, it could mark the beginning of a strongly bearish week for Ethereum. Prices below $1500 would be possible in such a setup.

However, in the event that this support holds, there would be a likelihood of Ethereum trading in a range between the 61.8% fib support and the 50.0% Fibonacci resistance.

A sharp bullish reversal may be unlikely this week, but if it happens, Ethereum could face some strong resistance at $2849.98 at the 38.2% Fibonacci. A push through this level could see Ethereum test $3000 within the week.

Litecoin was bearish all through last week. This was after bulls lacked the momentum to push it through the 61.8% Fibonacci resistance in the week ending June 13th.

It made marginal gains all through Monday but failed to test the critical 61.8% Fibonacci resistance.

The result was a sharp reversal in late Tuesday trading that saw it form a bearish reversal pattern.

With the broader market turning bearish, and a reversal pattern confirmed, Litecoin started Wednesday trading in the red. It traded in bearish territory from Wednesday until Friday.

By the weekend, it was pretty much oversold, and buyers started taking positions. This saw it make minor gains.

However, the gains made were not strong enough to see Litecoin even come close to testing the 61.8% Fibonacci resistance at $187.91.

This was an indicator of a strong bear grip on this crypto and has seen it start the week bearish. The strong bearish sentiment in the broader market has added to the downside pressure.

At the moment, Litecoin is trading at $140.85 and is down by 8.27%. It has been in the red for the better part of Monday morning, and the bearish sentiment does not seem to be easing up. 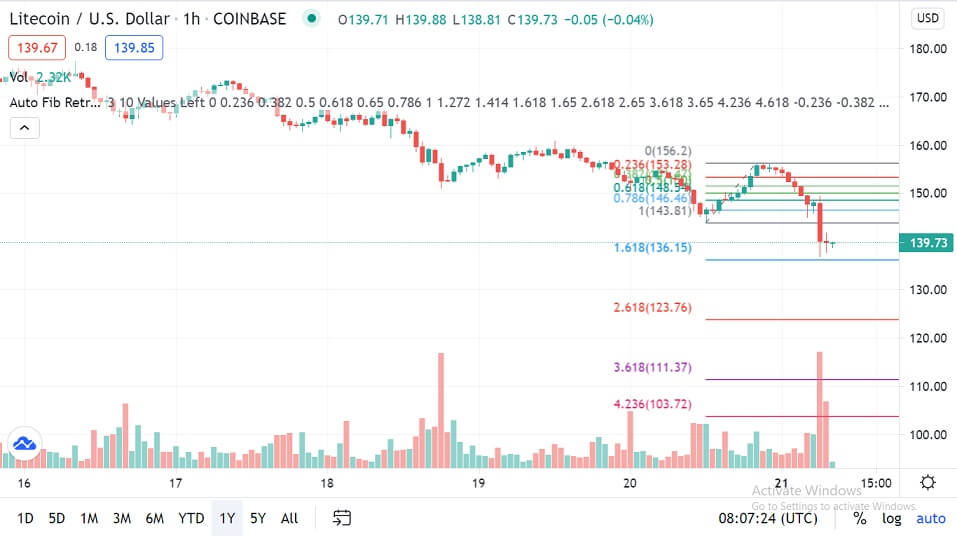 In the week, Litecoin is trending towards multiple-month support at $123.43. If this support fails, then Litecoin could be at risk of testing price levels below $100.

Ripple’s XRP was bearish all through last week. This was a continuation of the bearish sentiment that started in the week ending June 13th.

XRP started last week with a little bullish momentum, spilled over from weekend trading in the week ending June 13th. However, this momentum was not strong enough to push it through the 61.8% Fibonacci resistance at $0.8973.

This saw it turn bearish all through the week, with no noticeable signs of a bullish reversal.

By the weekend, XRP was in oversold territory. This saw it turn green over the weekend. But even then, the momentum was pretty low, and bulls did not get close to testing the 61.8% Fibonacci resistance.

At the time of writing, XRP is trading at $0.697 and is down by 9.10%. It is a continuation of the bearish momentum that started last week. 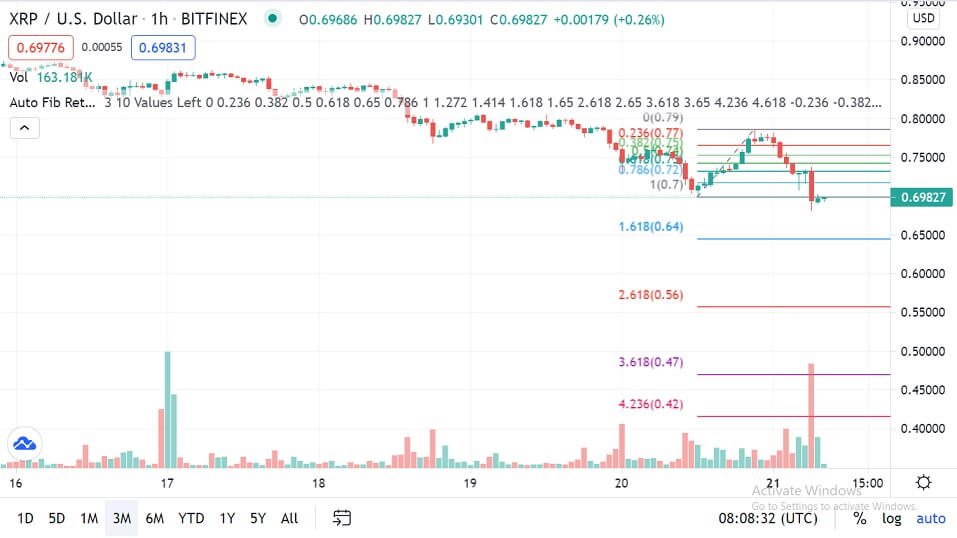 XRP is quite bearish at this point and has broken the 200-day moving average support at $0.726.

If bearish sentiment in the broader market persists, then the next key support level to watch would be $0.437. This is multiple-month support for XRP.

If it is broken, there would be a possibility of XRP testing prices below $0.30 in the week.

A major bullish reversal may be unlikely this week, but if it happens, $1 would be the target at the 50.0% Fibonacci.